Shock, betrayal and fear: Why Gantz killed his party to join Netanyahu

Young, with underlying conditions, Blue and White joins the coronavirus death toll. Many fear Netanyahu will prove its demise was in vain 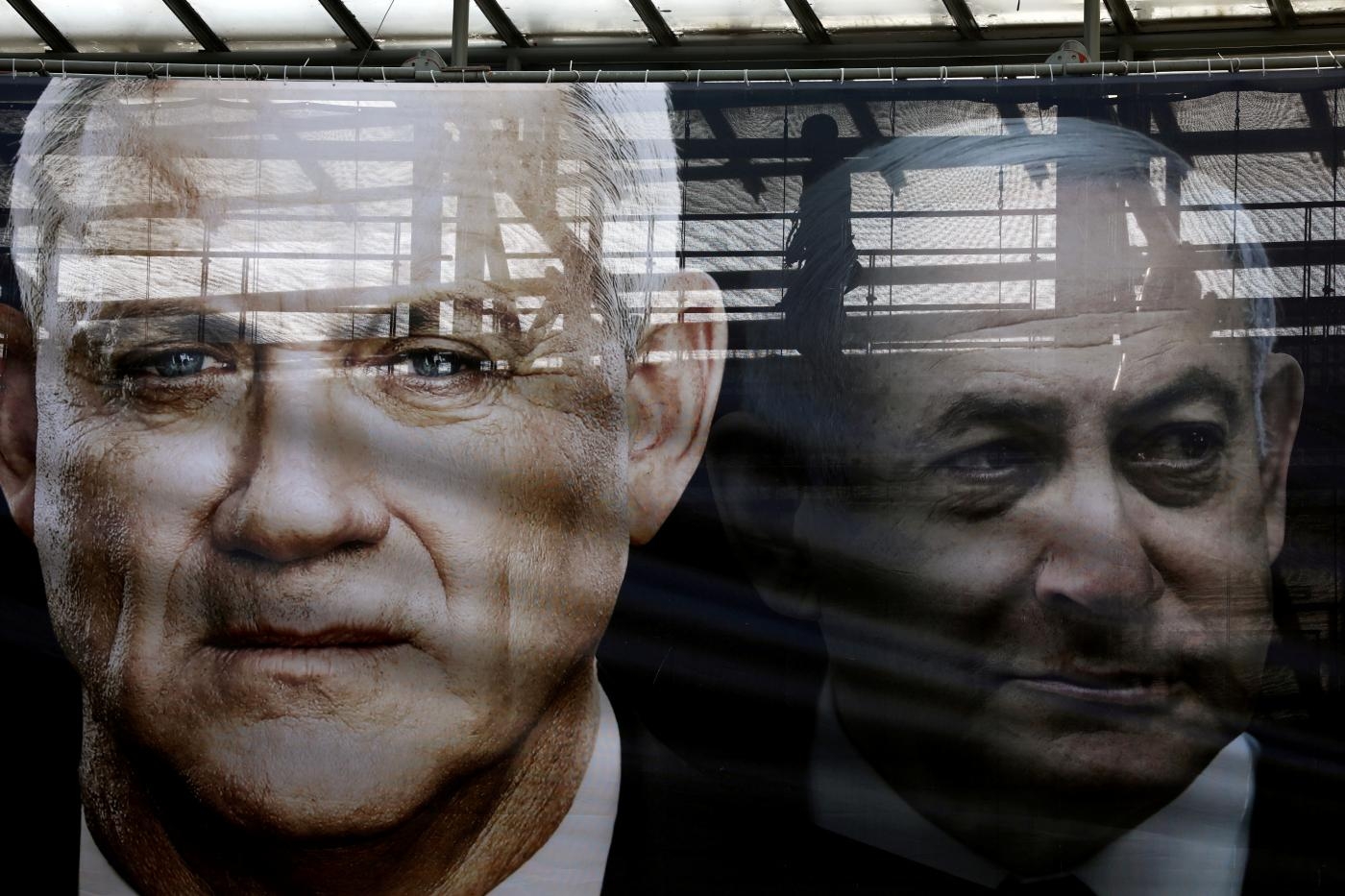 A banner of Benny Gantz and Israel Prime Minister Benjamin Netanyahu seen in Tel Aviv ahead of this month's elections (Reuters)
By
Lily Galili
in
Tel Aviv, Israel

If you had a hard time getting used to the idea of hearing “Benny Gantz, prime minister of Israel”, relax. You can now go safely back to what you have already known for 11 years.

You have Gantz himself to thank for making this easier for you. In a strange turn of events, the head of the Blue and White party who had the mandate to form a government and oust Netanyahu decided on Thursday to join his arch rival in a unity government and serve as minister of defence under him. In the meanwhile, you can practice with a temporary title - “Benny Gantz, speaker of the Knesset”, a position Gantz has now assumed for several days until the two politicians finalise the not-yet signed agreement between them.

The agreement is supposed to be based on rotation and parity: if he remains true to his word – which he rarely does – Netanyahu will step down in September and make room for Gantz as prime minister.

What it really means is that Netanyahu, indicted on charges of corruption, will stay in office and stand trial at the same time. That is the real deal between Gantz, described by Netanyahu as “half baked” and “insane” during the last election campaign, and Netanyahu, defined by Gantz as “corrupt dictator” and “Israeli Erdogan”, a truly derogatory term in our political vocabulary.

Israeli politics has a long history of twists and surprising moves. But this one tops them all and the coronavirus crisis in Israel is the obvious excuse.

“This is what the country needs, and Israel first,” Gantz keeps repeating, as if it is a medically known fact that the virus has a proven fear of unity governments.

If anything, it is the party that Gantz created just a year and a half ago that has emerged as a coronavirus victim, young but with serious underlying medical conditions.

It died on Thursday afternoon when the two other Blue and White factions – Yesh Atid headed by Yair Lapid, and Telem headed by Moshe Yaalon, the two who served under Netanyahu in previous governments and know him best - refused to join the new government Gantz imposed on them.

Blue and White as we know it collapsed within an hour. Lapid and Yaalon will keep the name and Gantz is back to his original ‘Israeli Resilience’ party with 17 Knesset members. Lapid will serve as the head of opposition against the politician who was, until Thursday, his closest political ally

At a press conference on Thursday evening, Lapid did not mince words: “Gantz stole the votes of the people who voted for him when he vowed not to serve under Netanyahu; he caved in to Bibi without a fight.” And he is right.

Knesset member Ahmad Tibi from the Joint List which has 15 MPs who backed Gantz for premiership was quick to coin a new term. Talking to Middle East Eye a few hours after the dramatic turn of events, he used the word “Gantzism” to describe the party leader’s behaviour.

“We backed him to bring about a change after years of incitement against Arabs by Bibi. Only Gantzism can prove that Bibi’s block of 59 is bigger than Gantz’s own block of 61 created with our support,” he said. “Corona pandemic is bad enough. To use corona for political gain is even worse.”

In fact, it feels as if Gantz used the Arab vote and support as spare parts in his political game. But his Jewish voters feel pretty much the same. The words “betrayal” and “traitor” are the most popular ones on social media to describe Gantz’s breach of faith.

Yet truth be told, not all Israelis feel the same, not even all those who voted for him. Blue and White was a strange creation of left-centre-right to begin with.

Most of his centre-right voters praised his move as one made “for the sake of Israel”. Not so happy are the far-right supporters. All plans for the annexation of the occupied West Bank - which Blue and White broadly opposed when Trump's 'deal of the century' was announced - will be postponed.

As long as Trump has Netanyahu’s back, who cares about the rest of the universe?

Likud voters, on the other hand, are happy because they will get to keep their cherished PM Netanyahu. Likud Knesset members and ministers are less enthusiastic. They will lose some major portfolios now offered to Gantz.

The main loss for Netanyahu is not the foreign affairs portfolio which will now be offered to Gabi Ashkenazi, Gantz’s ally and a promoter of this unity government. As long as Trump has Netanyahu’s back, who cares about the rest of the universe?

No, the proof of how important this unity deal was to Netanyahu is the fact that he gave up on the two portfolios he cherished most, justice and communication.

Netanyahu is obsessed with media coverage and an obedient justice minister would certainly be an asset while he is on trial. Remaining in office and appearing in court as prime minister as he is now scheduled to do in May would have made a compliant minister all the more valuable.

That explains Netanyahu’s part. But why did Gantz so abruptly do what he could have done two rounds of elections and six billion shekels ($1.6bn) earlier? There are many answers to this question, and the real answer is probably a combination of all of them.

One reason not yet articulated is that he never really wanted to assume responsibility in the midst of a huge coronavirus crisis and the major financial crisis to follow. He lacks the self-confidence needed.

The more practical explanation lay in the recent polls ordered by the party. They were bad. Blue and White was losing support, Likud was gaining support. A fourth round of elections was no option, not just because of the roaring coronavirus but also out of fear of the results.

Insiders in what was once Blue and White claim that, contrary to other polls, the ones they had seen showed that their voters strongly opposed a minority government backed by the Joint List.

Netanyahu was the first one to detect that mood. When the parliamentary welfare committee was offered to the Joint List, he retweeted an outrageous post saying that “terror supporters” would now be in charge of bereaved families, a message that captured the spirit of large parts of Israeli society.

There is a huge difference between the answers liberals give to opinion pollsters affirming support for the Joint List - and actually accepting it.

Unfortunately, this is not yet the zeitgeist in Israel, which is still very much a racist society, and it was quite naive to think anything differently of Gantz, a former military chief of staff who launched his political campaign by publishing the number of dead Palestinians he left in Gaza during Operation Protective Edge.

He is not racist Netanyahu, but still. This was as expected, one step too far for him. When push comes to shove, he could not do it. Neither could his partner, another former military chief of staff, Gabi Ashkenazi. So they took the more popular road.

Most Israelis do, in fact, favour a unity government. Worn out by three rounds of elections in one year, exhausted by the brutality of the campaigns and ruthless politicians, and now terrified by coronavirus, they opt for some peace of mind.

Democracy can be put on hold. Knesset member Yuli Edelstein, former speaker of the parliament who defied a Supreme Court ruling like no one did before, can safely resume his high office. The demonstrators who took to the streets despite the dangers of coronavirus can fold their black flags.

Yet if – and when – the unity government is formalised, the big question remains: will Netanyahu really step down in September 2021?

Talking to MEE the morning after Thursday’s drama, Tzachi Hanegbi, minister of regional cooperation and a Likud member, sounded optimistic.

“Contrary to his public image as one who avoids tough decisions and conflicts, accepting Netanyahu’s call for unity, Gantz manifested leadership and responsibility,” Hanegbi said. “Despite the personal price he had to pay, the Gantz-Netanyahu alliance can produce trust and harmonic cooperation for the next three years.”

Retired Major-General Amram Mitzna, who once led the Labor Party and knows Netanyahu well, was much less enthusiastic.

“Sense of betrayal and a shock,” he told MEE, describing his feelings about what has come to pass.

“There are some extenuating circumstances for Gantz who had no real option to form a government. Still, I find it hard to believe that Netanyahu will respect the agreement with Gantz. I just hope he will be deeply absorbed in his trial.” 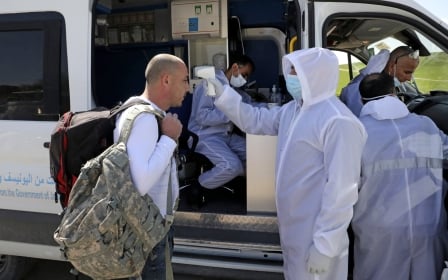