Meanwhile, the Israeli opposition might be headed by a Palestinian-Israeli, as three party leaders lean toward unity government An Israeli soldier walks in front of a Merkava tanks, stationed near the border with the Gaza Strip in southern Israel on 6 May 2019 (AFP)
By
MEE staff

Israel's elections were very nearly interrupted by an invasion of Gaza authorised by Prime Minister Benjamin Netanyahu the day before the polls.

The Ma’ariv newspaper revealed details on how close Israel came to invading Gaza and postponing the elections.

During one of the last campaign speeches given by Netanyahu, rockets fired from the Gaza Strip forced him to seek shelter in the middle of his speech. Opposition leader Benny Gantz mocked Netanyahu as a coward.

In response, Netanyahu announced that an invasion of the Gaza Strip could happen at any moment. He then quickly added that he was prevented from going ahead with the invasion plans because State Attorney Avichai Mandelblit argued that such an attack requires the cabinet's agreement, which can only be made during a physical meeting of the ministers.

It was not until election day that it was revealed that Netanyahu had held a phone conversation with his cabinet, from which the military brass was excluded. The cabinet had approved the invasion, and had also decided that such an invasion was grounds for postponing the elections at the very last minute.

Unity speeches all round

Haim Levinson of Ha’aretz newspaper estimated that a unity government including these three parties is the most likely scenario. Failing to form such a government, however, might force Israel to hold elections for the third time in a period of one year.

Gantz has previously said that he will enter a coalition with the Likud and with Beitenu Yizraeli, but not with Netanyahu himself, unless the charges against Netanyahu are dropped.

Members of the Likud party, however, vowed that Netanyahu will continue to lead the party despite the corruption charges. 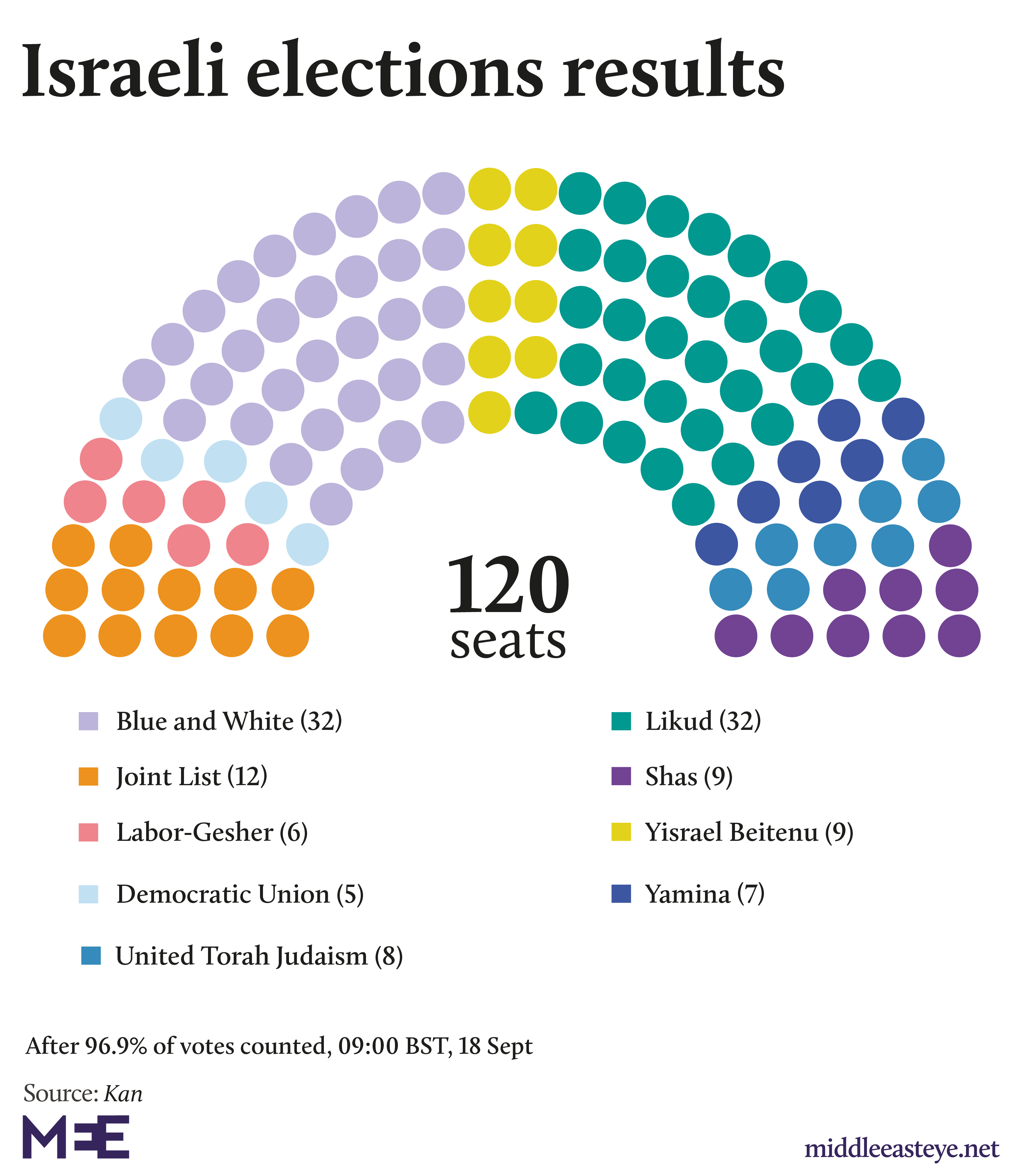 Israeli law stipulates that the chairman of the largest opposition party is considered the “head of the opposition” and enjoys certain privileges: regular security briefings from the prime minister, the right to speak after the prime minister in the Knesset and his own security detail.

As the Joint List is a joint Palestinian-Jewish party (comprised of four smaller parties), chaired by Ayman Odeh, a Palestinian and an Israeli citizen, Nahum Barnea of Yedioth Ahnorot wrote that it is likely that Odeh will become the first Palestinian head of the opposition head in Israel’s history.

Days before the elections, Odeh himself declared his intention to make history by being the first Palestinian to do so.

Israel Today journalist Gideon Alon warned that Odeh as opposition head would be a security threat to Israel because of his opposition to the Israeli occupation and his support to the rights of Palestinian refugees.

The Democratic Camp is a union between the left-Zionist Meretz party, the Labor Party's Stav Shafir and Ehud Barak, former Israeli prime minister who has formed his own party called Democratic Israel. According to preliminary election results, the alliance received five seats in the Knesset.

Barak is considered the most right-wing member of the newly formed party. As prime minister, he oversaw the deadly crackdown on a protest by Palestinian citizens of Israel in 2000, in which 13 civilians were killed, in addition to his lethal suppression of the Second Intifada that claimed the lives of thousands.

Within the Democratic Camp, Barak was placed 10th, which means that he will not be a Knesset member. On billboards, however, he was placed prominently as one of the three leaders of the party, alongside party chairman Nitzan Horowitz and Shafir.

The Democratic Camp scraped past the 3.25 percent threshold to enter the Knesset. After the elections, however, members of the party told Ha’aretz that they believe inviting Barak to join was a mistake.

Meron Rapoport wrote in Local Call that Barak took the Democratic Camp to the right, muted the calls within the party to oppose the occupation and drove away leftist voters.

Despite the criticism, Horowitz insisted that joining forces with Shafir and Barak was “the right move”.