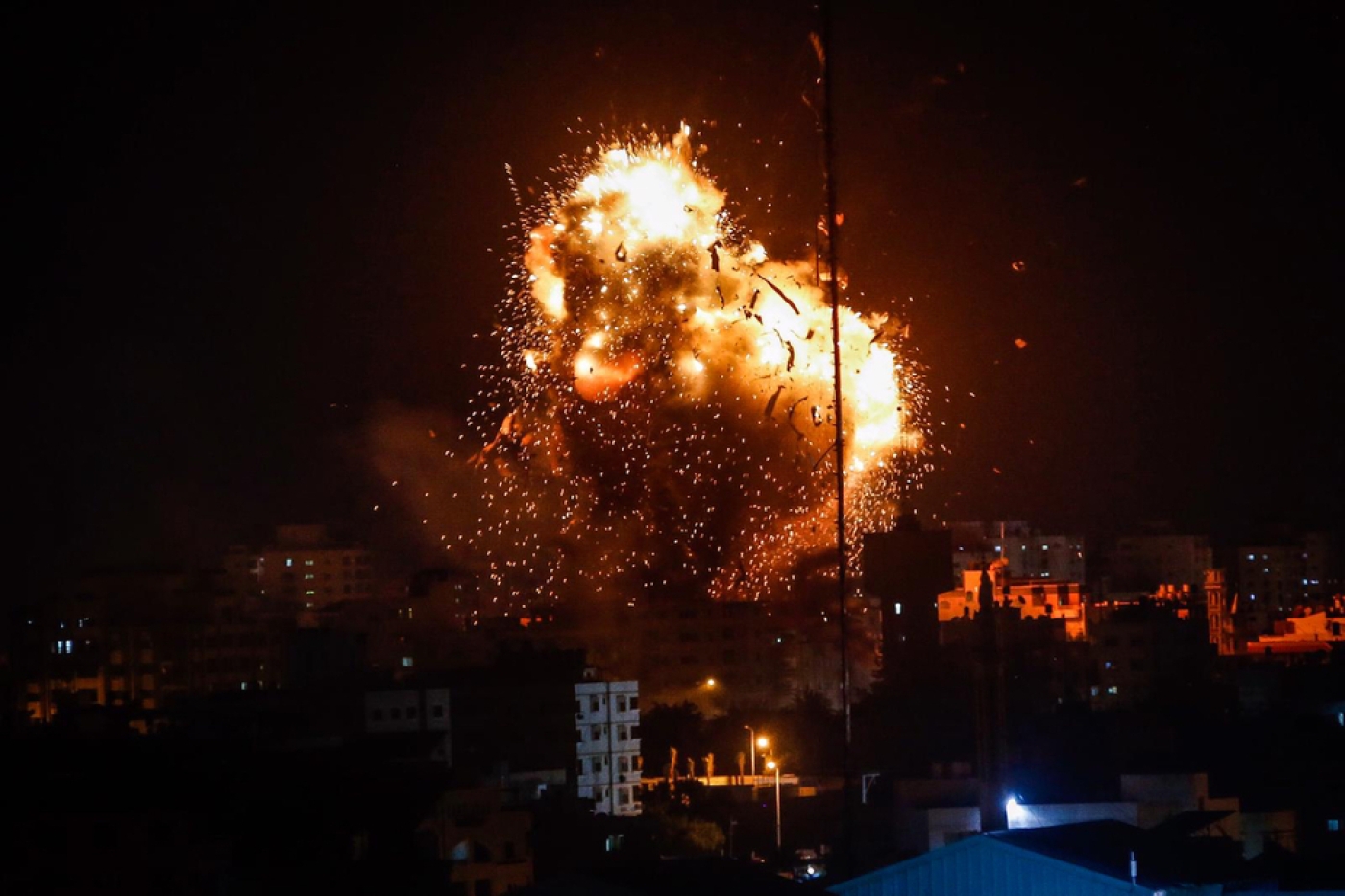 Palestinian officials have denounced Israeli bombings on the besieged Gaza Strip, including an air strike on the Al-Aqsa TV office in Gaza City (MEE/Mohammed al-Hajjar)
By
MEE staff

Four Palestinians were killed on Monday, and two more on Tuesday, as the Israeli army launched dozens of air strikes on the Gaza Strip and hundreds of rockets were fired from the besieged enclave.

One Palestinian was also reportedly killed after a rocket from Gaza hit his home in the Israeli city of Ashkelon, Haaretz reported. The report added that the rocket critically injured two women in the house.

The death of the 40-year old, a Palestinian originally from the West Bank city of Hebron, is the first confirmed death caused by the barrage of rocket fire from Gaza since Monday afternoon in a flare-up following a deadly Israeli special forces operation in the enclave.

The Israeli army struck at least 70 targets in Gaza, while 300 rockets were fired from the Palestinian territory toward Israel throughout Monday, Israeli media reported.

A further Israeli strike also killed a Palestinian on Tuesday, Gaza's health ministry said, raising the death toll in the enclave to five in less than 24 hours.

An eyewitness in Gaza told Middle East Eye the Israeli military on Monday bombed the building that houses the Hamas-linked Al-Aqsa television station in Gaza City.

Local and international media reported that the building was completely destroyed in the attack, while nearby structures were also damaged.

There was no immediate word of casualties, Reuters reported.

“Just like the way we dealt with the previous attacks, we are handling this one,” said Rami Abu Dayya, a cameraman who has worked for Al-Aqsa TV for the past 14 years and witnessed four separate Israeli attacks on the building in that time.

“Israel is trying to silence Palestinian media. However, a few minutes after the Al-Aqsa building was targeted, we were able to resume broadcasting [from another place],” he told MEE on Monday.

Dawoud Shihab, head of the media office for the Palestinian faction Islamic Jihad, said the destruction of the Al-Aqsa TV channel’s building and several other houses was “a serious, aggressive attack”.

“This will result in an escalation in retaliation from the (Palestinian) resistance,” Shihab said in a statement.

Meanwhile, the Israeli newspaper Haaretz reported that the Israeli military had struck 70 targets in the besieged Palestinian enclave by around 4pm ET Monday.

Israel's Iron Dome missile defence system intercepted around 60 of the 300 rockets that were launched from Gaza toward Israel, the newspaper said. Most of the rockets landed in open areas, the Israeli military said, as reported by Haaretz.

Israeli air strikes also hit houses belonging to Hamas activists in Rafah and Khan Younis, in southern Gaza, and struck a hotel in Gaza City used by the Hamas government to run its internal security agency.

Saeb Erekat, the secretary general of the Palestine Liberation Organization’s executive committee, said Israel was responsible for the attacks on Gaza, as well as the deteriorating situation in the territory.

“We reiterate our demand for international protection. We call upon the international community to do everything necessary to prevent a new massacre in Gaza," Erekat said.

Egypt also called on Israel to stop the violence in Gaza, Egyptian state TV quoted sources as saying, as reported by Reuters.

The sources said Egypt told Israel of the need to commit to a de-escalation process and also stepped up efforts with the Palestinians in that regard.

Abu Obeida, spokesman of the Hamas armed wing al-Qassam Brigades tweeted “what happened in Ashkelon is the responsibility of the enemy’s leadership."

Israel's security cabinet was set to convene on Tuesday morning in the wake of the violence.

Israeli emergency health service Magen David Adom (MDA), which evacuated the teenager to Soroka Medical Center in Beersheba, described the incident as an explosion. Six more Israelis were lightly injured in the southern city of Sderot, according to MDA.

Sirens blared in southern Israel throughout the afternoon and evening, and one went off near the Dead Sea, as well.

MDA said 50 Israelis were hospitalised at Barzilai Medical Center in Ashkelon throughout the day on Monday. Of that, 19 people were injured by the rockets, while 31 others were treated for shock, Israeli daily Ynet reported.

Staff at the Soroka Medical Center in Beersheba treated another three Israelis who were injured in the rocket fire on Monday, the newspaper said, and 44 others who were in shock.

Monday's violence comes in the wake of a deadly Israeli army ground and air raid into Gaza on Sunday evening, during which seven Palestinians - including a commander from Hamas's military wing, the al-Qassam Brigades - and one Israeli officer were killed.

The incident, marking a rare instance of Israeli ground troops being caught entering so far into the Gaza Strip, has sparked fears of an escalation of violence in the coastal Palestinian territory.

On Monday, US President Donald Trump's Middle East envoy, Jason Greenblatt, put his support squarely behind Israel, a staunch US ally, as he tweeted that the "rocket attacks and mortar fire on Israeli towns must be condemned by all".

"Israel is forced once again into military action to defend its citizens. We stand with Israel as it defends itself against these attacks," Greenblatt said.

The Israeli incursion and subsequent exchange of fire also took place despite Egyptian efforts to broker an agreement between Hamas and Israel amid ongoing mass protests in Gaza, which have put pressure on Israel to end its blockade of the Strip.

Recently, Israel agreed to allow Qatar to donate millions of dollars in aid to help pay the salaries of civil servants in Gaza and cover the costs of fuel to ease an electricity crisis.

Israeli Prime Minister Benjamin Netanyahu had earlier defended his decision to allow Qatar to transfer the cash to Gaza despite criticism from within his government, saying he wanted to avoid a war if it wasn't necessary.

Israel has killed more than 200 Palestinians and wounded some 20,000 since the beginning of the Great March of Return protests more than seven months ago.

Participants of the weekly marches have called for an end to the crippling 11-year siege of Gaza and for Palestinian refugees to be allowed to return to their ancestral homes.

With additional reporting from Mohammed Asad and Maha Hussaini in Gaza 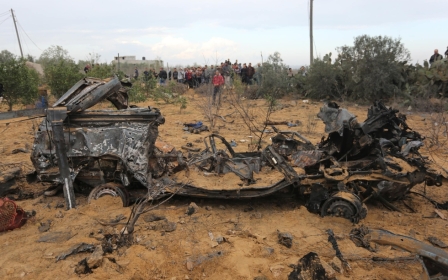 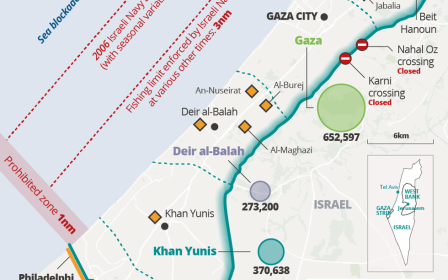 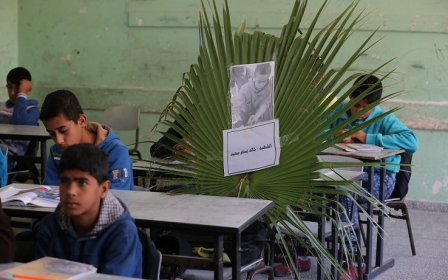