Gaza's 12 hours of freedom to breathe

During a 12-hour ceasefire in Gaza, displaced Palestinians rushed to stock up on food before Israeli bombings started again 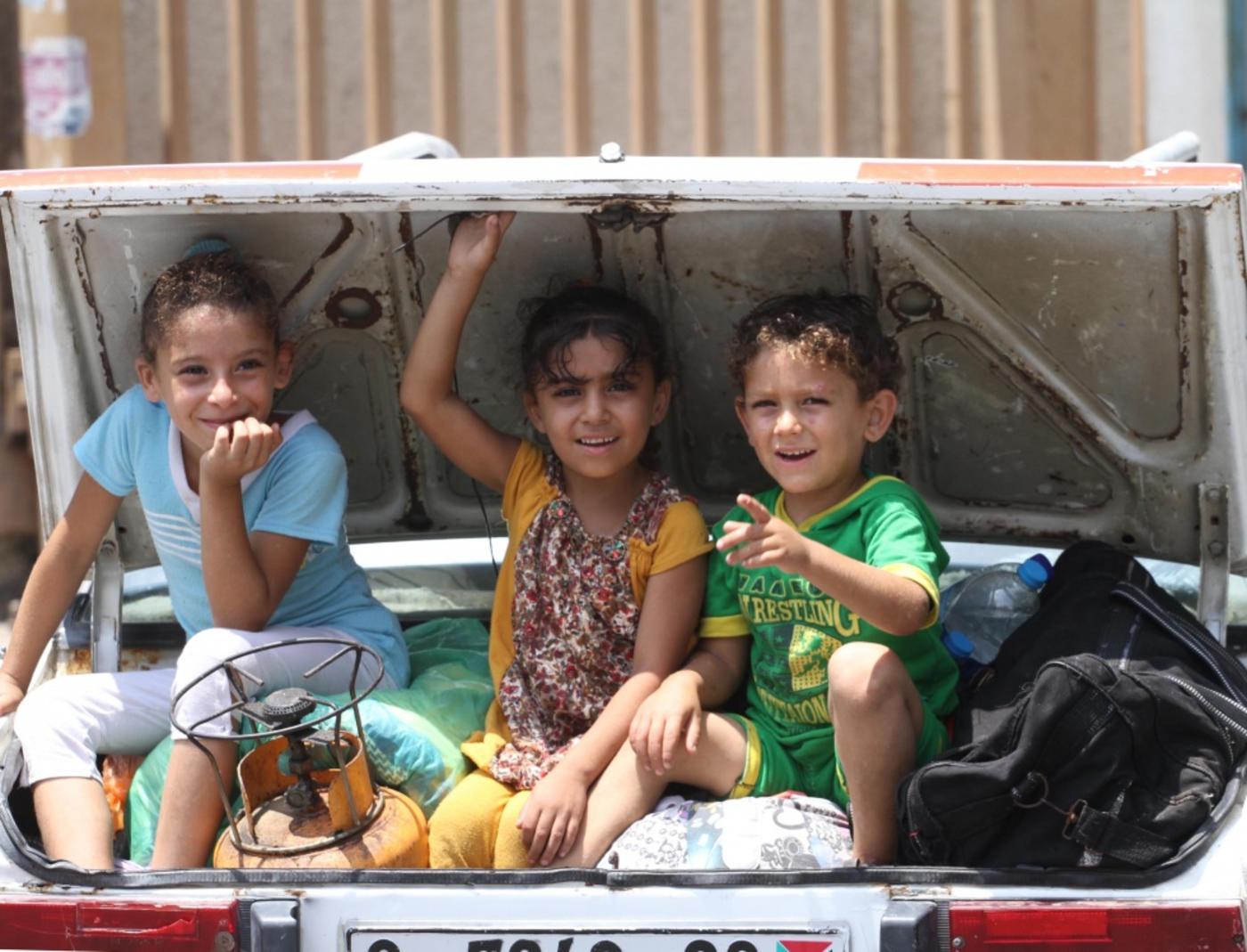 Tens of thousands of people flooded the streets of Gaza city on Saturday, in the midst of the 12 hour humanitarian ceasefire. Long lines formed in front of the banks and bakeries. The latter ones did not manage to meet the demand, and their workers packed the bread straight from the conveyor belt into customer’s bags. There was even a traffic jam, a rare view since Israeli invasion began, which forced people to avoid unnecessary excursions.

These were twelve hours of freedom to breathe, without worrying what can fall on you from the sky, twelve hours of feeling safe enough to come out and try to scavenge some of what’s left behind. All those displaced during the last 18 days, seeking refuge in UNRWA schools, rented apartment, floor in the churches, empty shops, or even street corners, rushed to see if their houses still stood and to recover most necessary items – cooking gas, kitchenware, mattresses, clothes for change. The destruction of border areas, like Shejaiya, Beit Hanoun, Abasan was massive, often the worst people have ever seen.

But not everyone could reach their homes. Since Tuesday, Khuza'a, a border village in the south-east of Gaza Strip had been shelled, bombed and eventually occupied by the Israeli military. There were people still trapped in Khuza'a, injured and dead, but Israeli tanks stood at the entrance to the village, not allowing anyone to enter.

In nearby village Abasan the smell of rotten flesh was so intense, it forced rescuers to put on face masks. In one of the corner houses, neighbours rushed journalists in to take pictures and show it to the world, they urged. On stretches, in the yard, there was a human leg, burned, consumed by larva. These were remains of 32-year-old Ibrahim Islaman Qabalan. When on Tuesday night people started to flee the village going west towards Khan Younis, he ran back to help an elderly woman, his neighbour who was not able to leave on her own. Ibrahim was killed by a tank shell, the woman was injured, but survived, and next day was taken to the hospital.

This quarter of Abasan was inhabited by Abu Teir family clan, who fled on Tuesday in the middle of the night when bombing intensified. They were right to do so, because most of their houses were damaged or destroyed that night. Red garden flowers, heavily hanging around the fences, seemed out of place with piles of cement or a bomb crater in the background, and the stench of decomposing human bodies mixed with that of dead animals, lying around in the summer heat for days, engulfed the quarter.

Bassam Abu Teir, whose house was also seriously damaged, told Middle East Eye that many people came back this morning, saw what happened to their homes, and left crying, as their walked back to nearby city of Khan Younis. Fares Abu Teir could not move, his back against the wall, squatting in narrow shade, he wept looking at what was left of his house.

Similar smell and scenes took place in Shajaiya, an eastern area of Gaza city, where thousands came back. Fadi Salman Jundiye left his house with 200 of his relatives on Sunday morning. They did not find a place to stay, UNRWA schools were full, and so they slept on the street. Next day, some managed to rent an apartment, others found shelter with relatives. Their house was damaged beyond repair. “We have never seen anything like that” - he told Middle East Eye, standing on another ruin of a house, looking around at the mass destruction surrounding him. Where he stood, there was a massive crater instead of a house of a family whose one member was apparently with the Palestinian resistance. Probably a one tone bomb was dropped here by an Israeli pilot, as Israeli military boasted about dropping one tone bombs. Just on Saturday night, they dropped a hundred of them. “We paid heavier price than others” - Fadi added. His family lost five people – he thinks, but is not sure, because their bodies have not been recovered yet.

The amount of rubbles to dig through was too much for the equipment of Palestinian rescuers. “The bulldozers we have are too small. Even if they worked for 12-hours non-stop, I am not sure we would be able to reach all those killed” - a fire fighter working at the scene, Musa Abu Hassanein told the Middle East Eye. He and other rescuers were trying to reach a body of 85-year-old man Hassan Abu Hind. He was killed together with his two grandsons, who stayed with him behind, because the old man was too sick to move and evacuate with their family on Sunday. His daughter stood on the doorstep of the nearby house, not able to hold back tears while receiving condolences. A group of people went through the rubble of the destroyed house searching for the family belongings, packing plastic bags and suitcases on a small tuk-tuk cart.

Abu Hassanein added that although mostly their job was to recover bodies at this stage, on Saturday the rescuers pulled out an entire family that survived the bombing, and was stuck under the rubbles - the Sukkar family. “Their neighbour heard them screaming this morning” - Abu Hassanein said.

The Palestinian Ministry of Health announced that more than 150 bodies were recovered from the rubbles of houses in different areas, raising the Palestinian death toll to more than a thousand. The work was supposed to continue during Sunday, but the ceasefire was cut short.

On Saturday evening, when muezzin called for the prayer, giving the signal to break the fast of the possibly last day of Ramadan, there was no sound of the rhythmical shelling from the Israeli navy, that customary accompanied the muezzin's call during last three weeks in the port area of Gaza city. There was a ceasefire in the Gaza Strip at the time. It was supposed to last 12 hours, till 8pm, but got extended with Israel's agreement till midnight, and then for another 24-hours. On Sunday, the unusual quiet was disrupted, the ceasefire finished earlier and the echoes of bombs falling around Gaza Strip returned. 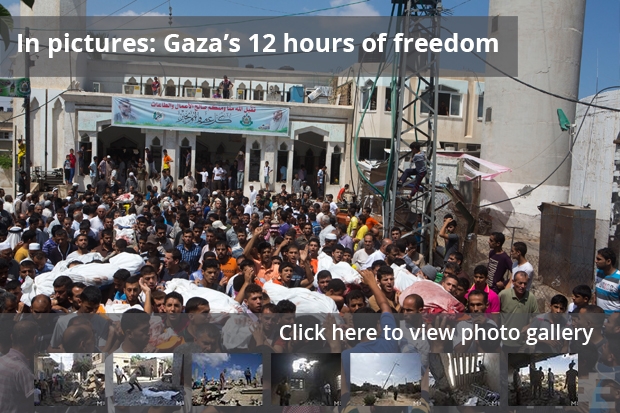 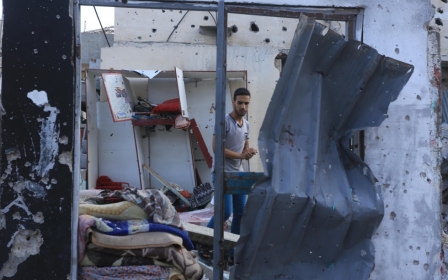 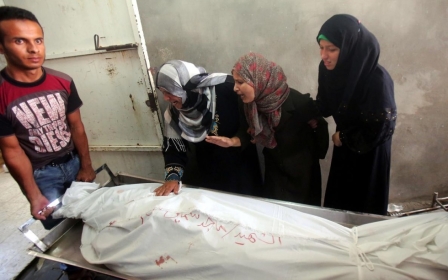 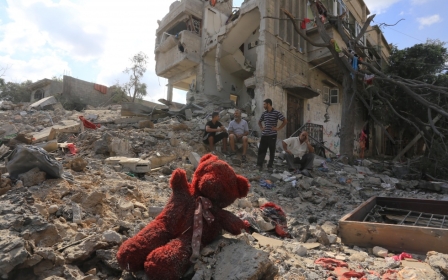