A Palestinian woman and child take part in a demonstration outside UNRWA headquarters to protest against the reduction of food aid for refugees on 9 October, 2013 in Gaza city (AFP)
By
Mohammed Omer

KHAN YOUNIS - It is a moment when a mother becomes frantic; not knowing what is causing the symptoms affecting her small baby. She runs everywhere but, in war time, there is nowhere to go except the UN school where she now lives.

Arafa Abu Jamie, 29, arrives with her eight-month-old baby, Remas Abu Jamie, not knowing what is wrong with her - she has a visible skin rash and what seems to be serious stomach cramps, vomiting and other gastric symptoms.

“She is vomiting, and her temperature is elevated – she’s never needed clinics before, except for routine vaccinations,” said her frightened mother, while waiting to see the emergency doctor at Khan Younis UNRWA school.

This UNRWA school is their home for the foreseeable future - with nowhere else to go. This is not, however, her main concern right now. Her baby’s health has worsened in the last 10 days, so Abu Jamie urgently seeks diagnosis and treatment for her baby’s symptoms.

Dr Yamen Alshaer, on the emergency team of UNRWA, finds it challenging to cope with so many different medical cases, especially as he has so few medications available to treat people, and he knows that scabies (the condition Abu Jamie’s baby is suffering from) is difficult to treat in an overcrowded school, where around 100 people sleep together in each classroom.

More than a hundred people are queuing outside a classroom to see Dr Alshaer, some with acute scabies and head lice, others with acute fever and gastroenteritis, diarrhoea and vomiting. Others come with severe upper respiratory-tract infections.

According to Alshaer, not one day passes without seeing scores of children with acute gastric problems - some are treatable, others are not. And he is seeing more children arriving with severe dehydration who must wait patiently to be seen in the makeshift facilities at the school.

“Such symptoms come through a combination of a lack of hygiene, overcrowding, poor nutrition and inadequate hydration among people in refugee shelters,” he said.

Abu Jamie is given enough medication for a day, but has to attend another clinic for follow-up—she knows hospitals in Khan Younis are overwhelmed with urgent cases from Israel’s attacks, and patients with secondary symptoms must take lower priority.

Abu Jamie is from east Khan Younis but can’t get there due to Israel’s military presence, so she must go to another UN clinic where the doctor says he’s seeing around 200 patients in a six-hour shift. The long waiting period to see (for less than two minutes) the doctor is time enough for illnesses to spread further.

The emergency is now beyond UN capacity in Gaza - with more than 450,000 civilians displaced, and needing shelter in UN and government schools, hospitals, public places, churches or with relatives. Everywhere is overcrowded, unhygienic with people malnourished and dehydrated, and a severe shortage of medical supplies.

However, the main problems affecting the people in shelters are scabies and head/body lice. UNRWA has handed out leaflets on how to avoid such conditions in normal circumstances.

But these are more abnormal circumstances for Gaza’s people than usual. And avoiding the spread of these conditions is not possible in these circumstances.

A woman arrives at the clinic concerned that there is nowhere to shower in the schools. She and her children haven’t showered for five weeks since Israel’s attacks began.

Hosni Abu Rida is waiting in line with serious scabies on his leg, which is spreading to the rest of his body - he fears that  his wife and eight children will contract the symptoms. He arrived from a nearby school - Sheikh Jaber - where he couldn’t get a doctor to check his family. This is extra humiliation for him, as his family lived comfortably in their villa for a long time. Now there is little left, his business is closed, and money is finished.

His 11-year-old child, Abdullah Abu Rida, has acute vomiting, he is being sick while waiting in line to be seen. The stench coming from the sewage in the school where they are sheltering is intolerable, but this is the only “safe” shelter for his family. These schools are not built to cater for such a huge capacity of sick and desperate people under attack, so the school-shelter system is collapsing fast.

“For a second week we are sleeping on the floor, and right next to us is a flooding sewage well,” he said.

Trucks have tried to pump the sewage four times in one day, he explained, but within an hour, the floor floods again. The family huddles in the only small space they can find.

He feels that the UN should urgently open new shelters for Gaza’s refugees, as space is running out and more people are forced to seek sanctuary on sewage-filled floors.

“In each classroom, there are 100 people sleeping - if each one carries a virus, it will soon spread to everyone,” said Dr Alshaer.

“I treat a child one day and the next day his sister, brother or neighbour comes to the room and picks up similar symptoms,” he said, while trying to reduce the temperature of Remas Abu Jamie which has reached 40 degrees.

There is a fear that if these conditions persist, then it would lay the population open to more deadly diseases, such as meningitis, dysentery and cholera.

Abu Rida has a big trauma in his life - both his son and brother were killed in eastern Khan Younis, by Israeli air strikes, last week. He fears these conditions will wipe out the survivors of his family too.

“We escaped almost certain death from Israeli gunfire, but now it seems instead of sending missiles to kill us, Israel wants us to kill each other with disease,” he said. 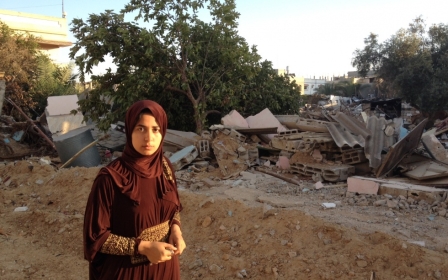