German police were on Sunday hunting a Syrian man suspected of plotting a militant bomb attack, placing his flatmate under arrest and raiding a contact's home, after finding explosives in the fugitive's apartment.

A police spokesman said the search has been extended "beyond the borders of Germany," with police in contact with their counterparts in other EU countries.

Security was stepped up at airports, train stations and other critical infrastructure as it was unclear whether the chief suspect, Jaber Albakr, 22, was still in possession of bomb-making material or weapons.

"We do not know where he is and what he's carrying with him," police said on Twitter, advising citizens to "be careful".

Albakr was carrying a backpack, the Sueddeutsche Zeitung (SZ) newspaper reported, when he narrowly escaped police commandos at dawn on Saturday from his apartment building in the eastern city of Chemnitz, 260 kilometres south of Berlin.

Police on Sunday questioned Albakr's Syrian flatmate, who was formally remanded in custody as a suspected co-conspirator of a "serious act of violence," after he was detained the previous day.

Police commandos also raided the Chemnitz home of another suspected contact of Albakr, blasting open the door as they stormed the premises, and took away a man for questioning, a police spokeswoman told AFP. She stressed that the person was not Albakr.

"Nobody was injured and no shots were fired. We've taken the man into custody and we are questioning him now," said Tom Berhardt, spokesman for the Saxony state criminal investigation office told Reuters.

Albakr was believed to have had internet contact with the Islamic State (IS) group, SZ reported.

According to security sources quoted, he had built "a virtual bomb-making lab" in the flat in a communist-era housing block and was thought to have planned an attack against either one of Berlin's two airports or a transport hub in his home state of Saxony.

Controversy is growing about how Albakr was able to narrowly escape police as they prepared to arrest him around 7am on Saturday.

Officers fired a warning shot when they saw the man, but he managed to get away, in what Spiegel labelled a possible "police failure".

Police spokesman Tom Bernhardt rejected the criticism, saying officers had to be cautious because "it was unclear whether the man was carrying explosives and a detonator" and they had to worry about the safety of other residents.

Police later found several hundred grams of an "explosive substance more dangerous than TNT" hidden in the flat and said that "even a small quantity ... could have caused enormous damage".

Local media reported that the material was TATP, the homemade explosive that was used by militants in the Paris and Brussels attacks.

A bomb disposal squad destroyed it in a controlled blast just outside the building.

Police rounded up three of Albakr's suspected associates on Saturday, including the flatmate who remains in custody. The other two have been released.

Meanwhile, federal prosecutors in the western city of Karlsruhe have taken over the case against Albakr.

Spiegel said Albakr had entered Germany last year on 18 February, and two weeks later filed a request for asylum, which was granted in June that year.

Police said they were following some 80 possible leads regarding the fugitive, who was shown in a wanted picture wearing a dark hooded sweatshirt.

In one false alarm on Sunday, police led a passenger who they thought resembled the suspect off a Eurowings jet about to take off from Berlin's Tegel airport.

Germany has been on edge since two IS-claimed attacks in July - an axe rampage on a train in Wuerzburg that injured five, and a suicide bombing in Ansbach in which 15 people were hurt.

The bloodshed has fuelled concerns over Germany's record influx of almost 900,000 refugees and migrants last year.

Heightening public fears, German police say they have foiled a number of attacks this year.

In late September, police arrested a 16-year-old Syrian refugee in Cologne on suspicion he was planning a bombing in the name of IS.

A week earlier, they detained three men with forged Syrian passports who were believed to be a possible IS "sleeper cell" with links to those behind the November Paris attacks.

German authorities have urged the public not to confuse migrants with "terrorists," but have acknowledged that more militants may have entered the country among the asylum seekers who arrived last year. 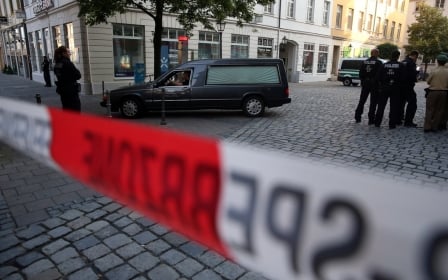