Global acts of solidarity with Gaza

Global expressions of unity with Gaza have taken place around the world, involving everyone from celebrities and sportsmen, to activists and teachers, all calling for solidarity with Gaza 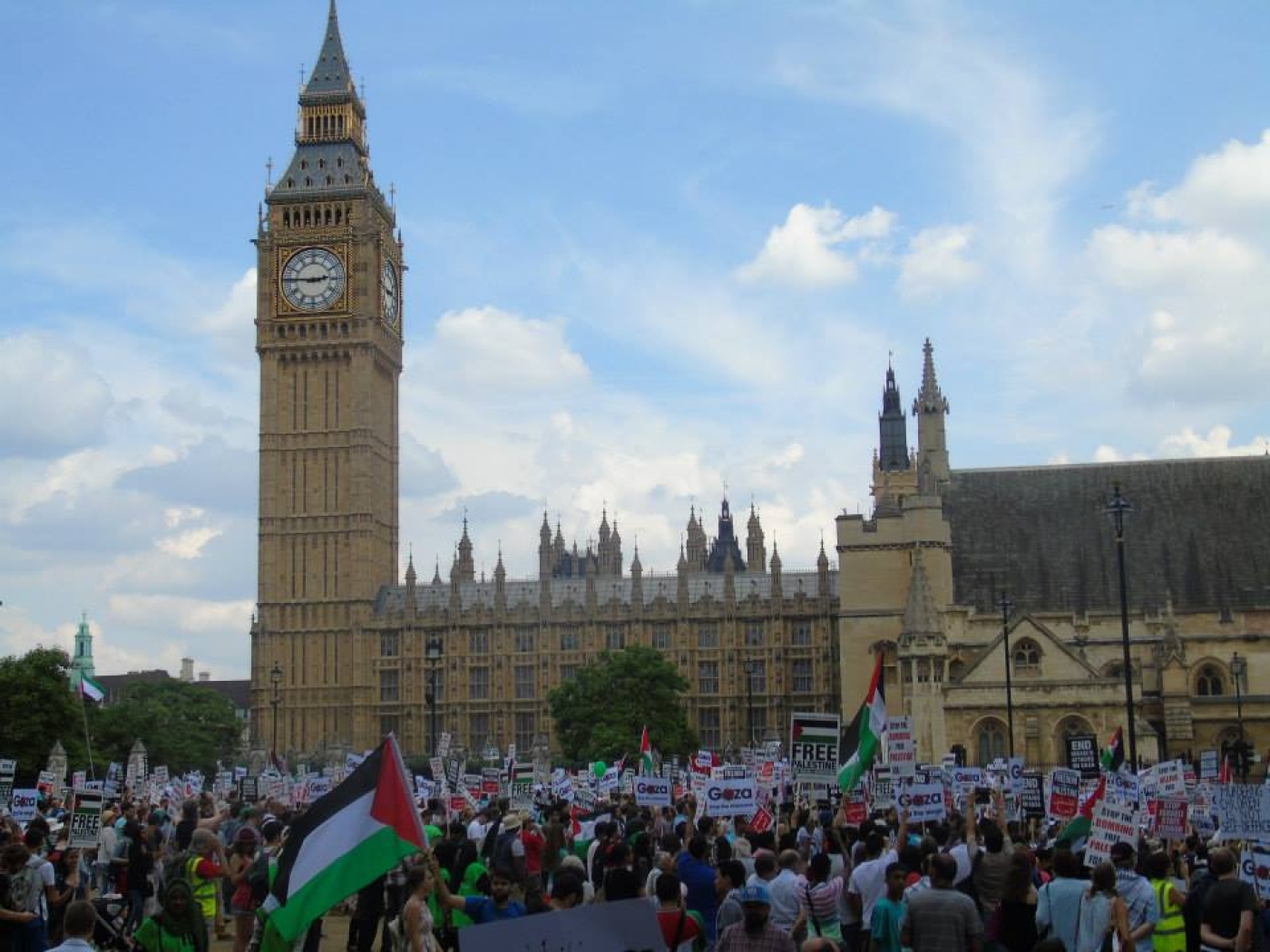 An estimated 100,000 people protested in London against the latest Israeli assault on Gaza (Hanan Chehata/MEE)
By
Hanan Chehata

An unprecedented level of support for the people of Gaza has been demonstrated on a massive scale around the globe since Israel began its latest offensive against the Gaza strip on 8 July 2014.

From protests numbering in the tens of thousands, to celebrity tweets of support; from “sit-ins” to “die-ins”, large swathes of the international community are making their feelings very clear, and the message is for Israel to permanently stop the bombardment of the Gaza strip in which over 1875 people (around 80% of who are estimated to be civilians) have already been killed and over 9805 have been injured, in less than a month.

Here is just a snapshot of some of the innovative ways people have been making their voices heard.

Malaysian cyclist Azizulhasni Awang competed in the Commonwealth Games wearing gloves saying "Save Gaza". Despite qualifying for the men's sprint quarter-final, he was threatened with disciplinary action for the move. He avoided being penalised after saying his message was a "humanitarian" rather than a "political" one. Following an investigation and a reprimand he has been allowed to continue racing on condition he does not wear those gloves again.

British cricketer Moeen Ali wore two wrist bands during his third Test match against India in Southampton. One said "Save Gaza" and the other said "Free Palestine". Following the match however, he was informed that he could face disciplinary action and the International Cricket Council (ICC) issued a statement saying: “The ICC equipment and clothing regulations do not permit the display of messages that relate to political, religious or racial activities or causes during an international match. Moeen Ali was told by the match referee that while he is free to express his views on such causes away from the cricket field, he is not permitted to wear the wristbands on the field of play and warned not to wear the bands again during an international match.”

A host of celebrities have taken to social media to express solidarity with Gaza, including Selena Gomez, Mark Ruffalo, and actress Mia Farrow:

I can find no moral justification for bombing schools, hospitals, ambulances and defenseless civilians who cannot even flee to safety

Some have stood by their messages of support while others have quickly retreated in the face of pressure and have either retracted their original post or felt it necessary to clarify their original messages, such as Rihanna.

While thousands of fans have expressed their support to these stars for their solidarity, others have been less than pleased, with One Direction singer Zayn Malik even receiving death threats for his tweet which simply said: Free Palestine.#FreePalestine.

Celebrity couple Penelope Cruz and Javier Bardem even signed an open letter condemning the actions of the Israeli government as "genocide", which was signed by dozens of other Spanish actors and directors.

MEE spoke to Jamaal Jay Richards, the Chairman of an association of Muslim bikers in the UK called the Deen Riders and he explained how they teamed up to protest in solidarity with Gaza:

"The atrocities in Gaza by the Israeli Government has sparked a worldwide protest. We understood the importance of this and decided to organise a protest ride. We were amazed at the response. We were joined by 103 bikers as we rode around Park Lane (Central London) revving our engines as we passed Speakers Corner (Hyde Park) to let our voices be heard. The sound of 103 engines bouncing off the limiters was nothing compared to the sound of the bombs falling on innocent families in Gaza. The crowds in Marble Arch raised their hands in solidarity. Our ride ended outside the Israeli Embassy where our letter demanding an end to the mindless killing was refused."
The bikers had come from all over the UK including Leicester, Birmingham, Luton, London and Cambridge.

There are photos on social media sites showing a train in Belgium that was supposedly painted down its entire length in the colours of the Palestinian flag. This has not been independently verified but pictures continue to circulate.

International political support has also been substantial. From the news of Spain temporarily suspending their supply of weapons to Israel, to Bolivia declaring Israel to be a "terrorist state", to the resignation of UK Baroness Warsi who tweeted news of her resignation when she wrote:

With deep regret I have this morning written to the Prime Minister & tendered my resignation. I can no longer support Govt policy on #Gaza

The protests have been phenomenal too. From New York and Washington, to Hong Kong and Rotterdam. Most major cities the world, and some not so major ones too, have seen their streets lined with thousands of protesters in the last few weeks, with more demonstrations and "days of rage" planned for the weeks ahead.

There have been protests, sit-ins, lie-ins and die-ins outside the White house, outside Downing street and outside Israeli embassies around the world.

The Palestine Solidarity Campaign (PSC) in London estimate that approximately 100,000 people took part in the demonstration on 19 July, and about 60,000 at the 26 July demo, with more expected to attend the next ones planned for the coming weeks.

Sarah Colborne, the Director of PSC told MEE that: “Week after week, people have come out in their tens of thousands on the streets of London to show their support for Gaza and for all Palestinians. And not just in London, but around the country local PSC branches have organised protests and vigils demanding an end to Israel’s massacre in Gaza. The support for the Palestinian cause is now mainstream. Speakers at our protests have included rock stars and children’s poets, as well as MPs and peers."

"People are no longer afraid to say they support the Palestinians. This should send a clear message to Israel and its allies, including our own government, that the people of the world have had enough of Israel’s occupation of Palestinian land and the oppression of the Palestinian people. The siege on Gaza must end now, the occupation must end now, and there must be justice and self-determination for the Palestinians. And until such time as Israel is able to abide by international law, our government must lead the way with sanctions and an arms embargo. This is the message from our protests, and we won’t stop campaigning until it is heeded.”

In Yemen, around 100,000 people are estimated to have protested for Gaza:

In Turkey, the protests were so intense that the embassy actually sent the families of diplomats back to Israel after hundreds of protesters threw stones at the house of the diplomat's residence and tried to break into the consulate, demanding the ambassador be expelled.

In France, despite a ban on pro-Gaza protests in Paris, protesters stil flooded the streets to show their solidarity.

Attention has not just centred around embassies and political institutions, but businesses and companies seen to be supporting the Israeli occupation of Palestinian land, that are engaged in settlement activity or in some way complicit in the war against Gaza are being targeted too.

Campaigners from a group called London Palestine Action, chained the doors shut and occupied the roof of an arms factory in Shenstone in Staffordshire. The group said they chose that factory to demonstrate against because it is "owned by an Israeli military company and manufactures engines for drones that have been exported to Israel."

According to a press release sent to MEE: "The occupation comes the day after the UK government pledged to investigate whether any of £8bn of arms exported to Israel in the last 5 years are being used in Israel’s ongoing attacks on Palestinians in Gaza."

One of the occupiers, Sara Cooper, 26, a teacher from south London said:

“By allowing this factory to export engines for killer drones to Israel, the UK government is providing direct support and approval to Israel's massacres.”

“The UK government has blood on its hands and must end its support for Israel’s crimes against humanity by ending all forms of military cooperation with Israel, starting by closing this factory. We demand the UK government stop arming Israel.”

Even non political companies, like Loreal Israel, are finding themselves at the heart of calls for boycott. When an Israeli Facebook page posted a picture of female Israeli soldiers receiving care packages from Loreal, it caused outrage among many with people posting comments like "you'll need more than some beauty products to wash the stains of blood from your hands..."

There are even more acts of solidarity planned for the months ahead, including the launch of Freedom Flotilla II.

There have been many attempts to break the siege on Gaza by sea by groups like the Free Gaza Movement. The last major attempt was the May 2010 Freedom Flotilla, headed by Turkish passenger ship, the Mavi Marmara. While en route to Gaza, the ship was forcibly boarded by Israeli commandos while it was still in international water and 9 of the solidarity activists on board were killed immediately with many others injured. The people on board were arrested, detained against their will in Israel and then deported.

This proposed second Freedom Flotilla will be partly in commemoration of the victims of the first, and partly just the latest attempt, in a long line of attempts, to break the siege on Gaza.

These are just some of the various innovative ways people are expressing their solidarity with the people of Gaza. While various ceasefire initiatives may offer a temporary lull in the recently relentless shelling of the Gaza strip, many activists insist that they will continue their actions of solidarity with Gaza and condemnation of the actions of the Israeli government until the siege of Gaza is lifted, permanently. Gaza Under Attack
In Pictures: Pro-Gaza protest in Tel Aviv