Review was reportedly to be released this week, but is held back after lawyers representing group apparently delay legal action The UK government has again delayed its release of a review into the Muslim Brotherhood on Monday after lawyers representing the group apparently said that they would postpone taking legal action against the government.

The action would have involved a legal precedent that parties involved can review investigations into their activities ahead of their public release.

Reports emerged last week that the review would be released this week after several delays, but on Monday, the UK prime minister said it will published at the same time as the government’s new counter-extremism strategy.

The report is thought to have been completed in June or July last year - and has been reviewed by the government and Number 10 - but has yet to be shared with the Muslim Brotherhood and the public and has been subject to repeated delays.

Last April, Cameron ordered an investigation into the movement and came under a hail of criticism that he was acting under pressure from Saudi when it was revealed that he had appointed UK Ambassador to Saudi Arabia Sir John Jenkins to lead the review.

Jenkin’s review is thought to clear the organisation of being labelled as a terrorist organisation with Whitehall officials telling the FT that the investigation has found little evidence that its members are involved in terrorist activities.

When asked why the government would pair the release of the two given that the Jenkin’s review apparently clears the group of being labelled as a terrorist organisation, the Downing Street spokesperson said it is possible to “be an extremist group and not necessarily a terrorist group.”

“If you think in terms of what the Muslim Brotherhood have been accused of doing so to speak – not in the review, but in the past – of maybe fostering extremist views then you could see maybe how the counter-extremism strategy would be coherent in terms of how the two would overlap,” the spokesperson added.

Tayyab Ali, partner at ITN Solicitors in London and a member of the Muslim Brotherhood's legal team, told MEE on Monday after Cameron announced the report delay that his client is "an important advocate for democracy in the Middle East."

"Conflating the MB Review with the government’s counter-extremism strategy brings into question the motivations behind the review," Ali said.

"To do this to an non-violent Islamic organisation, which condemns acts of terrorism, at a time when violent extremists are taking so much ground in the region brings into question the government’s judgement and understanding of the complex and dangerous situation unfolding in the Middle East," he added.

Last Thursday, leaders of the organisation told Newsnight that they will not allow their reputation to be defamed.

Yehia Hamed, Egypt's investment minister during Mohamed Morsi's presidency and one of Morsi's close aides, said If the group's reputation - which Hamed described as being "100 percent against violence, 100 percent against terrorism" and as "the counter of terrorism" - is defamed, the group will "take any parliamentary process into this, even go to court, to defend our reputation."

Sources tell MEE that the legal action against the government would involve a procedure called Maxwellisation - named after a case involving media mogul Robert Maxwell -  whereby individuals and organisation who will be criticised in an official report are sent report details ahead of time and are allowed to respond ahead of a report's publication.

When Cameron announced the review last April, he said the purpose was to “inform government policy towards the Muslim Brotherhood.”

Yet, as Middle East Eye reported, Cameron had invited leaders of the group to Chequers for lunch less than a year before when former president Mohamed Morsi was still in power.

Over two hours during the visit last May, the Brotherhood’s international spokesman, Gehad El-Hadad, answered Cameron’s questions about the Brotherhood’s vision and asked what Britain could do to support it, according to others who were present.

The lunch was the start of a series of meetings with Downing Street officials and ministers held with Brotherhood leaders. El-Hadad’s father Dr Essam El-Hadad, Morsi’s foreign affairs advisor, met with William Hague and Alastair Burt at the Foreign Office in June.

Both Essam and Gehad El-Haddad, who also once worked for the Clinton Climate Change Initiative, have been in prison in Egypt since 2013. 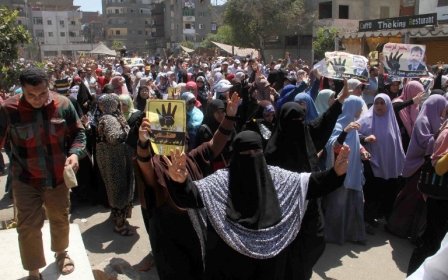