At his confirmation hearing, Trump's secretary of state pick Rex Tillerson was asked questions on Russian sanctions and war in Aleppo 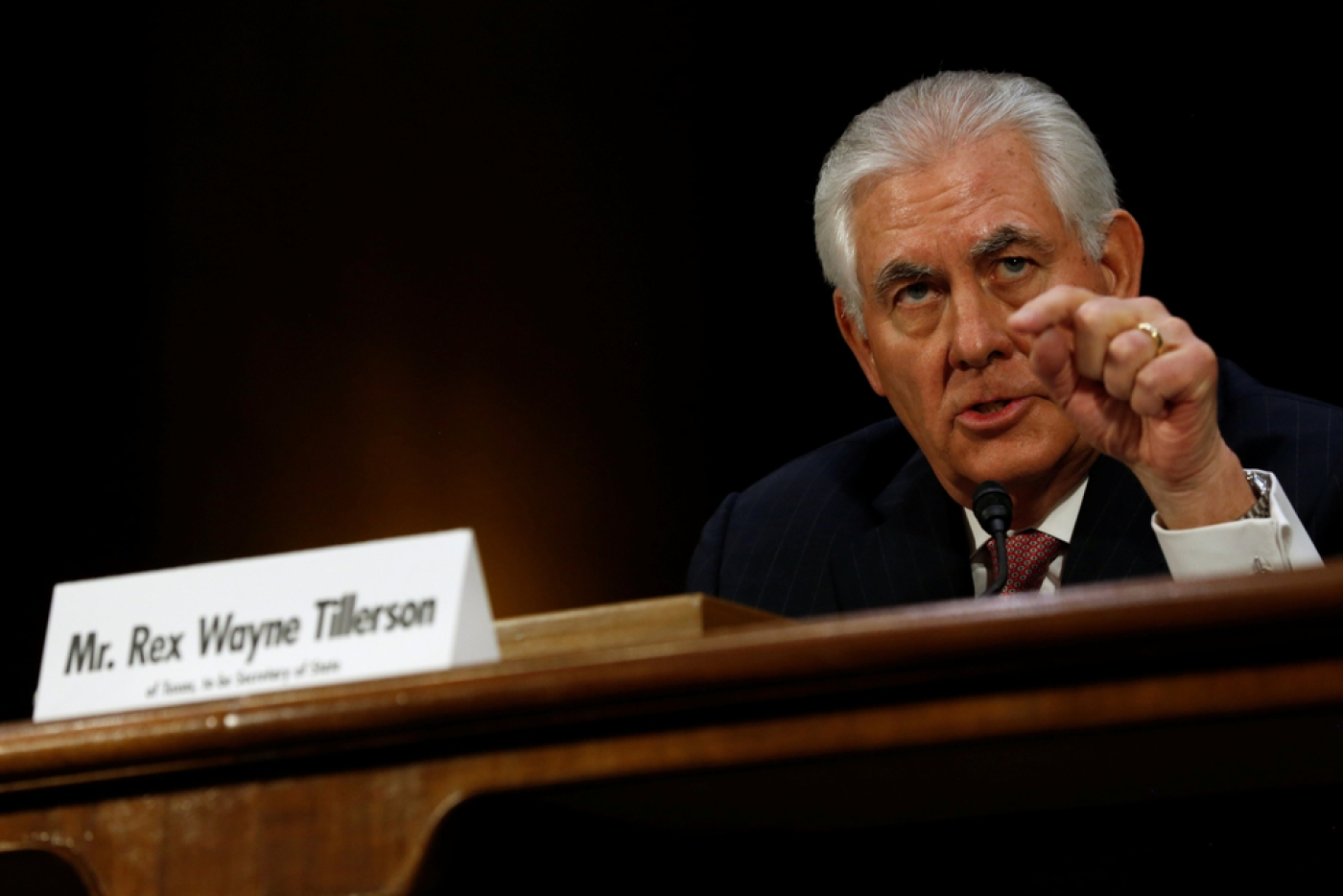 Tillerson was familiar and popular figure in Moscow, and was awarded an Order of Friendship medal by Putin in 2012 (Reuters)
By
MEE and agencies

Accused of being too cosy with the Kremlin, US President-elect Donald Trump's nominee for secretary of state took a firm line against Russia on Wednesday, warning it poses a danger internationally and will likely never be a US friend.

But while Rex Tillerson signalled his intention to be "clear-eyed" about Moscow, he declined to say whether he would back economic sanctions against Russia, and acknowledged he has not discussed with Trump the incoming administration's position on Washington's former Cold War foe.

The former ExxonMobil chief executive's remarks at his confirmation hearing before the Senate Foreign Relations Committee came against a backdrop of controversy over alleged Russian interference in the US presidential election.

"While Russia seeks respect and relevance on the global stage, its recent activities have disregarded American interests," Tillerson said, without offering specifics.

"Russia today poses a danger, but it is not unpredictable in advancing its own interests."

Tillerson, whose entire professional career has been in the energy industry, has faced criticism for his business relations with Russian President Vladimir Putin and other authoritarian leaders. 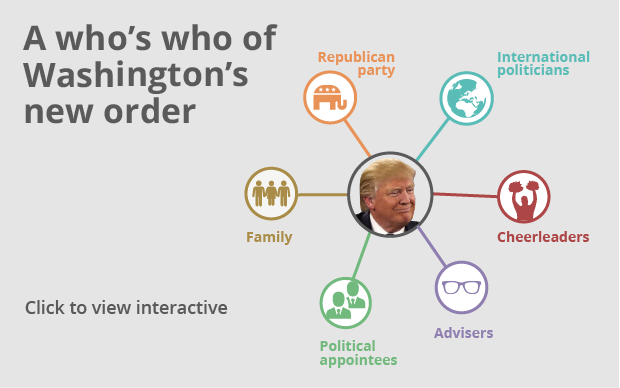 Until he stepped down from ExxonMobil on New Year's Eve, Tillerson was also director of Exxon Neftegas, an affiliate that operates the Sakhalin-1 field in Russia's Far East.

The US parent firm was chasing greater investments in Russia, including Arctic fields, and Tillerson, a familiar and popular figure in Moscow, was awarded an Order of Friendship medal by Putin in 2012.

But the 64-year-old stressed that as Washington's top diplomat, he would conduct a more robust US foreign policy than during Barack Obama's presidency.

To achieve 21st-century stability, "American leadership must not only be renewed, it must be asserted," he said.

Trump says he would like closer US ties with Russia and Putin, but Tillerson appeared keen to assure lawmakers that he will hold a tough line on Moscow.

"Our NATO allies are right to be alarmed at a resurgent Russia," he said.

Republican Senator Marco Rubio asked Tillerson if he believed Putin is a "war criminal" for the Russian military's attacks on Aleppo, Syria.

"I would not use that term," a steely Tillerson said.

Rubio then outlined a list grievances of Russian attacks in Aleppo, including strikes on hospitals, markets and schools.

“Those are very, very serious charges to make, and I want to have much more information,” Tillerson responded.

Rubio replied that the information is public and “the videos and pictures are there”.

“It should not be hard to say that Vladimir Putin’s military has conducted war crimes in Aleppo,” he added.

When Tillerson did not respond, Rubio told the hearing: “I find it discouraging, your inability to cite that,” Rubio said.

Near the end of exchange, Tillerson said he would get a better understanding of the situation once he reads classified material on the subject.

“None of this is classified, Mr Tillerson,” said Rubio. “People are dead.”

Tillerson also said on Wednesday he would recommend a "full review" of the nuclear deal with Iran, but he did not call for an outright rejection of the 2015 accord.

In his opening testimony, Tillerson warned that the United States must be honest about “radical Islam”. He said the US should prioritise defeating the Islamic State (IS) to address other “radical” groups, including al-Qaeda and the Muslim Brotherhood.

The Muslim Brotherhood, a political Islamist organisation that says it does not engage in militant activity, is not designated as a terrorist organisation by the US State Department.

However, Trump’s foreign policy adviser, Walid Phares, has said that the incoming president plans to blacklist the group.

"Eliminating ISIS would be the first step in disrupting the capabilities of other groups and individuals committed to striking our homeland and our allies," Tillerson said on Wednesday. "The demise of ISIS would also allow us to increase our attention on other agents of radical Islam like al-Qaeda, the Muslim Brotherhood, and certain elements within Iran."

He also said that the war cannot be won on the battlefield alone, vowing to support Muslims around the world "who reject radical Islam in all its forms".

He said Americans are right to be concerned about “radical Islam”.

Tillerson added that groups like IS and al-Qaeda are enabled by nations, organisations and individuals. He pledged to go after these actors, without naming them.

"Recent news accounts indicate Russia may well have information about Mr Trump and they could use that to compromise our presidency," Cardin said, alluding to a leaked dossier of unsubstantiated reports that claim Russia gathered compromising personal and professional details about Trump.

"It cannot be business as usual," Cardin insisted.

Some Republicans have also raised concerns about Tillerson's candidacy.

If just three Republicans jump ship, Tillerson's nomination could be blocked, despite support from party heavyweights.

While his Russia ties have faced scrutiny, number two Senate Republican John Cornyn said Tillerson "understands how to separate friendships and business. He knows who he works for".

Tillerson was a staunch opponent of US and international sanctions against Russia for its interventions in the Ukraine crisis, where it annexed the Crimea region.

On Wednesday, under questioning from Democratic Senator Robert Menendez, Tillerson would not say whether he would support fresh sanctions on Moscow, suggesting that "by design" they could harm American business.

Washington and Moscow could either be adversaries or partners, he said, but probably would never rise to a warm friendship because of their difference in values.

"We're not likely to ever be friends," Tillerson said. 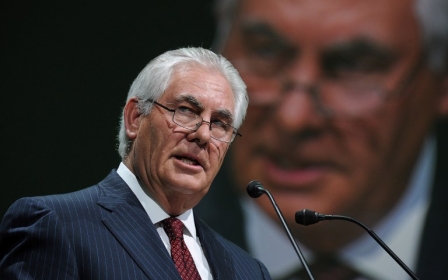 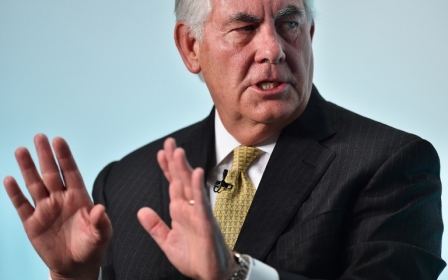 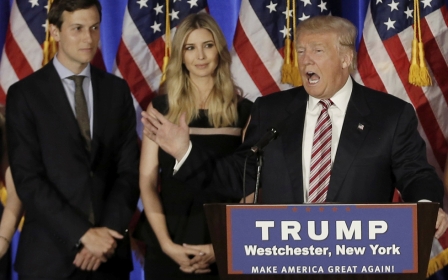