Boris Johnson has urged Qatar to crack down on supporting extremists. He walks a fine line with a country that has ploughed billions into the UK The UK foreign secretary, Boris Johnson has called for Qatar to do more to clamp down on extremism, in what is being seen as the UK's first major intervention in the Gulf diplomatic crisis.

The call came alongside a plea for Saudi Arabia and its Gulf allies to ease their blockade on Qatar, as Johnson sought to strike a finely balanced note, urging all sides to step back from escalation and confrontation.

Johnson was speaking after meeting Qatar's foreign minister, Sheikh Mohammed bin Abdulrahman al-Thani, on Monday. The UK foreign secretary, said: "Qatar is a partner of the UK in the fight against terrorism, but they urgently need to do more to address support for extremist groups, building on the steps they have already taken to tackling funding to those groups."

The statement might have shocked the Qatari minister. The meeting took place in London, a city awash with Qatari investments that symbolise the two countries' extremely close ties.

Qatar, which by capita is the richest nation on earth, has invested more than £40bn in the UK, much of it in London and much of it during Johnson's eight year tenure as mayor, which saw him travel to the Gulf state to drum up business and even despatch London's fire brigade to the country to help prepare local staff for the 2022 World Cup.

The country now owns, via its Qatar Investment Authority (QIA), more than three times as much property in the British capital than the Queen and recently pledged a further £5bn investment package to boost what has been called its "Monopoly board of trophy assets".

These investments in the UK, from a nation that "needs to do more to address support for extremists groups", include stakes in the Shard, Harrods, Canary Wharf and dozens of high-end properties.

Claridges, The Berkeley and The Connaught

The billionaire Barclay brothers sold these three high-end London hotels to the QIA in April 2015 for a reported £1.6bn.

The Canary Wharf Complex, including the famous One Canada Square tower, was purchased by the QIA in January 2015 for more than £2.5bn. The complex also includes the HSBC Tower, the joint fourth largest building in the UK. Qatar doesn't own HSBC, but it does have a large stake in major rival Barclays.

The premier racing fixture of the summer has nothing so vulgar as a sponsor, but a Qatari holding company controlled by the state's royal family became an "official partner" for the Queen's favourite event in 2014. The company paid an undisclosed fee for the privilege.

Mohammed al-Fayed, the larger-than-life former owner of London's uber-luxury department store, sold the Mayfair property to the QIA in 2010 for a reported £1.5bn.

Qatar's sovereign wealth fund also has major stakes in supermarket Sainsbury's, the London Stock Exchange Barclays, Heathrow Airport and British Airways owner IAG. Outside the UK, it also has a significant stake in the VW Group.

Qatar's QIA bought a 20 per cent stake in Camden Market in 2008, Boris Johnson's first year as Mayor of London, for a reported £80m. That figure has since been disputed.

A branch of the QIA bought the Olympic Village for £557m after the 2012 London Olympics. It is building 2,800 homes on the site, and is likely to make a total profit of around £1bn, according to media reports.

A subsidiary of QIA bought the vast former military site in 2007 from the Ministry of Defence for more than £900m, with plans to build 448 new homes in the west of the British capital. Plans have proved controversial with locals though and there has been significant opposition.

Up to half of what has been described as the "world's most expensive apartment block" is owned by Hamad bin Jassim bin Jaber Al Thani, the former Qatari prime minister. He is not thought to be a regular visitor though, and many of the vast flats within the property remain empty most of the year.

The QIA used the American embassy's move to Battersea as an opportunity to snap up the 600-room building in 2009. It was central to the US-UK special relationship throughout the Second World War and saw massive protest during the Vietnam War. The Grade II-listed buiding on Grosvenor Square is set to become a nine-floor, 137-room hotel. 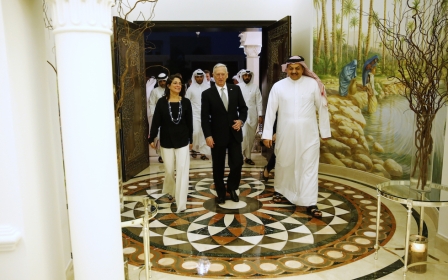