With concerns over privacy on WhatsApp, rivals Signal and Telegram are gaining significant numbers of new users in Gulf states, new data shows 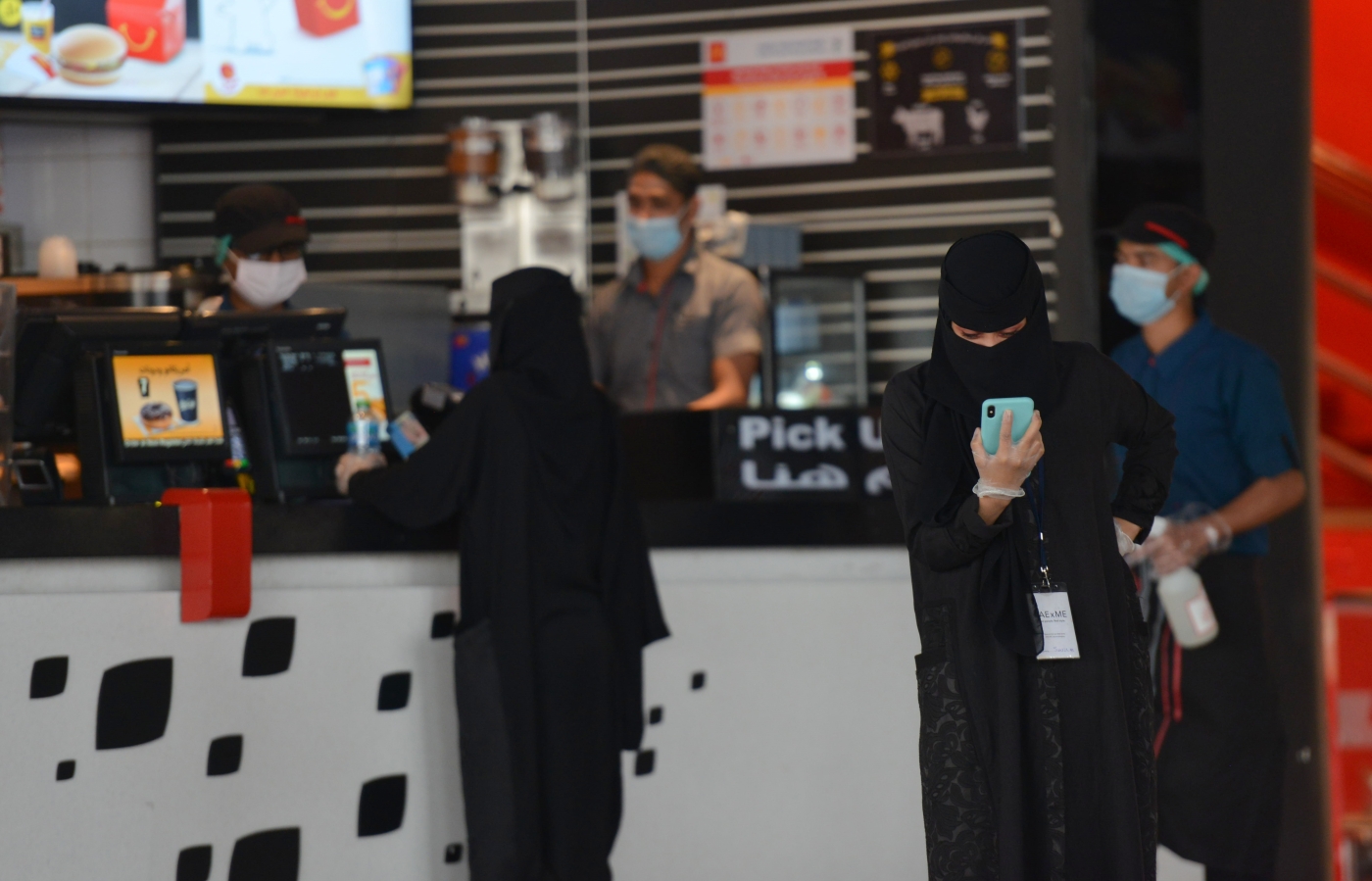 A woman checks her phone in a Riyadh mall. Will WhatsApp's data-sharing deal with Facebook damage its reputation in the Gulf countries?
By
AP Muhammed Afsal
in
Doha

Residents of Gulf Arab states are recoiling at WhatsApp and dropping it like a stone, after the popular messaging service issued its users an "ultimatum" which would see them agree to share certain data with parent company Facebook.

WhatsApp's two billion users began getting a pop-up notification on 4 January urging them to agree to changes covering what data can be shared between the app and the rest of Facebook. Users were also told that to continue using the app, they needed to agree to the changes by 8 February.

Between this ultimatum and, on 15 January, the extension of the deadline until 15 May, WhatsApp rivals Signal and Telegram gained significant numbers of users in at least three Gulf states - the United Arab Emirates, Saudi Arabia and Kuwait, according to figures given to Middle East Eye by market intelligence firm Apptopia.

'WhatsApp will still serve its purpose - example: connecting with grandma, who is not going to download a new app'

A cursory look by MEE of the UAE and Kuwait figures shows a massive increase in the number of downloads in favour of Signal and, to a certain extent, Telegram after 4 January. MEE compared the figures from the period 1 October 2020-3 January 2021 with those from 4-12 January.

While WhatsApp still dominates daily downloads, the combined daily average of the rival apps stood at 10,702.

In Saudi Arabia, WhatsApp downloads have largely remained the same. However, rival apps were gaining in popularity and had surpassed WhatsApp in the immediate few days before this story was written.

According to Lenahan, "WhatsApp downloads haven't declined significantly. This is because the migration to Signal and Telegram is going to look stronger than the migration away from WhatsApp anyway. WhatsApp will still serve its purpose - example: connecting with grandma, who is not going to download a new app."

Lenahan could not say for sure why people are switching over to Telegram and Signal. However, she said, "Our understanding is that people seem to be more concerned with privacy and censorship than ever before. This is largely due to the growing focus on 'Big Tech' and rising tension in certain political climates around the world."

Her opinion mirrors the responses to a questionnaire MEE sent to 138 random contacts (119 on WhatsApp, 19 on Signal) across the six Gulf countries. The majority of 38 people who responded said they will continue to use WhatsApp.

Only two said they had uninstalled WhatsApp and migrated to Signal. (While Apptopia has figures of downloads, it doesn't track the uninstalls.)

In recent years, WhatsApp has become an essential tool for many businesses. The smaller ones who can't afford to build an app use WhatsApp Business for order-taking, leads, offer announcements and cold calls. Even some major companies, including Qatar's telecom leader Ooredoo, use the service for customer-care communications.

A fall in the number of WhatsApp downloads, of course, is not an indicator of the app's decreasing popularity, because even without new installs, WhatsApp might be the dominant app in a larger number of phones. But the increase in downloads of Signal and Telegram indicates their popularity, and growing concerns around privacy and data security.

"I have been using Telegram for years," said Abis Bishara, an administrative executive secretary at a firm in Riyadh. "Three years ago, my boss told me to install Signal for office communications. But I don't use these apps in the same frequency I do WhatsApp.

"No one in my private circle has deleted WhatsApp," Bishara added, "but many have downloaded Signal. In discussions in the family-friends groups, WhatsApp has no support. People distrust Facebook."

However, many were sceptical about concerns over privacy. Rayees Ali, a real estate manager working with Qatar's Falih Nasser Falih Establishment, asked if anyone would care had WhatsApp enforced the data-sharing rule in the first instance.

"No one reads terms and conditions, they just tap 'OK' or 'Agree' when they install a new app," he said. "What privacy are you talking about? Who knows if Signal follows WhatsApp in pursuit of money? I hear that one of the Signal founders was also there to co-found WhatsApp."

The co-founder in question is Brian Acton, who built WhatsApp and sold the app to Facebook for $22bn. Though once associated with Facebook, he has publicly urged users to get off the network over privacy concerns. In an interview last week, Acton suggested people use Signal for conversations with their family and close friends, and WhatsApp for other chats.

"I have no desire to do all the things that WhatsApp does. My desire is to give people a choice," he told TechCrunch.

'Many of these 'privacy people' are pretentious, who want to show they know everything. Who needs privacy? Maybe lovers and youngsters do'

Pokker Kakkad, who runs a cloth shop in Doha, said he has downloaded Signal and had started using it to chat with friends. "But, see… many of these 'privacy people' are pretentious, who want to show that they know everything. Who needs privacy? Maybe lovers and youngsters do."

Another respondent to the MEE questionnaire said: "WhatsApp will definitely change the policy and [I'm] waiting till 8 February, the last date, to tap 'Agree.'"

WhatsApp did extend the date, but not the "policy".

Many others doubt whether the change is necessary. "I already use Telegram," said Jaleel Omassery, a printing technician in Dubai. "About 100-150 in my contact list are already using Telegram, but only 25 are using Signal. WhatsApp is friendly. Some private firms have asked staff to move to Signal."

Shafeeq Kadalundi, a newspaper distributor in Qatar, said there's no point in remaining on WhatsApp and then adding Signal. "If everyone moves, I'll follow."

Syed Ashraf Thangal, a Riyadh-based businessman, agreed: "We can leave WhatsApp only when everyone leaves. There's no 'Signal' buzz in Saudi."

Rafeek Nellur, who runs a textile business in Bahrain, said he downloaded Signal on an experimental basis. "And I have made family, community, charity groups on the platform. If WhatsApp changes their policies, I'll remain."

Two respondents said they trust the government to take care of their privacy. One man, who runs a grocery in the UAE, said one customer, a police captain, told him not to worry much. "'These companies want to make their products the best, and they don't steal data,' this is what he told me."

Another common response was: "I don't have any secret data. Even if they hack my bank account, it's a waste."

While privacy is a key issue in the civil and criminal laws of the various countries in the region, some countries have yet to address individuals' rights to privacy in their full scope, in the wake of Big Tech's increasing grip on everyday life.

The region's four-decade-old Gulf Cooperation Council trade bloc has not enforced something like the EU's General Data Protection Regulation. Entering "data" and "privacy" into the search bar of the GCC website elicits no results.

While individual data privacy is something of a neglected area in lawmaking, governments in the region have been accused of manipulating tech to spy on residents and dissidents. The UAE government has employed the messaging app ToTok to track every conversation, movement, relationship, appointment, sound and image of those who install it on their phones, according to a 2019 investigation by the New York Times.

Google and Apple removed ToTok from their app stores after the New York Times investigation, although they reappeared briefly.

In December 2019, Twitter, in its blog, said it was subjected to "various forms of platform manipulation… targeting discussions related to Saudi Arabia and advancing their geopolitical interests on the world stage". Many accounts amplified messages "favourable to Saudi authorities, mainly through inauthentic engagement tactics such as aggressive liking, retweeting and replying".

In November 2019, the US Justice Department charged two former Twitter employees with spying for Saudi Arabia by accessing dissidents' information.

Elsewhere in the Middle East, Egypt has passed a law that requires all databases and private information collected by Uber or other ride-hailing companies to be made available to unspecified authorities. 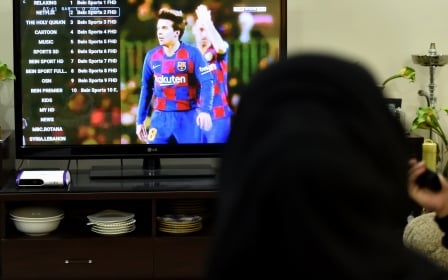 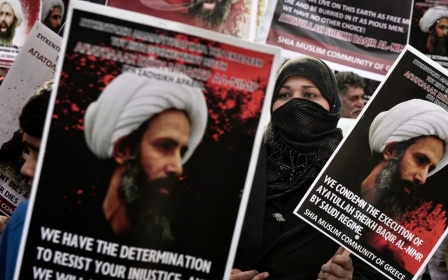