Suspect was investigated by FBI for link to suicide bomber, but was never prosecuted 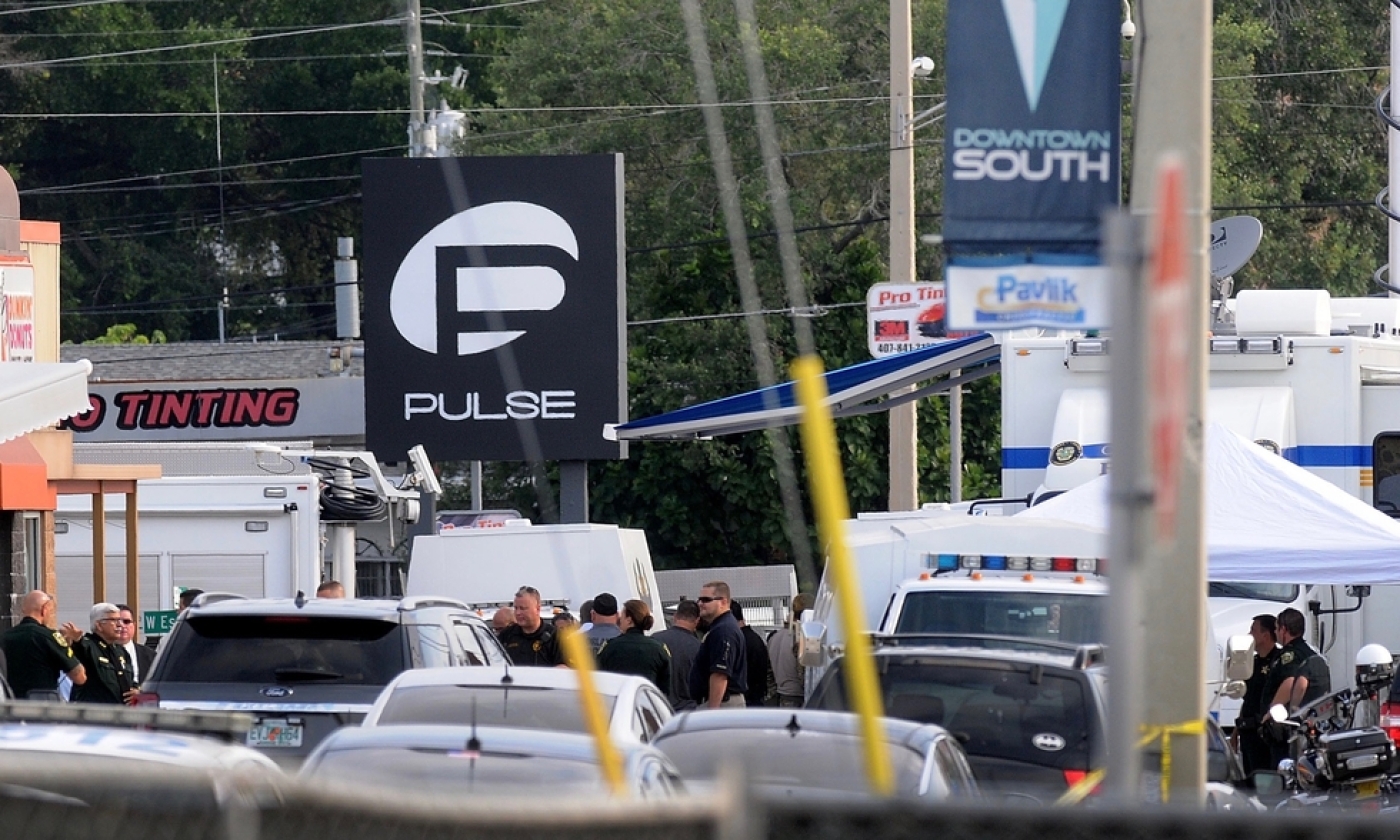 Orlando police officers outside Pulse nightclub after fatal shooting and hostage situation on Sunday morning in Orlando, Florida. (AFP)
By
MEE and agencies

Inquiries into the background of the gunman who slaughtered at least 50 people at a Florida gay nightclub on Sunday morning reveal a violent and prejudiced man.

The suspect, Omar Mateen, 29, of Fort Pierce, Florida, carried an assault rifle and a pistol into the Pulse nightclub about 2am local time and began shooting, killing 50 people and wounding at least 53, police said. After a hostage standoff of about three hours, police crashed into the building with an armoured vehicle and killed him. It was the worst mass-shooting in modern US history.

TV networks, citing law enforcement sources, said Mateen called 911 around the time of the massacre to claim allegiance to the Islamic State (IS) group and to mention the Boston Marathon bombers. Later, IS-linked news agency Amaq said that an IS militant had carried out the mass shooting.

"The attack that targeted a nightclub for homosexuals in Orlando, Florida and that left more than 100 dead and wounded was carried out by an Islamic State fighter," Amaq said in a terse statement, citing a "source". It gave no further details.

Mateen, a Muslim American of Afghan descent, is being investigated for possible links to, or inspiration from, Islamist militant groups, according to law enforcement sources.

He was interviewed by the FBI in 2013 and 2014, FBI assistant special agent Ronald Hopper told reporters on Sunday.

"The FBI first became aware of Mateen in 2013 when he made inflammatory comments to co-workers alleging possible terrorist ties," he told reporters.

"The FBI thoroughly investigated the matter, including interviews with witnesses, physical surveillance and records checks.

Later, he was interviewed by agents investigating his contacts with Moner Mohammad Abusalha, a fellow Floridian and the first US citizen to carry out a suicide bombing in Syria.

"We determined the contact was minimal and did not constitute a substantive relationship or a threat at that time," Hopper told reporters. Mateen was not under investigation at the time of Sunday's shooting and was not under surveillance, Hopper said.

Relatives had a different view of Mateen, who they say worked as a security officer and was not overly religious, but had anti-gay views and had regularly assaulted his ex-wife.

Mateen's father, who gave his name as Mir Seddique, said his son had recently been offended to see two gay men expressing affection on a Miami street.

"We are in shock like the whole country," he said. "This had nothing to do with religion."

The Washington Post reported that Mateen's father holds strong political views, including support for the Afghan Taliban. In a video he posted on Saturday, he appears to be portraying himself as the president of Afghanistan.

The Post said that Seddique Mateen, who has been referred to as Mir Seddique in some news reports, hosted the “Durand Jirga Show” on a channel called Payam-e-Afghan, which broadcasts from California. In it, the elder Mateen speaks on a variety of political subjects. Dozens of videos are posted under Seddique Mateen's name on YouTube.

The former wife of the shooting suspect, who left him in 2011, said he was violently abusive.

"He was not a stable person," the ex-wife told the Washington Post, which did not identify her because she fears for her safety.

"He beat me. He would just come home and start beating me up because the laundry wasn't finished or something like that," she told the Post.

According to the wife's account, the pair had met in New York but in March 2009 had moved in together in Fort Pierce, Florida.

The woman's parents rescued her from the relationship and the pair were later divorced, according to a court document seen by AFP.

"We know enough to say this was an act of terror and act of hate," US President Barack Obama said in an address from the White House.

While the violence could have hit any American community, "this is an especially heartbreaking day for our friends who are lesbian, gay, bisexual or transgender," he said.

White House hopeful Hillary Clinton on Sunday postponed her first joint campaign event with Obama in the aftermath of the shooting. Clinton and Obama had been scheduled to appear at a campaign event in Wisconsin on Wednesday, after he endorsed her as the Democratic candidate for November's presidential election, but this has been pushed back, her campaign said.

Presumptive Republican presidential candidate Donald Trump lost no time on Sunday in claiming the massacre showed he has been right about "radical Islamic terrorism".

In a series of tweets starting just hours after the shooting and as reports were still sketchy, Trump said the tragedy supported his views of the threat facing America.

"Appreciate the congrats for being right on radical Islamic terrorism," he said. "I don't want congrats, I want toughness and vigilance. We must be smart!"

Trump has previously argued that events like the San Bernardino shooting last December show that the US should ban Muslim travellers.

Afghan President Ashraf Ghani sent his condolences to the families of the victims. "I unequivocally condemn the horrific attack in #Orlando #Florida #USA. Nothing can justify killing of civilians," Ghani tweeted.

Leaders from countries shaken by recent militant attacks, including France and Belgium, were also among the first to express solidarity with the US.

In France, where the country remains on edge after IS militants killed 130 people in Paris last November, French President Francois Hollande reacted "with horror".

The president "expresses the full support of France and the French people to the US authorities and the American people during this ordeal," a statement from the Elysee Palace said.

Belgium's Prime Minister Charles Michel tweeted his condolences over the attack, which comes two-and-and-half months after dual strikes by militants on Brussels airport and metro that killed 32 people.

"Deeply saddened by the loss of so many innocent lives in #Orlando shooting. We join families in their grief," he said.

"On behalf of the people and government of Israel I extend our deepest condolences to the American people following last night's horrific attack on the LGBT community in Orlando," he said in a statement issued in English.

"Israel stands shoulder to shoulder with the United States at this moment of tragic loss," Netanyahu added.

Wednesday's attack at a popular Tel Aviv nightspot triggered fresh Israeli restrictions on the West Bank and Gaza Strip at the start of the Muslim holy month of Ramadan. 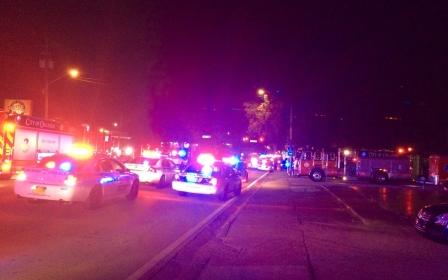 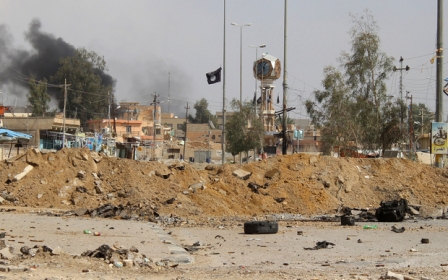 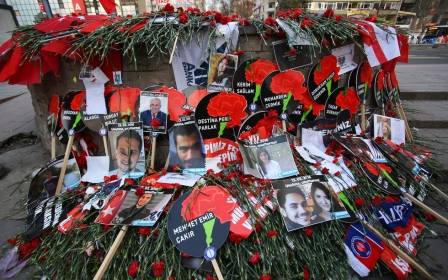