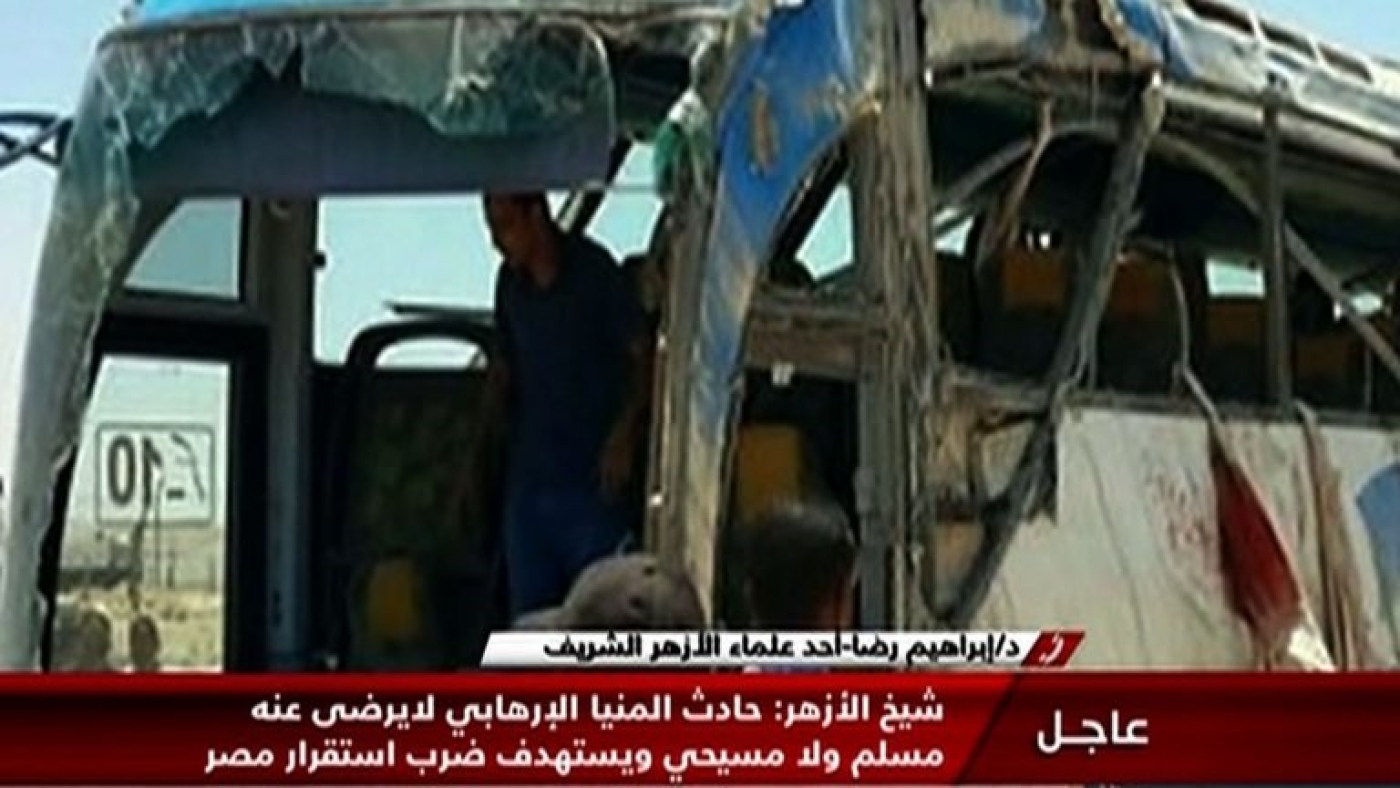 One of the buses which was attacked on Friday, in Minya province (screengrab)
By
MEE and agencies

Gunmen attacked a group of Coptic Christians as they were driving to a monastery south of Cairo on Friday, killing 28 and wounding a further 26, medical sources and witnesses said.

The group was travelling in two buses and a truck through the province, which is home to a sizeable Christian minority, he said.

An interior ministry spokesman said the attack was carried out by unidentified gunmen in three four-wheel-drive vehicles.

The attack in Minya province came after church bombings in December and April claimed by the Islamic State group that killed dozens of Egypt's Coptic Christians.

There was no immediate claim of responsibility for Friday's attack, but IS had threatened more attacks against the Coptic population, who make up about 10 percent of Egypt's population of 92 million.

About 70 have been killed in bomb attacks on churches in the cities of Cairo, Alexandria and Tanta since December.

The attacks prompted Sisi to declare a three-month state of emergency.

Muslim leaders condemned the killings. The grand imam of al-Azhar, Egypt's 1,000-year-old centre of Islamic learning, said the attack, which came on the eve of Ramadan, was intended to destabilise the country.

"I call on Egyptians to unite in the face of this brutal terrorism," Ahmed al-Tayeb said from Germany, where he was on a visit. The Grand Mufti of Egypt, Shawki Allam, condemned the perpetrators as traitors.

State television reported six air strikes against "terror camps in Libya", specifying that training camps were hit in the eastern Libyan city of Derna. Witnesses there reported four strikes by a single aircraft.

"Egypt will not hesitate in striking terror camps anywhere, either inside (the country) or outside it," Sisi said.

A spokesman for the pro-Al-Qaeda Majlis Mujahedeen Derna, which controls the city, said the Egyptian air force carried out eight raids on the city without causing casualties.

Egypt's Copts are vocal supporters of Sisi, who has vowed to crush militancy and protect Christians.

But many Christians feel the state either does not take their plight seriously enough or cannot protect them against determined fanatics.

The government is fighting insurgents affiliated to Islamic State who have killed hundreds of police and soldiers in the Sinai peninsula, while also carrying out attacks elsewhere in the country.