Half of Yemenis suffering malnutrition as famine looms: UN 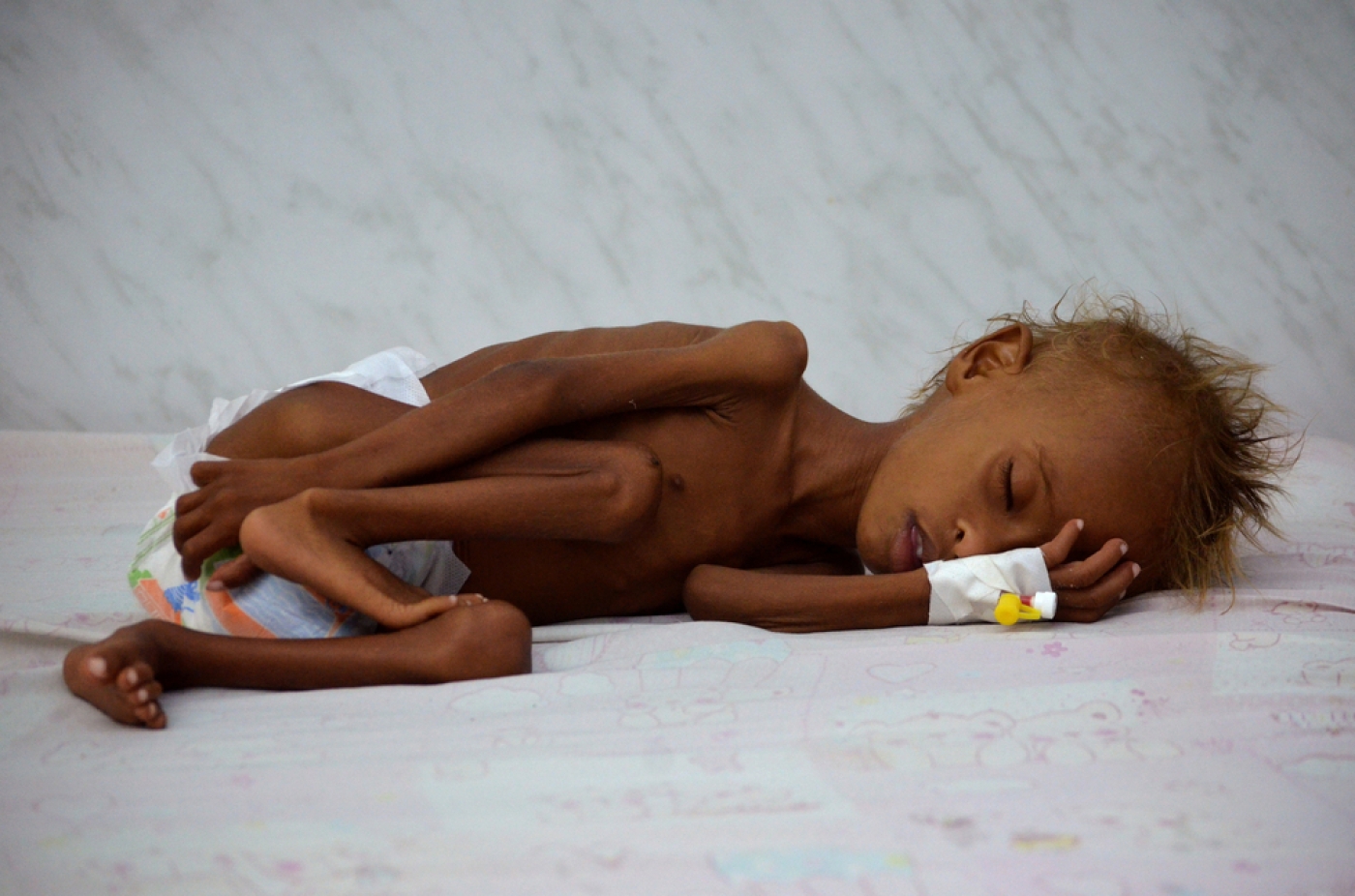 Salem Abdullah Musabih, six, lies on a bed at a malnutrition intensive care unit at a hospital in the Red Sea port city of Hudaida (AFP)
By
Rori Donaghy

More than half of Yemen's population is suffering from malnutrition, the United Nations told MEE on Wednesday, while warning the war-torn nation faces imminent famine.

A spokesperson for the UN’s office of humanitarian affairs said 51 percent of the population - some 14.1 million people - “are suffering from food insecurity and malnutrition today”.

Deputy spokesperson Jens Laerke said areas of Yemen have been designated either in crisis or in emergency - just one level below famine.

“We are highly concerned about these pre-famine conditions,” Laerke told MEE.

The UN children's agency UNICEF has reported that 1.5 million children are suffering malnutrition, including 370,000 enduring very severe malnutrition that weakens their immune system.

Whilst Yemen has long been the Arab world’s poorest country, its two-year-old civil war has exacerbated poverty, particularly since Saudi Arabia launched a military coalition in March 2015 to push back Houthi rebels viewed by Arab Gulf states as proxies for regional rival Iran.

Laerke said the number of people who are food insecure in Yemen has risen 10 percent since June 2015, with seven million people described as being “severely food insecure”.

His comments come on the back of senior UN official Stephen O’Brien saying it is “outrageous” that 80 percent of 24.4 million people require some form of humanitarian assistance.

“I am particularly concerned about the healthcare system as most of the health facilities in 16 out of 22 governorates are either not functioning or only partially functioning, denying thousands of Yemenis access to much-needed essential health services,” said O’Brien, who is the UN under-secretary-general for humanitarian affairs and emergency relief coordinator.

O’Brien made the comments in the Yemeni capital Sanaa on Tuesday at the end of a three-day trip to the country where he called for aid workers to be given “safe and unhindered” access to provide support for people in need.

The UN official travelled to Al Hudaida on Yemen’s west coast where he made a “heart-breaking” visit to a hospital filled with malnourished children.

“Mothers bring their malnourished children for treatment but there is simply not enough medicines to treat them,” he said. “The quantities of food, medicine and fuel entering the country are way below the needs and must be increased as a matter of urgency.”

O’Brien warned that while the UN has increased its humanitarian assistance to Yemen since April 2015 - reaching four million people in need - its programme is only 46 percent funded and has a deficit of $880 million.

“More funding is urgently required for the scale-up of assistance across the country,” O’Brien said. “The UN and our humanitarian partners are ready to do so, but donors need to support resources mobilisation efforts.”

The UN said 13 health workers have been killed and 31 injured in fighting since March 2015, while some 70 health centres have been damaged or destroyed in the conflict.

At the same time as calling for better humanitarian access, O’Brien urged all sides to restart stalled peace talks and find a way to bring an end to the war.

“The best humanitarian relief that can be provided is an end to the conflict,” he said. “I urged the authorities, as I urge other parties to the conflict, to return to political negotiations without delay to reach a negotiated solution.”

Meanwhile, "smashed cranes" at Yemen's rebel-held Hodeida port are hindering the entry of relief supplies to ease a deteriorating humanitarian crisis in the war-torn country, the UN aid chief said on Wednesday.

On a visit to Saudi Arabia, O'Brien told reporters that aid flow needed to increase at the Red Sea port, through which 80 to 90 percent of Yemen's supplies transited before the war.

"The real issue is the restriction of unloading capacity at the port because the cranes are smashed," said O'Brien, who heads the UN Office for the Coordination of Humanitarian Affairs (OCHA).

He did not mention the cause of the damage to the cranes, but in August last year he said coalition air strikes on the port were in contravention of international humanitarian law.