Palestinian women from the al-Dalo family react at the al-Shifa hospital in Gaza City after victims were brought to the morgue to be prepared for burial after the al-Dalo home was destroyed. (AFP)
By
MEE and agencies

Hamas said on Wednesday its military commander Mohammed Deif was alive and still calling the shots in the ongoing war with Israel in and around Gaza.

"The head of the Ezzedine al-Qassam Brigades Abu Khaled is still alive and leading the military operation," a source close to the Islamist movement told AFP, using Deif's nom-de-guerre.

His remarks were made after an Israeli air strike levelled a six-storey house in Gaza City, killing Deif's wife and infant son.

It had not been immediately clear whether Deif had also been killed or injured in the strike, which also killed another woman and a teenager.

Hamas spokesman Sami Abu Zuhri also issued a statement, saying Israelis would not be safe until Deif decided so.

"The occupation will pay for its crimes against Palestinian civilians and those living around the Gaza border will not return home until Mohammed Deif decides so," he said.

Hamas used its Al-Aqsa television channel to urge Palestinians to attend the funerals of Deif's wife and son who were killed in the raid that wounded at least 45 others, emergency services said.

The Israelis see him as "the brains" behind the campaign of suicide bombings that targeted buses and public places in Tel Aviv and Jerusalem until 2006 and consider him "personally responsible for the deaths of dozens of civilians".

"This policy of 'quiet for quiet' effectively means that Hamas is the initiator and the one deciding when, where and how to shoot at Israeli citizens," he wrote on his Facebook page.

"Hamas is controlling the height of the flames and choses when to disturb the rhythm of life for people in Israel," he said, indicating the rocket fire from Gaza was unlikely to stop.

"When we speak seriously about Israelis' security we must understand that there is no other option other than decisive action with one meaning - toppling Hamas."

Lieberman is one of the most hardline members of Israel's inner security cabinet, which was meeting on Wednesday afternoon to discuss the situation, media reports said.

"He is an arch murderer and as long as we have an opportunity we will try to kill him," Interior Minister Gideon Saar told army radio.

Fighting over Gaza resumed on Tuesday afternoon when truce talks in Cairo collapsed with each side blaming the other.

Egypt on Wednesday called on Israelis and Palestinians to resume negotiations, expressing its "profound regret at the breach of the ceasefire in Gaza."

The Israeli military said it hit "more than 25 targets" in Gaza on Tuesday, the first air raids since 10 August. A woman and her two-year-old girl were killed.

In a strike Wednesday morning on the southern Gaza town of Deir el-Balah a pregnant woman, three children and two men were killed, all members of the Aloah family, emergency services said.

They said that the woman was nine months pregnant but medics were unable to save the foetus.

Also on Wednesday, the Israeli army called up 2,000 reservists, a fraction of the 27,000 called up when fighting began weeks ago.

Hamas's armed wing, the Ezzedine al-Qassam Brigades, said Israel had "opened the gates of hell on itself" by the killings and warned that the Jewish state would "pay the price for its crimes."

The al-Qassam Brigades said in a statement that it fired 34 rockets into Israel throughout Tuesday, hitting Tel Aviv and the southern city of Beersheva.

An Israeli military statement put the number fired at "about 50" but reported no casualties.

"A rocket hit an open area in the Tel Aviv metropolitan area," it said and confirmed that two rockets landed near Beersheva, which is home to around 200,000 Israelis.

Air raid sirens were also heard in Jerusalem, with Hamas claiming a rocket attack on the city.

Police said it appeared that a rocket fell on empty ground in the occupied West Bank, outside Jerusalem.

Israeli Prime Minister Benjamin Netanyahu ordered a new round of air strikes on Gaza and recalled his negotiators from Egyptian-mediated ceasefire talks in Cairo.

"The rocket fire which broke the ceasefire also destroyed the foundation on which the talks in Cairo were based," Netanyahu spokesman Mark Regev told AFP early Wednesday.

"The Egyptian initiative is based on a total and unconditional cessation of hostilities, which was clearly broken when rockets were fired into Israel."

'Ceasefire has broken down'

"We are leaving...but we have not pulled out of negotiations," he told AFP, adding the Palestinians were waiting for Israel to respond to their truce proposal.

"We will not come back (to Cairo) until Israel responds," he said.

The fighting shattered nine days of relative quiet in the skies over Gaza.

A senior Hamas official, Ezzat al-Rishq, warned Israel it would "not enjoy security so long as the Palestinian people do not".

But Israel's US ally put the blame squarely on the group itself.

"As of right now, with today's developments, we are very concerned and it is our understanding the ceasefire has broken down."

An AFP reporter saw hundreds of Palestinians streaming out of Shejaiya, an eastern area of Gaza City which has been devastated by more than a month of fighting between Israel and the militant Islamist Hamas movement.

More poured out of the Zeitun and Shaaf areas, alarmed by a series of explosions and heading to shelter in UN schools, local witnesses said.

In Israel, the army said that it ordered that public bomb shelters within 80 kilometres (50 miles) of the Gaza border, be opened ready for use.

That includes Tel Aviv and Jerusalem.

Israel has vowed not to negotiate under fire, and Netanyahu has pledged "a very strong response" to any resumption of rocket attacks.

The Cairo talks centre on an Egyptian proposal that meets some Palestinian demands, such as easing Israel's eight-year blockade on Gaza, but puts off debate on other thorny issues until later.

Amnesty International renewed an appeal for access to Gaza.

"Valuable time has already been lost," it said.

Egypt's proposal calls for both sides to immediately stop shooting and includes provisions relating to opening the borders to allow for free movement of people, goods and construction materials, as well as a clause on regulating the economic crisis within the impoverished enclave.

But crucially, it postpones discussions on issues such as a port and airport for another month, until "after calm and stability returns," along with talks over exchanging the remains of two Israeli soldiers for the release of Palestinian prisoners. 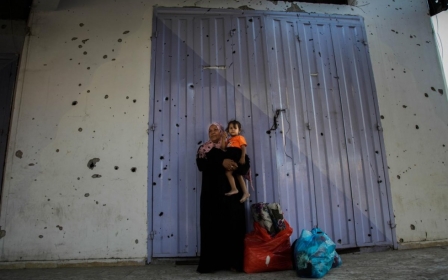 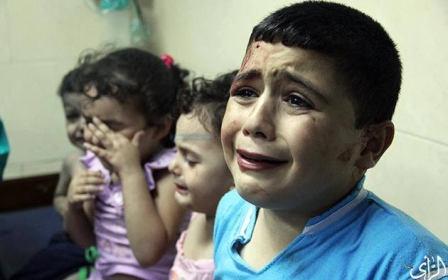 Gaza Under Attack
New life among all the death in Gaza