Ismail Ajjawi, a Palestinian refugee from Lebanon set to attend Harvard, was denied entry to the US last week Harvard University is working to help a Palestinian refugee start the upcoming semester on its campus after he was deported from the United States late last week despite holding a valid student visa and scholarship.

In an email to Middle East Eye on Tuesday, Harvard spokesman Jason Newton confirmed that Ismail Ajjawi was denied entry into the US.

"The university is working closely with the student's family and appropriate authorities to resolve this matter so that he can join his classmates in the coming days," Newton said.

Ajjawi was set to begin his first year at Harvard this autumn as a member of the graduating class of 2023.

Despite holding a visa to study in the US and a scholarship from non-profit group AMIDEAST, Ajjawi was stopped at Logan International Airport in Boston on Friday, Harvard student newspaper The Crimson reported this week.

He was subsequently deported to Lebanon where he resides, the newspaper said, after being interrogated for several hours at the airport.

Ajjawi said US immigration officials took his phone and laptop, and later questioned him about his social media activity, The Crimson reported.

An official also asked him about his religious practice in Lebanon, he said.

"When I asked every time to have my phone back so I could tell them about the situation, the officer refused and told me to sit back in [my] position and not move at all," Ajjawi wrote in a statement after his deportation, The Crimson reported.

"After the five hours ended, she called me into a room, and she started screaming at me. She said that she found people posting political points of view that oppose the US on my friend[s] list."

Ajjawi said he told the officer he didn't make political posts and had nothing to do with his friends' posts.

But the officer "cancelled Ajjawi's visa, informed him he would be deported, and allowed him a phone call to his parents", The Crimson said.

The upcoming academic year at Harvard begins on 3 September.

A State Department official told MEE in an email on Tuesday that the department "cannot discuss the details of individual visa cases" due to US privacy laws.

"Generally, visa applicants are continuously screened, both at the time of their application and afterwards, to ensure they remain eligible to travel to the United States," the official said, before directing MEE to the Department of Homeland Security (DHS).

DHS did not immediately respond to MEE's request for further comment. AMIDEAST, the organisation that issued Ajjawi a scholarship to attend Harvard, also did not immediately respond to a request for comment on Tuesday.

After the US authorities denied entry to Ajjawi, critics pointed out that it has become common for immigration officials to deport people with valid visas after searching their electronic devices.

Tarek Izmail, a senior staff attorney in the Creating Law Enforcement Accountability & Responsibility programme at CUNY School of Law, said US border agents are "regularly using information gleaned in secondary inspection", including information they get from electronics.

He said on Twitter that information is being used "to deny admission to people with valid tourist, student, and immigrant visas".

In written testimony to American lawmakers in September 2017, a top US Customs and Border Protection (CBP) official said agents denied entry to the US to 1,400 individuals after secondary inspection in the 2017 fiscal year.

On Tuesday, Summer Lopez, senior director of free expression programmes at PEN America, called the decision to bar Ajjawi from entering the US "a move so perverse, so grotestque as to defy explanation".

"Preventing people from entering the country because their friends critiqued the US on social media shows an astounding disregard for the principle of free speech," Lopez said in a statement.

"The idea that Ajjawi should be prevented from taking his place at Harvard because of his own political speech would be alarming; that he should be denied this opportunity based on the speech of others is downright lawless."

Ajjawi's case comes amid a wider crackdown on immigration into the US under President Donald Trump, who in 2017 signed an executive order restricting citizens of several Muslim-majority countries from being able to enter the country.

Known as the Muslim Ban, the order has separated families, blocked students from attending American universities, and stranded travellers.

In July, Harvard President Lawrence Bacow wrote a letter to US Secretary of State Mike Pompeo and Kevin McAleenan, the acting secretary of Homeland Security, expressing his "deep concern over growing uncertainty and anxiety around issues involving international students and scholars".

Bacow said visa delays and uncertainty around US immigration procedures have made "attendance and engagement in the university unpredictable and anxiety-ridden" for scholars from around the world.

"Students report difficulties getting initial visas—from delays to denials. Scholars have experienced postponements and disruptions for what have previously been routine immigra­tion processes such as family visas, renewals of status, or clearance for international travel," he said. 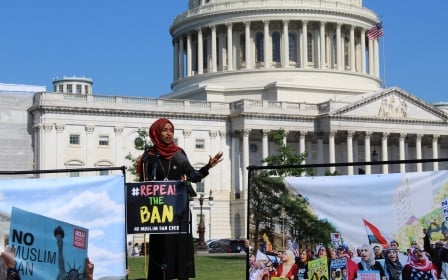