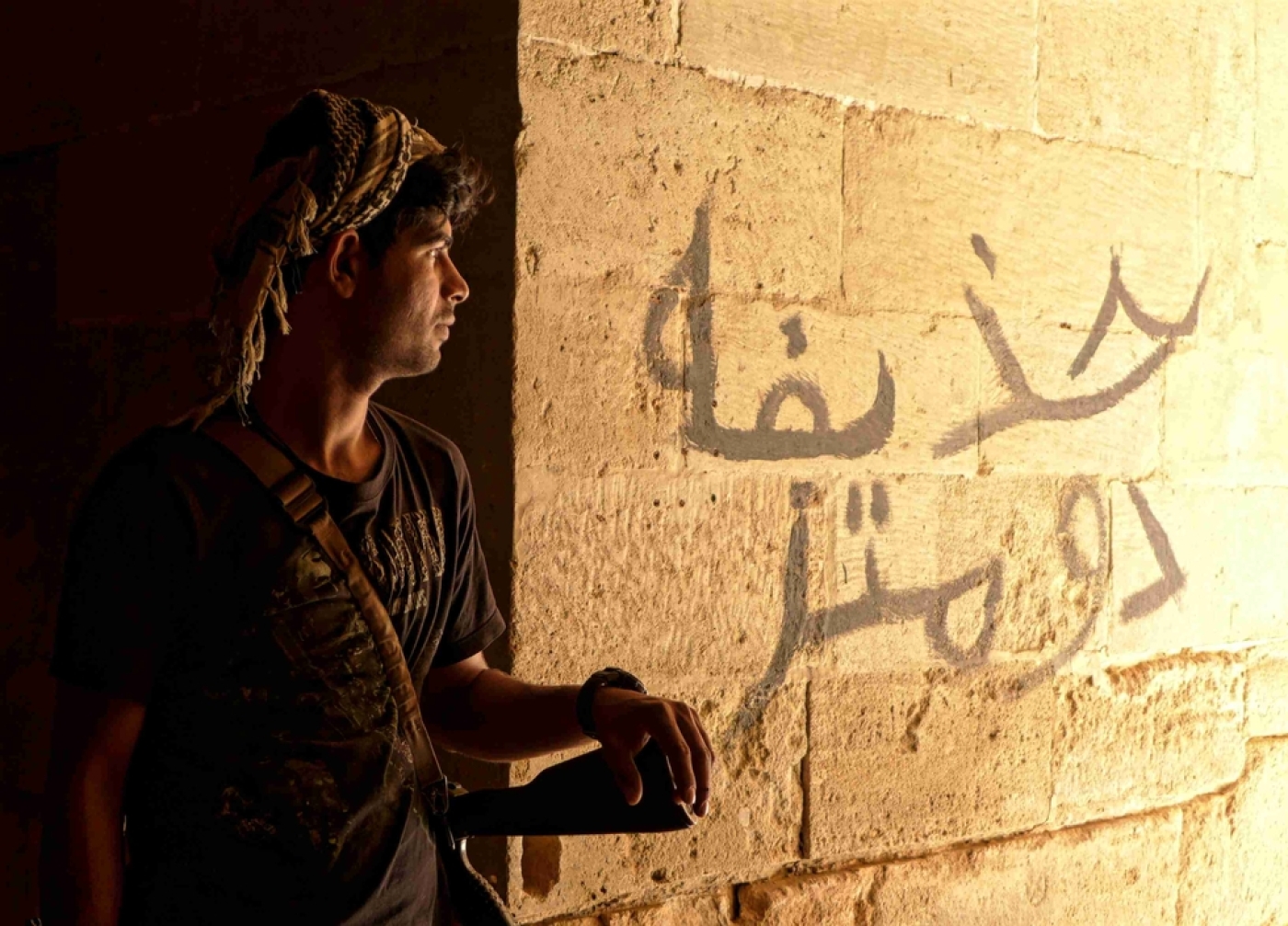 Islamic State graffiti is scrawled on one of the ancient ruins in Hatra, Iraq (Tom Westcott/MEE)
By
Tom Westcott

HATRA, Iraq - Akeel Abu Zein walked towards the sprawling sand-coloured ruins of the ancient city of Hatra, the fortified walls of which were closely guarded by Islamic State militants during the three years they used it as a desert headquarters.

"Be careful where you tread, we are still finding IEDs here," said the Iraqi captain, warning of the danger of improvised explosive devices.

"Daesh [the Islamic State group] planned to completely destroy Hatra before leaving, and we found IEDs and booby-traps rigged everywhere, but our advance was very fast and took them by surprise, so they didn't have time to carry out their planned destruction."

Many of the IEDs had been made in an explosives workshop near the entrance to the Unesco world heritage site, liberated from IS by Iraq's Hashd al-Shaabi (Popular Mobilisation) forces last week.

More than 100 newly prepared IEDs along with a separate pile of triggers for the deadly devices are neatly stacked beneath wall paintings quoting verses from the Quran. Zein says they have lost count of how many IEDs had been deactivated in Hatra by Hashd Al-Shaabi military engineering units.

IS demolished parts of ancient Hatra with explosives and bulldozers after seizing control of the area in mid-2014 but most of the ancient structures were left intact.

Unbeknown to the outside world, where historians and archaeologists voiced fears that Hatra would be levelled to the ground like Iraq's ancient city of Nimrod, IS had other plans for the historic site.

Safe in the knowledge that warplanes would never attack one of Iraq's most valuable pieces of heritage, IS turned Hatra into a regional headquarters, making use of the 2,000 year-old temples in the capital of the first Arab kingdom.

Fleeing residents told MEE that the walls were patrolled by IS fighters 24 hours a day and that ordinary IS personnel were forbidden from entering the site.

One temple was turned into a workshop for making car-bombs, which militants used unsuccessfully against the advancing Hashd al-Shaabi forces who, after almost three years of fighting IS, have become adept at taking out VBIEDs (vehicle-borne improvised explosive devices).

Parts of the site were used as a training ground for some of IS's most elite fighters, as well as children as young as six known as "Caliphate Cubs".

In one corner overlooking the site, mortar shells were lined up in rows outside two blackened arches, from where IS targetted Iraqi air force helicopters circling overhead with anti-aircraft guns.

These were just two of the many IS fighting positions across the site that air strikes managed to destroy with very little impact on the ruins.

Much of the historic structure remains intact. Layla Smith, the regional head of antiquities, said the damage to Hatra does not compare with what has happened to Iraq's other archaeological sites targeted by IS.

The full extent of the loss of precious artefacts is still to be established.

Storage facilities have been ransacked, with shelving units overturned and metal boxes, full of archaeological items, emptied. The floor of one room is two inches deep in carved fragments, over which the boots of Ammar, a special forces soldier, crunched.

For sure, they stole any artefacts of value from here. Quite a lot of stuff is missing

He held up a few carefully labelled bags which escaped the ransacking - one filled with pieces of bone. "They didn't even leave these small things alone, they emptied everything out of boxes and bags onto the floor," he said, shaking his head.

"For sure, they stole any artefacts of value from here. We have been told that quite a lot of stuff is missing."

Of particular concern is the fate of an ancient tomb, which archaeologists visiting the site after liberation told Iraqi soldiers contained valuable artefacts.

The tomb's entrance had been uncovered by IS but, lying several metres underground, no one has yet been able to access the tomb itself to investigate further.

Militants also smashed through bricked-up walls, behind which archaeologists stored some of the site's most precious statues. These have been decapitated, like other statues still standing in situ, their faces smashed. Others have been reduced to rubble.

In a propaganda video released in 2014, IS members filmed themselves smashing the faces of carved images lining the walls of one temple, claiming they were un-Islamic.

Other images carved in relief, too high to reach, were obliterated by gunfire. Across Hatra, statues and pillars were used for repeated target practice.

At the farthest end of the site, in an area still inaccessible due to ongoing IED clearance, stands a rusting crane which, soldiers said, dated back to the time of Saddam Hussein.

Before 2003, Iraq's former leader started rolling out a restoration programme across some of the country's most important sites, including Hatra.

Thousands of stones used in the Hatra restoration were inscribed with Hussein's initials, apparently in imitation of the sixth-century BC Babylonian king Nebuchadnezzar II.

Even 14 years after his rule was overthrown, Hussein's presence lingers. 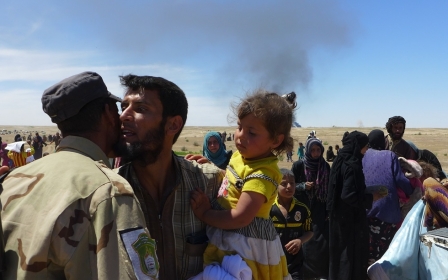