'He was my friend': Iraqi pilots hunt for fallen comrades in IS killing fields

Iraqi air force men seek closure for colleagues, whose bodies were hidden by Hawija residents to prevent their desecration by IS 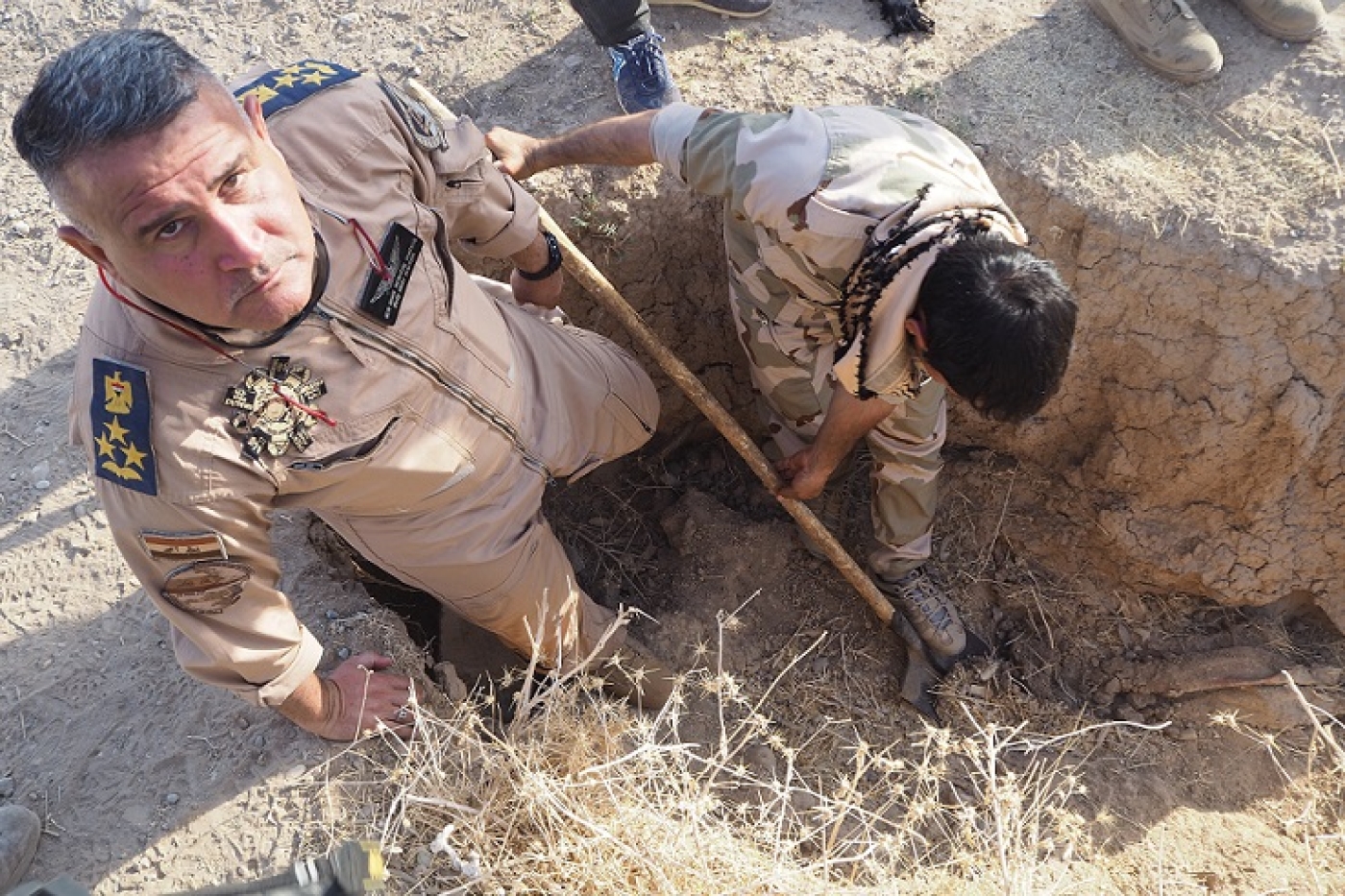 HAWIJA, Iraq - On the outskirts of this town, recently liberated from more than three years of Islamic State (IS) rule, dust is thrown up from the spades of a small group of Iraqi Air Force pilots searching for the body of a comrade, which they have waited for more than a year and a half to reclaim.

In the heat of the afternoon sun, the men take it in turns to hack into the rough ground. Among the military personnel are senior aviation commanders who share the digging with the younger men.

A low-flying helicopter wheels overhead and the men pause their work to salute. Finding the bodies of three Iraqi pilots killed when their aircraft was shot down by the Islamic State (IS) group in March 2016, is a mission of duty Air Force personnel have waited a long time to complete.

Several local residents undertook daring feats at huge personal risk to rescue and bury the bodies. IS pulled from the wreckage the bodies of two of the pilots, already burned in the crash, decapitated them and then strung up from checkpoints to terrorise residents and warn the Iraqi military. 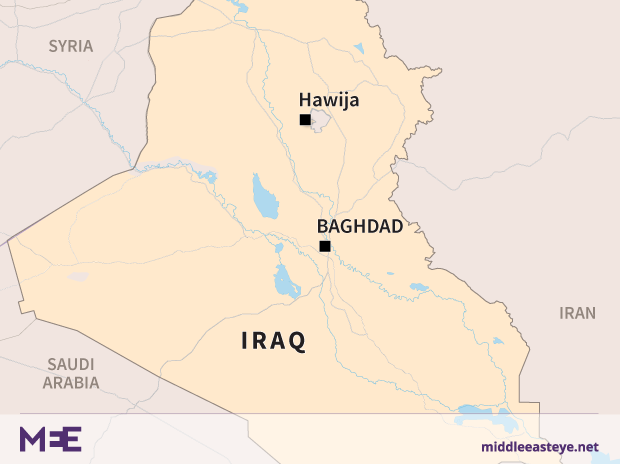 “We knew we had lost the plane but we didn’t know what happened to the pilots until we got a call from a friend of ours living in Hawija,” Brigadier-General Omar Shafeeq told MEE.

“It was something terrible for us to hear, so we asked our friend if there was anything he could do to remove the bodies from this terrible display, without endangering his own life.”

The Hawija resident came up with a daring plot. He sent a friend to strike up a conversation with two IS militants manning a checkpoint while he climbed up a sandbank behind them and cut down one of the bodies and a head, dragging them a short distance away. The men returned at night and buried the pilot’s body and head in a wadi (ravine) near the checkpoint.

The next day, furious militants scoured the area for the missing body and, noticing the recently-dug earth, disinterred the body and cast it into the dry wadi for wild dogs to eat.

'He was my friend'

The exhausted Air Force personnel pause to confer. They have been digging for hours and have found nothing, yet their friend from Hawija, concealing his identity beneath a scarf, is certain this is the right spot.

He recalls that some 24 hours after IS disinterred the body, the seasonal rains came, and the men discuss the possibility that the flow of water moved the body. One of the men, sweat pouring from his face, starts digging a few metres away and the spade suddenly drives deeper into the ground, encountering something soft.

“Be careful, be careful,” shouts Shafeeq. The men start clearing the earth with their hands. They uncover a rib bone and a fragment of fabric. They pore over it until they identify it as an Iraqi Air Force uniform.

“Bring the body bag,” someone shouts, while the men use their hands and gentler digging to gradually reveal more of the remains.

In the back of the Toyota pick-up truck, beside the small pile of body bags, there is already a box containing the remains of one of the other pilots. A local farmer risked his life in a secret one-man operation to salvage and hide his body from IS.

“That’s General Ali. He was my friend,” said Commander Mohamed, gazing at the compact box holding the remains of Brigadier-General Ali Hassan al-Abboudi.

“The farmer called us and told us that three young Daesh [IS] guys had found a body thrown from the plane and, for some reason, had hidden it by the river, before going back into town, and the farmer volunteered to try to retrieve the body before the boys returned,” Mohamed said.

He was very brave, and crawled 700 metres on his stomach down to the river to reach the body

“He was very brave, and crawled 700 metres on his stomach down to the river to reach the body and dragged it back from there to his farm, where he buried the body. He did everything in complete secrecy and didn’t even tell his family.”

The pilot’s body had been partially dismembered in the crash and the IS boys returning to the spot and searching for the man found only a leg. IS members spent three months obsessively combing the area, looking for the rest of the body, releasing a statement saying they had captured al-Abboudi alive, threatening to kill him unless the Iraqi government negotiated with them.

“It was a big lie and, of course, we knew that because our friend had already buried General Ali’s body,” said Mohamed. Still fearing detection, once IS had stopped searching for the body, the farmer reinterred the remains in another location. In the year and a half, the body had barely decomposed which, Mohamed said, indicated he was a true martyr.

Colonel Hussein, carrying a black body bag down the hill, said the Iraqi Air Force had planned to conduct a ground operation with the assistance of American forces to get the bodies back after the crash.

“The American soldiers stopped the operation because they didn’t want to risk losing any men, so we could do nothing but wait for liberation to get the bodies of our comrades back,” he said. “We have been here working on the operation to liberate Hawija and this was the first day after liberation we were free, so we came straight here to look for our comrades.”

The remains, later identified as those of Lieutenant General Mohamed al-Sheikhli, barely fill half the black bag, which the men carry up the hill and lay reverently in the back of the Toyota beside the box containing the remains of al-Abboudi.

At the end of a long day, the Air Force had reclaimed the bodies of two of the three pilots. The search continues for the third.

These three men were my friends and my colleagues. We trained together and worked together for many years.

“I am very sad. It is a sad day for us,” said Shafeeq. “These three men were my friends and my colleagues. We trained together and worked together for many years. We hope it won’t take us long to find the third body.”

The Iraqi Air Force personnel are among many returning to liberated Hawija to search for missing friends and relatives.

Hassan, a former Hawija resident who joined Iraq’s Hashd al-Shaabi (Popular Mobilisation) forces, which played a key role in liberating the town and hundreds of kilometres of outlying territory and villages, stands on duty at a checkpoint bridge in central Hawija every day.

He asks returning locals if they have any information about mass graves used by IS as part of his search for the body of his brother, a former policeman executed by IS in 2014. On his phone are screenshots from an IS video showing the body of his dead brother hanging from a lamp-post in the town square, just metres away from where he now stands every day.

He is one of many people who are hoping for the closure of finding a body his family can honour with a proper burial. On the day of liberation, one of the first residents to enter the town was a woman who had five family members missing, including two of her sons, all of whom were abducted by IS.

“Daesh killed many, many people. They killed a ten-year-old boy because he wrote the word "Daesh" on a wall and they hate that word; they killed young men and made their families watch while they did it; they cut people’s heads off in public, put their heads on top of the bodies and left them in the town square for everyone to see,” Hawija’s mayor, Saban Halaf Ali al-Jibouri, told MEE, describing three years of almost unimaginable cruelty witnessed by the people of the town. 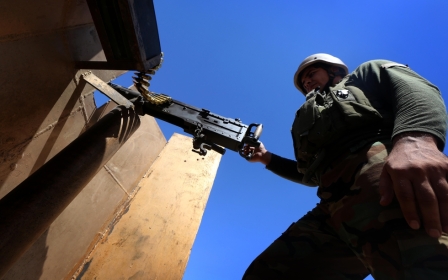 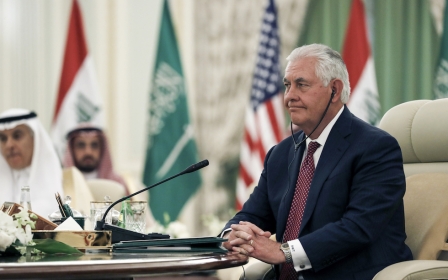 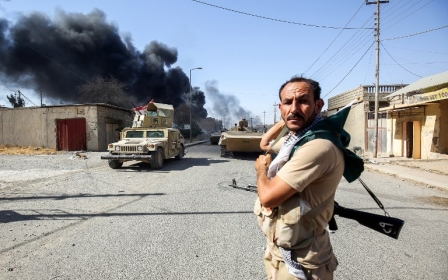