From 'Hello MBS' to a kidnap attempt: Sundance shines spotlight on Saudi schemings 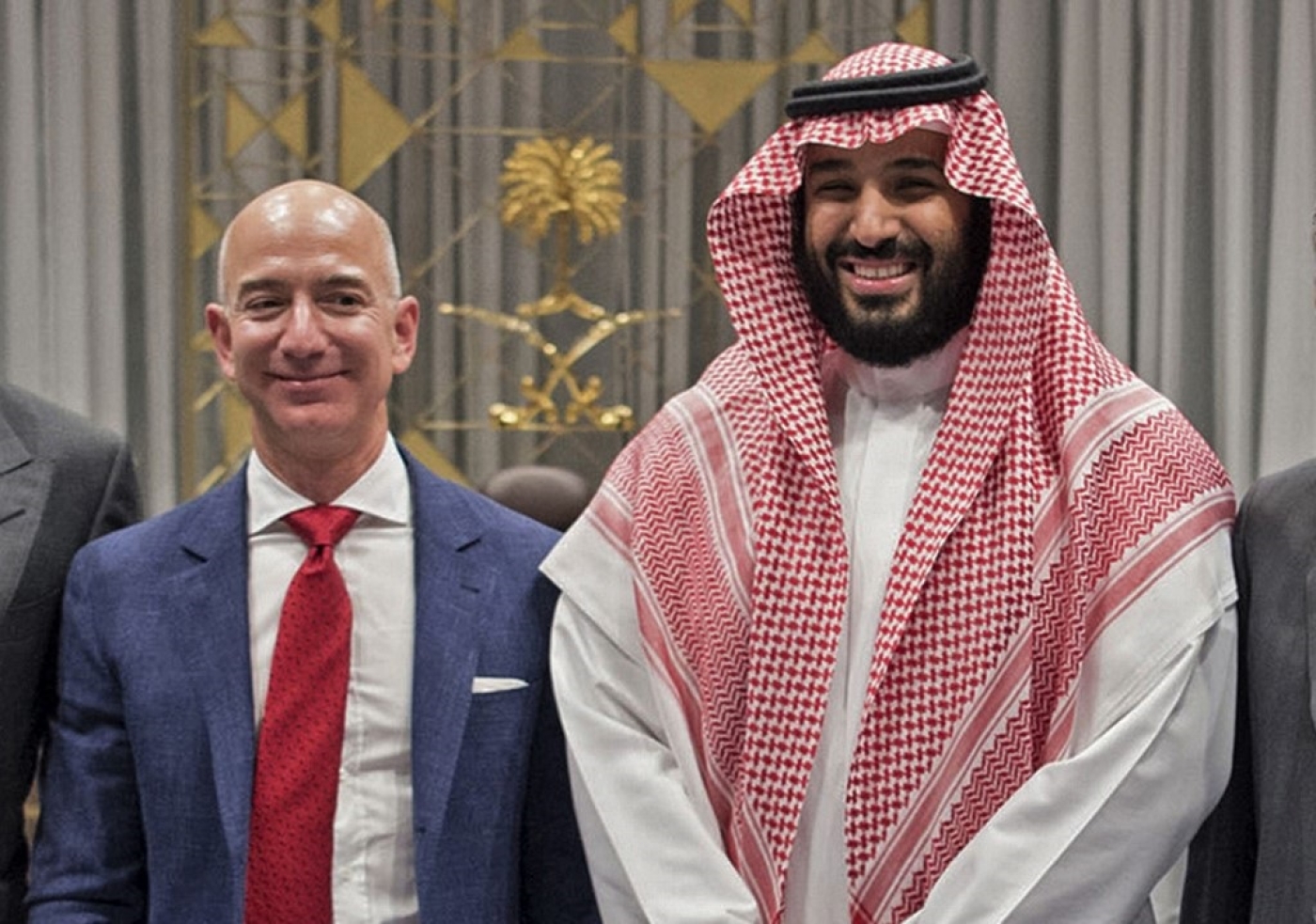 A rush of stories containing new allegations about the extent of Saudi Arabia's operations targeting exiled dissidents and critics in the US and Europe have been published just in time for the Friday premiere of a new film about the murder of Jamal Khashoggi at the Sundance Film Festival.

From the purported hacking of Amazon CEO Jeff Bezos's phone by Saudi Crown Prince Mohammed bin Salman to a Saudi dissident who says his government tried to kidnap him from the US, the week has seen one bombshell after another, keeping forensic experts and Saudi trolls busy.

The stories come as Oscar-winning director Bryan Fogel's film about the killing of Khashoggi, a columnist for the Bezos-owned Washington Post at the time of his death in the Saudi consulate in October 2018, was screened for the first time at the renowned Sundance festival in Utah.

"The killing of Jamal Khashoggi in 2018 was a historic event... Now it's poised to turn into something else: a cinematic event," the Washington Post said in a story published ahead of the premiere of The Dissident.

The same story noted that the movie was "already influencing developments" and cited approving comments by Agnes Callamard, the United Nations special rapporteur who investigated Khashoggi's death, who told the paper: "It's far more powerful than any report I can write in terms of delivering the story to a great number of people."

With Middle East Eye's past reporting on Saudi threats to dissidents and its infiltration of Silicon Valley in the spotlight, MEE took a step back from the fray to reflect on what was actually revealed and what questions remain:

It all started late Tuesday as The Guardian and the Financial Times, citing forensic experts, reported that it was likely that a WhatsApp account used by Saudi Crown Prince Mohammed bin Salman had hacked Bezos's phone in May 2018.

In fact, the allegations that the kingdom had hacked the Washington Post owner's phone were first made last March by Gavin De Beeker, who had been hired to discover how Bezos's intimate text messages to his girlfriend had landed in the National Enquirer.

What was new this week was the allegation that it was the crown prince himself - or at least a WhatsApp account he uses - that had unleashed the hack through a video file he shared with Bezos.

But as of late Tuesday, what was not yet clear was that FTI Consulting, the digital security firm also hired by Bezos, had come to its conclusions back in November, something that became evident when Motherboard released a full copy on Wednesday.

Back to Tuesday evening: a little over an hour after the Guardian report was published, two UN special rapporteurs announced that they would be making a statement the following day about the allegations.

Sure enough, on Wednesday afternoon they released a statement and the annex of a report - which MEE understands will come out in full in May - revealing yet more about the alleged hack and calling for an immediate investigation by US authorities and others.

Paired with the FTI report, there were now juicy details out in the open - that Bezos had opened their WhatsApp communications with a "Hello MBS" and that the crown prince had sent a photo of a woman that looked like his girlfriend with a snarky message, months before his affair was made public.

Slightly lost in the details, however, were calls from forensic experts, including those like Citizen Lab's Bill Marczak who have investigated other suspected Saudi hacking cases, for caution.

The FTI evidence raised questions, they warned, but more investigation was needed to determine both if and how Bezos was hacked. Saudi officials meanwhile have called the allegations "absurd".

Next up was the news, published by the Guardian, that a UK High Court had granted Saudi dissident and satirist Ghanem al-Masarir permission to take Saudi Arabia to court over allegations that the kingdom used spyware to hack two of his phones.

Masarir, a 39-year-old who hosts a popular YouTube show which often ridicules the Saudi government, alleges that the kingdom used spyware from the Israeli company NSO Group in 2018 to access the microphones and cameras in his phones to watch his every move.

He also is bringing a claim after he and another man, Alan Bender, who has sparked some intriguing news reports of late, were attacked by two men in front of Harrods in August 2018, an assault he alleges was directed by the Saudi government and which Scotland Yard has investigated.

Masarir issued his legal claim in the UK High Court last November, but had to wait on the court to greenlight his case because he is suing a foreign government. That permission officially came through on 10 January, his lawyer, Martyn Day of Leigh Day solicitors, told MEE.

The proceedings could easily set a precedent for future and ongoing cases involving hacking in the country, Day told MEE on Friday.

"We anticipate that if successful this case will not only strengthen protection for critics and dissidents of oppressive regimes, but would also send a clear message that states such as the Kingdom of Saudi Arabia would be prevented from targeting individuals once resident in the UK," he said.

Some analysts were quick to point out that, unlike the findings in FTI's Bezos investigation, forensic analysts had concluded with "a high degree of confidence" that Saudi Arabia was behind the hack.

Hours after the Ghanem news came the next bombshell: The Daily Beast's story of an outspoken Saudi dissident living in California who said his government had planned to kidnap him weeks after Khashoggi's murder, but was thwarted by the FBI.

Abdulrahman al-Muteiri, 27, who first came to the US on a Saudi government scholarship, was studying at the University of San Diego when he started to speak out against the Saudi religious establishment and reportedly had his scholarshp revoked.

After Khashoggi's murder, Muteiri, who posts popular YouTube videos, started speaking out directly against the crown prince, whom the CIA has concluded ordered his killing.

Muteiri told the Daily Beast that his father, accompanied by a Saudi man, flew to the US to bring him back against his will to the kingdom late in 2018, which he only learned later from an FBI agent.

According to the report, the FBI turned the two men away at Los Angeles International Airport and sent them back on another flight.

The report cited MEE's past reporting on the suspected threat to Saudi dissidents in the US, but MEE in its investigations has been unable to ascertain the date of the alleged attempted rendition.

MEE has repeatedly approached the FBI about the story, but like the Daily Beast, the agency has declined to comment.

And then, on Friday, came another "exclusive"  as the Guardian reported that US intelligence officials had warned their British counterparts that Saudi Arabia planned to surveil Khashoggi's fiance, Hatice Cengiz, in the UK last year.

Citing western intelligence sources, the report says that the Americans believed that Cengiz was to be monitored in London last May, where she had moved a month before.

It was not clear, according to the report, if she was to be watched electronically or physically or if the surveillance had, in fact, occurred.

The report cites a reference made by Washington Post columnist David Ignatius in an oped in December.

In his piece, Ignatius said that the State Department had rejected a proposal by US defence contractor DynCorp to train the Saudi intelligence services. State and CIA officials, he wrote, were concerned that the kingdom had continued to pursue and surveil dissidents abroad in the wake of Khashoggi's murder.

Specifically, he mentioned that US officials were worried that the kingdom had tried to lure a young Saudi dissident in the US back to Saudi Arabia. "A US official said the FBI concluded that he would be arrested if he returned home and warned him against traveling," Ignatius wrote.

The same official, Ignatius wrote, told him that Cengiz and one of Khashoggi's sons had been under surveillance in London during the summer of 2018.

In early December, MEE twice asked the State Department press office if it could confirm Ignatius's account and specifically if it could provide more details about the alleged attempt to lure the student back to Saudi Arabia, including if that dissident had been based in California.

The State Department did not respond to MEE's emails. MEE has since filed a Freedom Of Information Act request for any internal State Department communications related to DynCorp proposals to train Saudi intelligence agencies, and asked that the request be expedited as related documents could contain information critical to public interest.