Houthi delegation arrives in Iran, which has openly supported the group, as Hadi accuses his predecessor of conspiring with Tehran A delegation of Houthi leaders has reportedly arrived in Tehran for talks as Iran’s influence in Yemen through its support of the rebel group appears to strengthen.

The arrival of the group, led by Houthi political leader Saleh al-Samad, comes days after Iran landed its first plane in 25 years in Sanaa under a new, direct flight deal between Iranian and Yemeni airlines.

The arrival of the Houthis in Tehran also comes as Yemen’s deposed president Abd-Rabbu Mansour Hadi has accused former Yemeni president Ali Abdullah Saleh of conspiring with Iran and the Houthis to take back control of Yemen, a source told Reuters this week.

"Hadi said that this alliance between Saleh and the Houthis, in coordination with Iran, was behind the fall of Sanaa on 21 September to the Houthi militias," the source who heard Hadi talk to the leaders told Reuters.

"The historic city (Sanaa) has become an occupied capital," the source said.

Hadi also told tribal leaders, political party heads and other figures in Aden, where he has set up after fleeing Sanaa last month, that Saleh had sent a paliarmentary delegation to Iran to coordinate efforts for this purpose, Reuter's source said.

Last November, the UN Security Council accused Saleh, the former leader, of working with the Houthis to destabilise Yemen and imposed sanctions on him and two Houthi leaders.

Meanwhile, reports have emerged that his son, Ahmed Ali Abdullah, the Yemeni ambassador to the UAE, has been the point man for back channel meetings between the Houthis and various others including the Iranians and the Saudis.

The Iranians have been open about their support of the rebel group, which took control of the capital Sanaa in September and has steadily continued to gain a foothold in the country ever since.

In October, Ali Akbar Velyati, one of Ayatollah Khamenei’s loyal lieutenants and a former foreign minister, said he hoped the Houthis would play the same role in Yemen as Hezbollah does in Lebanon, according to the Iranian News Agency.

Zakani also said that Iran considered the Yemeni revolution to be an extension of its own and that the Houthi takeover of Yemeni provinces would continue into Saudi Arabia – which has also thrown its support behind the Houthis early on.

However, while the Iranians appear to have supported the Houthis to expand their regional sphere of influence, the Saudis reportedly backed the group as push back against the Islamist group al-Islah – a move that MEE's Editor David Hearst has described as a ‘crapshoot’ given the close proximity of the Houthis now to the Saudi border.

The United Arab Emirates, an ally of Saudi Arabia, have also been involved in the background, providing funding and planning resources to the Houthis since 2012, MEE reported. 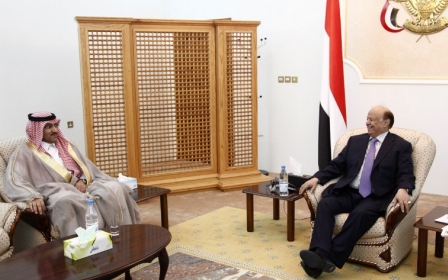 Inside Yemen
Kuwait reopens Yemen embassy in Aden, instead of Sanaa