Houthi leader vows to continue fight despite 'setbacks' in north A speech by Houthi leader Abdul-Malik al-Houthi is screened as Yemeni Muslims, including some Houthi supporters, take part in a rally on the eve of the anniversary of the birth of Islam's Prophet Mohammed, known in Arabic as 'al-Mawlid al-Nabawi' at a football stadium in the Yemeni capital, Sanaa, on 23 December 2015 (AFP)
By
Saeed Al-Batati
AL-MUKALLA, Yemen - The leader of the rebel Houthi movement in Yemen on Wednesday defiantly said that he would continue fighting against military operations carried out by government forces and the Saudi-led coalition despite suffering setbacks in some northern provinces, including Sanaa.
"I call upon all free people from all walks of life to go on with their serious and responsible moves to confront the invaders and aggressors, incite people to back the strategic choices and liberate each occupied inch of the country,” said Abdul-Malik al-Houthi in a message aired to a huge gathering in the capital to celebrate the Prophet Mohammed's birthday.
He admitted that his forces had lost control over some areas in the provinces of Mareb and Jawf in northern Yemen.
"There are some setbacks in Jawf and Mareb due to slackness and the buying off loyalties, but I would like to assure all the free people that the inevitable result will be victory,” al-Houthi said.
He also criticised the recent UN-brokered talks in Geneva, urging his followers to turn their backs on any UN efforts and continue fighting. He accused the UN of being dictated by the United States.
“The UN is carrying out its role and duty in accordance with the US policies. Even during the latest talks, the US ambassador called the UN envoy [Ismail Ould Cheikh Ahmed] to ask him to halt the talks. So he ended the talks.”
Al-Houthi also repeated his claims about the role of Israel and the US in the war in Yemen, saying that the recent rocket attack in Bab al-Mandab region that killed two senior military officers from the Saudi-led coalition also killed some Israelis and foreign mercenaries.
The young leader and his movement made massive gains last year when his fighters stormed key government agencies in the Yemeni capital of Sanaa and expanded their leverage into other provinces.
The Houthis, who hail from the northern province of Saada, have been drawn into a civil war against forces loyal to President Abd Rabbuh Mansour Hadi and a military coalition of Arab countries led by Saudi Arabia.
Gains
After a month of deadlock in northern Yemen, government army troops and allied militiamen have recently taken the offensive to the province of Sanaa and Jawf.
The forces first made their way deeply into the province of Jawf taking control of Hazem city and many other regions. In Sanaa province, Abdul-Kareem Thouaeel, a spokesperson for Sanaa Resistance, told Middle East Eye on Wednesday that pro-government forces are now 50 km from Sanaa airport.
"The government forces and the resistance have taken control of Salab mountain in Nehim [in Sanaa province]. The fighting is in Faradhat Nehim, a small mountainous region in the north-eastern side of the capital.”
The government-controlled national TV station on Wednesday aired an interview with brigadier Hashem al-Ahmer, a powerful military and tribal leader who fled the country after the Houthis took control of the capital.
Al-Ahmar claimed that the forces of Brigade 141, which he commands, are now advancing on Sanaa. 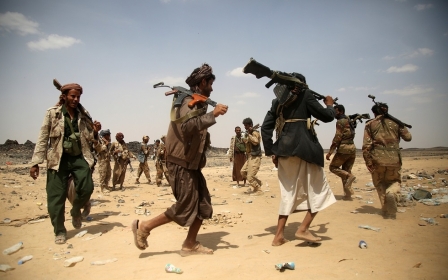 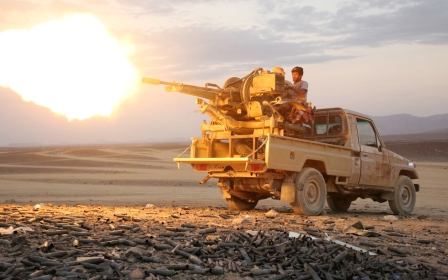