A rebel ambush in Yemen killed dozens of Sudanese soldiers belonging to a Saudi-led coalition fighting on the side of the government, military sources and the rebels said on Saturday.

The Iran-backed Houthi rebels hit the Sudanese military convoy in the northern province of Hajjah before dawn on Friday, according to military sources.

The losses were reported to be the heaviest suffered by Sudanese troops in Yemen since they were deployed in the war-torn country in 2015.

"The Sudanese soldiers were lured into a trap by the rebels" who allowed them to advance into areas where they were waiting to attack them, a Yemeni military officer told AFP on condition of anonymity.

The Houthis reported the attack on their Al-Masirah website, saying dozens of Sudanese soldiers had been killed and armoured vehicles destroyed.

There was no immediate comment from Sudan, which has deployed hundreds of soldiers as part of the coalition that Khartoum joined in 2015 after breaking decades-old ties with Tehran.

On Thursday, Yemeni military officials said hundreds of soldiers from Saudi Arabia and Sudan had arrived in the northwest to reinforce troops deployed around rebel stronghold Saada.

President Abd Rabbuh Mansour Hadi's government was driven from Yemen's capital after the Houthis overran the city in 2014, sweeping southwards from their northern bastion.

The coalition, led by Saudi Arabia, has since struggled to close in on rebel strongholds.

Almost 10,000 people have been killed since the coalition joined the Yemen war in 2015, triggering what the United Nations has called the world's worst humanitarian crisis.

The Houthis have launched a string of ballistic missile attacks on neighbouring Saudi Arabia from northern Yemen.

The rebels say the missile attacks are retaliation for Saudi-led air raids.

Both the coalition and the United States - a key ally of Saudi Arabia - have accused Iran of arming the Houthi rebels.

The Sudanese military has largely refrained from offering details of its operations within the coalition against the Houthis.

In a rare announcement in April 2017, the army said that five of its troops had been killed while fighting for the coalition.

In January 2016 the army had said it had lost one soldier in Yemen. 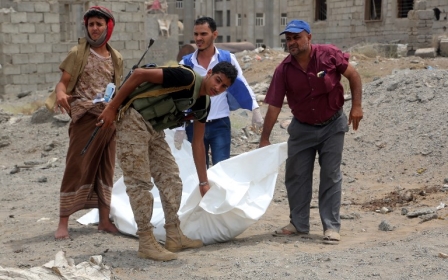