Popular Resistance claims 12 violations in first hour, as commanders say they do not recognise truce while city remains under siege 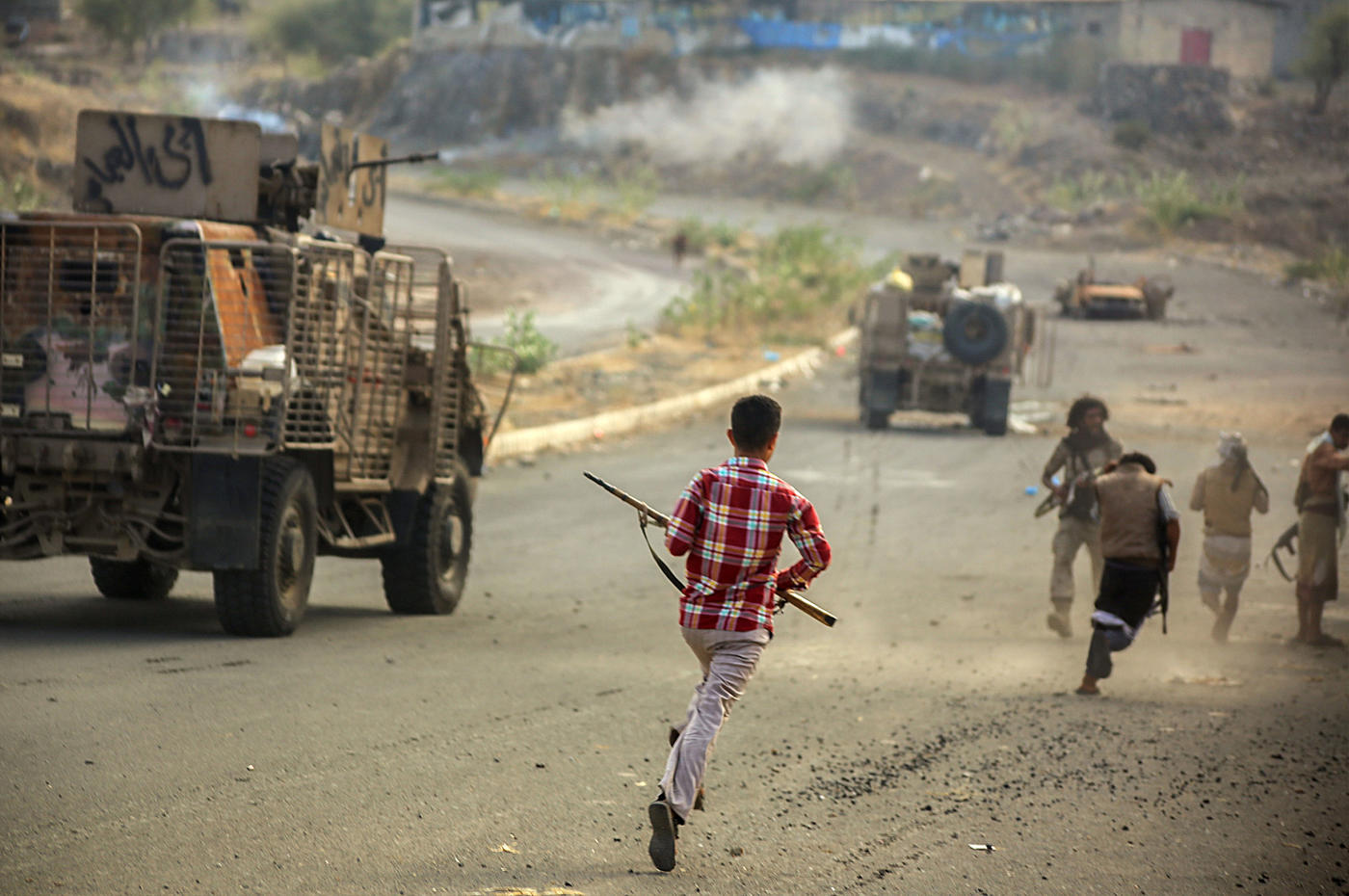 TAIZ, Yemen - A much-vaunted Yemeni ceasefire appeared to falter in its first hours in Taiz, with clashes ongoing and the Popular Resistance accusing the Houthi rebels of 12 violations in the first hour.

The resistance's the military council on Monday said that Houthis were advancing on several fronts in the province, and Houthi shelling of civilian areas was continuing.

Reports said at least four children had been injured in the shelling.

"A medical source told Saba news agency that the Houthis shelling killed two civilians and injured ten others, including children and women and two fighters of the popular resistance have been killed and six injured in Taiz city," according to a report by Saba state news agency.

Moaath al-Yaseri, a leader of the Popular Resistance in Taiz, told Middle East Eye that resistance forces responded with defensive fire but did not attack the Houthis.

"According to the agreement of the ceasefire, we can reply to the fire, but we cannot attack, but the Houthis did not abide by the ceasefire agreement, and they continue to target both the civilians and the resistance," Yaseri said.

He pointed out that the Houthis advanced in al-Dhabab and al-Rabie fronts, while the clashes were still ongoing on several fronts. "We can say that Taiz is not part of the peace process," he added.

A ceasefire came into force at midnight local time on Monday between forces backing the Saudi-backed president, Abd Rabbuh Hadi, and their enemies, the Houthis and forces still supporting the ex-president Abdulluh Ali Saleh.

It specifies a week of "confidence building" measures before planned peace talks in Kuwait starting on 18 April.

The Hadi government accused Houthis of using heavy artillery within moments of the start of the truce, while the Houthis were reported by Reuters as saying Saudi coalition jets staged three strikes on the city.

The Houthis have not commented on allegations they had broken the ceasefire.

A statement from the Saaleek brigade, which is part of the Popular Resistance, said it was not part of the agreement and would not accept dialogue with the "enemy" if the Houthis continued their siege of Taiz.

"The brigade participated in the war of Taiz from the beginning and they will not stop fighting until the liberation of Taiz, and we will fight to win either victory or martyrdom," it said.

Nabil al-Adimi, a Saaleek commander, told MEE on Sunday: "We will leave the dialogue and politics to the parties and the [Saudi-backed government] that disappointed Taiz, but we are fighting over our religion, ground and honour."

Farouq al-Hamadi, a resident of Taiz city, does not believe in the peace process, accusing both of the Houthis and the Popular Resistance of destroying his city and killing civilians.

"Saaleek brigade announced that they will not abide by the ceasefire, and the Houthis usually do not abide by ceasefires, so both are responsible of the violation."

Hamadi, who lives in the Beer Bash area west of the city, said he heard fierce clashes in the southwestern front overnight.

"I cannot trust in the Houthis or the resistance to save me, I can only pray for God to take them out of Taiz, as both of them cannot understand the peaceful language," Hamadi added.

His words were echoed by others spoken to on Monday.

Mohamed Abdulwadood, a resident of the Thawra area of Taiz city, said that he could only believe in the peace process once the siege was lifted.

"We will be stupid if we believe in the peace talks while we live under the siege," he said. "The first step before the talks has to be breaking the siege, and then the ceasefire, and then peace talks."

Saudi-led air strikes also targeted the Houthis in al-Salal Hill, east of the city, which the Houthis were firing on.

The ceasefire appeared to be holding elsewhere in Yemen, according to several news agency reports.

General Mohamed Ali al-Makdashi, the chief of staff for Hadi's forces, said: "The truce has not collapsed and we hope the rebels end their attacks and respect the ceasefire."

The UN special envoy for Yemen, Ismail Ould Cheikh Ahmed, welcomed the ceasefire, calling it "a first step in Yemen's return to peace".

"This is critical, urgent and much needed. Yemen cannot afford the loss of more lives," the Mauritanian diplomat said.