AQAP seizure of army camp raises questions about US strategy in Yemen without diplomats, apparent allies on the ground The Houthi militia in Yemen has criticised a decision by the US and others to close their embassies in the strife-ridden country following the Shiite movement’s seizure of power earlier this week.

Italy was the latest country to close its embassy on Thursday, following the US, UK and France’s moves earlier in the week.

The assurances of the militia come as al-Qaeda in the Arabian Peninsula (AQAP) has reportedly seized an army camp in southern Yemen on Thursday in the town of Baihan in the central Shabwa province.

At least seven people were killed in the fighting that followed the capture of the 19th Infantry Brigade - a seizure that will likely be met in the US with concern after reports earlier this month that Washington is no longer able to track $400m worth of weapons and equipment it has given Yemen since 2006.

The escalating violence prompted UN Secretary General Ban Ki-moon to warn on Thursday that unless drastic action aimed at "preventing civil war in Yemen" was taken, all out strife could soon break out.

"Let me be clear: Yemen is collapsing before our eyes. We cannot stand by and watch," Ban told the 15 member council.

He went on to call for President Abedrabbo Mansour Hadi and his prime minister to be "granted freedom of movement" following the power grab by the Shiite militia known as the Huthis which has left them under de facto house arrest.

"Today, Yemen is at a crossroad: either the country will descend into civil war and disintegration, or the country will find a way to put the transition back on track," Benomar told the council by video link from Sanaa.

AQAP has frequently been referred to as the most dangerous wing of the al-Qaeda franchise and the US has been involved in an intensive counter-terrorism campaign in Yemen to wipe out the group.

Iran also confirmed on Wednesday that it has been helping to "combat terrorism" in Yemen.

President Rouhani told a rally in Tehran celebrating the 36th anniversary of the 1979 Islamic Revolution that Yemen had been "helping the people" of Yemen and supporting "peace and stability" there, though he did not give details as to what form that support had taken.

Although the Shiites Houthis are opponents of and seen as a counter force against against AQAP, their seizure of power and territory – including army bases - has raised fears of a potential power vacuum in which AQAP could thrive.

"It is exactly this scenario that worries US officials: a collapsing Yemen, a growing al-Qaeda and no allies on the ground," Gregory Johnsen wrote in BuzzFeed last Friday.

Despite the US embassy evacuations, officials have been keen to emphasise it would not been a let up in counter-terror operations.

"There continue to be Department of Defense personnel ... on the ground in Yemen that are coordinating with their counterparts," said White House spokesman Josh Earnest on Wednesday

He said they were carrying out "the counterterrorism actions that are necessary to protect the American people and our interests around the world".

Houthi officials, however, said the closures were a ploy to put “pressure” on the people of Yemen.

"The decisions of some Western countries to close their embassies in Sanaa are absolutely unjustified," said Hussein al-Ezzi, the Houthi’s head of foreign relations, told the official Saba news agency.

He said the foreign nations "will quickly realise that it is in their interests to deal positively with the will of the Yemeni people, which they must respect".
US government spokesperson Jen Psaki on Tuesday said that the possibility of renewed violence in impoverished country had prompted the withdrawal.

“Recent unilateral actions disrupted the political transition process in Yemen, creating the risk that renewed violence would threaten Yemenis and the diplomatic community in Sanaa,” she said.

Staff at the US embassy in the capital Sanaa destroyed documents and weapons in light of the Houthi takeover, AFP reported. Reuters later reported that Houthis had seized more than 30 embassy vehicles after the diplomats left.

"It was to safeguard and protect (the vehicles) because certain drivers and local (embassy) staff wanted to appropriate them," Ezzi, the foreign relation’s head, said.

"Airport authorities in Sanaa are ready to hand over the vehicles to a trustworthy third party, like the United Nations office."

Last week, the Houthis dissolved Yemen’s parliament and declared a "presidential council" after the president, Abedrabbo Mansour Hadi, resigned last month saying he was no longer capable of governing. Inside Yemen
Protesters fill the streets on anniversary of Yemen revolution 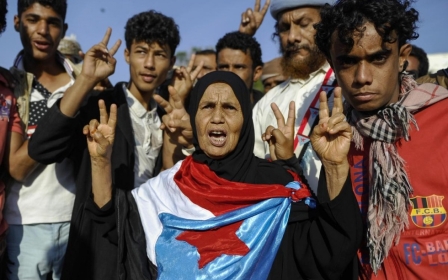