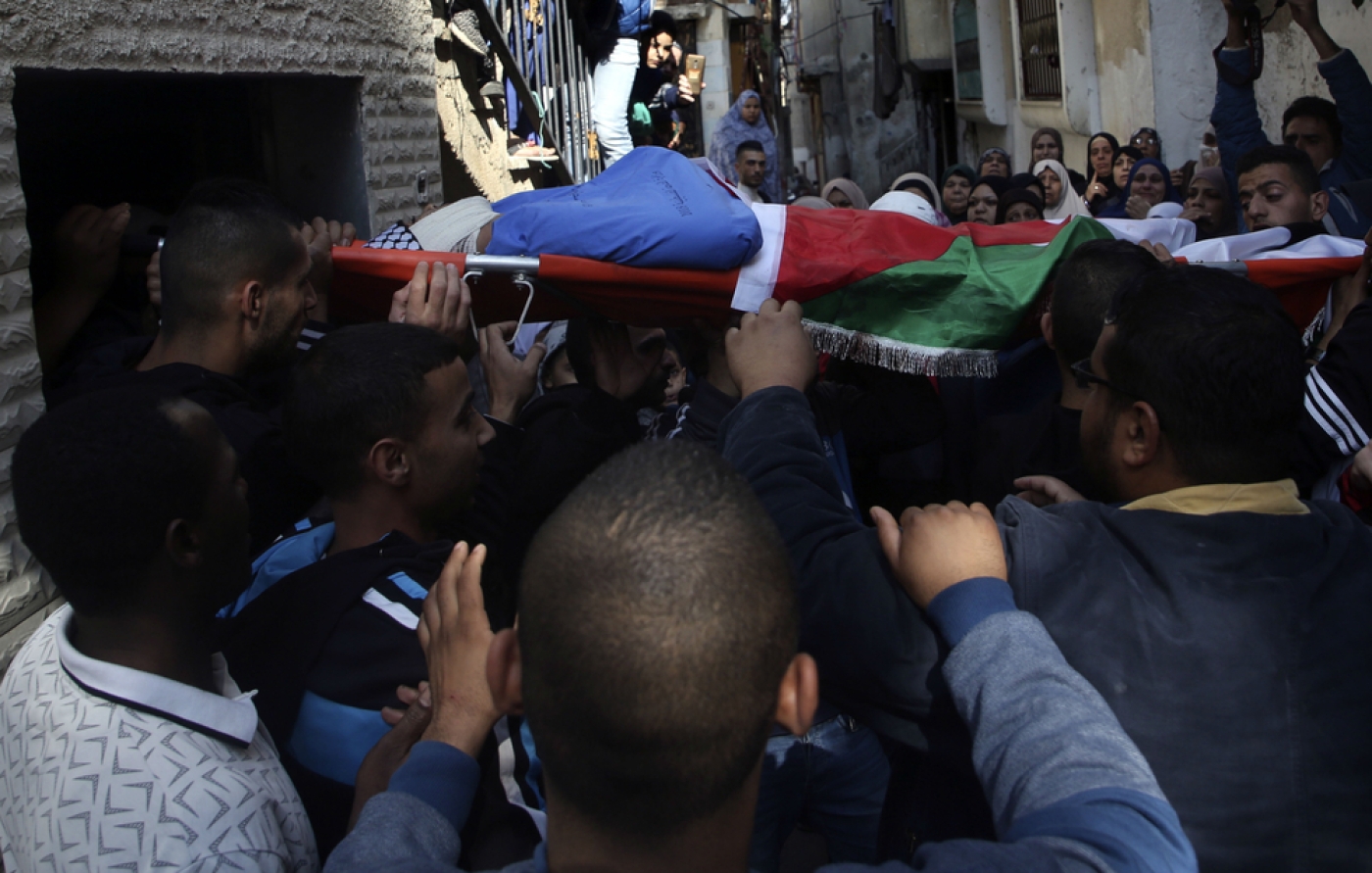 Ihbali was reportedly shot with live ammunition in the head and groin area (AFP)
By
Areeb Ullah
, Akram Al-Waara

Hundreds of Palestinians gathered for the funeral of a 22-year-old disabled Palestinian who was shot in the head by Israeli forces during an early morning raid in the West Bank city of Tulkarem on Tuesday.

Mohammed Ihbali was shot with live ammunition in the head and groin area, and was pronounced dead after he was rushed to Thabet Thabet Hospital also in Tulkarem, according to local media outlets and a family member.

He was killed when Israeli forces raided his neighbourhood and, in response, young Palestinians reportedly defended their homes.

Ihbali's older brother, Alaa Hussam Ihbali, told Middle East Eye that Mohammed was leaving work at a local coffee shop in the Khoudouri area when he crossed a street where Israeli forces and local Palestinians were clashing.

"His back was towards the soldiers. He was walking away from them and from the clash area," Ihbali said. Footage from a surveillance camera shared on social media after the incident appears to confirm Ihbali's account.

An Israeli army spokesperson told MEE that soldiers were conducting an operation in the city "during which a violent riot was instigated and dozens of Palestinians hurled rocks at the IDF troops".

"Troops responded with riot dispersal means and later on with live fire," he added, declining to comment specifically on what happened to Ihbali

Ihbali, who family members said had difficulty speaking, lived with seven brothers and sisters in the Tulkarem refugee camp. Alaa said his brother was "simple and quiet".

"He's really lovely, always helping people, not the type to get involved in problems," he said.

Videos posted online on Tuesday showed mourners trailing behind Ihbali as he was carried through the city's narrow streets on Tuesday afternoon before funeral prayers.

Israeli army forces frequently raid homes in all areas of the West Bank, despite the fact that Area A - which includes Tulkarem - and Area B are nominally under the political control of the Palestinian Authority (PA).

Under the Oslo Accords that paved the way for the creation of the PA - a political entity intended to usher in the creation of an independent Palestinian state - the West Bank was divided into Areas A, B and C.

Area A represents 18 percent of the territory, officially under full PA political and security control.

In practice, however, the Israeli army often carries out raids in all parts of the West Bank, and the PA has maintained its security cooperation with Israel despite the scores of Palestinians killed at the hands of Israeli troops.

Laith Abu Zeyad, a campaigner for Amnesty International, told MEE that Palestinians killed during Israeli arrest raids "is nothing new".

The "disproportionate presence of military and police" inside the West Bank during Israeli arrest raids "is likely to continue unless this cycle of impunity is broken," he said.

"Israeli forces for decades have repeatedly violated their obligations under international law by responding to stone-throwing protests by using excessive force, including live fire against protesters, causing unlawful and unnecessary deaths and injuries," Zeyad told MEE.

"The Israeli authorities must hold those found responsible for these grave violations to account through fair trials. If this does not happen, we will not see an end to Israeli forces’ random and senseless killing of Palestinians."

According to the UN Office for Coordination of Humanitarian Affairs, Israeli forces have killed 27 Palestinians in the West Bank in 2018, not including Ihbali.

The UN had also noted that Israeli forces also injured more than 5,000 Palestinians in the West Bank.