From political showboating to fears of repeat of Rabaa massacre, Egyptians see reflection of their own politics in failed Turkish coup Egyptian protesters cheer on 3 July 2013, the day Morsi was toppled by the military (AFP)
By
MEE correspondent

CAIRO - When Shereen heard that a coup attempt was underway in Turkey, her heart rate jumped.

“I almost cried,” said the Egyptian housewife and longtime Muslim Brotherhood supporter. “I remembered the same moment, with the same scenario here.”

Shereen, who declined to use her last name for security reasons, stayed up all night watching the news on television.

“My husband told me not to worry,” she said. “What happened here won’t happen there.”

Across town Shaima Sabry, another housewife who shares mutual friends with Shereen, watched a completely different event unfold: This was a "show” that Turkish President Recep Tayyip Erdogan had put on “to get revenge and more power”.

Sabry, who supports the government of Egyptian President Abdel Fattah al-Sisi, said she was “upset with the way Erdogan and the people treated their military”.

As the coup attempt in Turkey last Friday grabbed the world’s attention, the news hit close to home in Egypt as many, like Shereen and Shaima, saw reflections of politics in their own country in recent years, and their reactions mirror a public that is still deeply divided.

“There is the pro-regime lobby that saw the [Turkish coup] as a victory for the Egyptian regime itself,” said Ziad Akl, a political sociologist and senior researcher at the Egyptian Studies Unit in Al-Ahram Center for Political and Strategic Studies.

There is also, Akl said, the anti-government lobby, which is composed of different political forces including the Muslim Brotherhood who “think that [the failure of the coup is] a triumph for legitimacy”.

For them, says Akl, Erdogan's post-coup actions exemplify "how a coup should be dealt with".

Though the international media had confirmed the failure of the coup in Turkey by the early morning hours of 16 July, headlines in public and private Egyptian newspapers told citizens that the attempt to seize power in Turkey had actually succeeded.

Controversial talk show host Ahmed Mousa insisted that what took place in Turkey was not a “coup at all,” but a “revolution from inside the Turkish military forces”.

He told viewers that, in Turkey’s “revolutions… the Turkish military always wins”.

Another host on the al-Balad channel said that the Turkish citizens who took to the streets in opposition to the coup “look like ISIS”.

On an official level, however, Egypt blocked a UN Security Council statement that condemned the unrest in Turkey and called on all parties to "respect the democratically elected government of Turkey,” Reuters reported.

The Egyptian Foreign Ministry said after the incident that they were only opposed to “the wording” of the statement.

The Turkish Foreign Ministry responded: “It is only natural for those who gained power through a coup to avoid taking a stance against the coup attempt that targeted our democratically elected President and Government.”

For many Egyptians, the events in Turkey were like a chance to relive the events of 3 July 2013, which saw a popular-backed coup oust democratically elected president Mohammed Morsi - but now with the benefit of hindsight.

Shereen, the Cairo housewife who supports the Muslim Brotherhood, said that watching the Turkish coup attempt made it clear to her that the power of the people is “the most important thing”.

She was one of the millions who took to the streets to protest the 3 July coup in Egypt and who, like her friends, lost loved ones when Egyptian security forces violently dispersed the Rabaa and Nahda sit-ins staged in support of the Muslim Brotherhood in August 2013, killing at least 904 protesters.

“In Turkey, Erdogan had the support of a large faction of the military, the police, the television channels - and the opposition parties stood with him,” she said.

“Here, it was the opposite. We had a really weak alternative media. The police, their families, and a lot of people who believed what was happening took to the streets on 30 June,” she said in reference to a day of mass protests against Morsi's rule.

But for Mohamed el-Raai, an independent photojournalist based in Cairo, the coup attempt in Turkey did not make him think too much of Egypt, “because there are a lot of differences between the incident there and the incident here”.

Still, he said, the way the Egyptian media covered the event “was naïve and backwards - we’ve gotten used to expecting this from them. They insist on scaring us with more arbitrariness, lies, and ignorance."

Raai also said that the support opposition parties gave Erdogan against the coup was “a great response”.

“They put the nation’s interests, freedom and democracy above their personal disagreements with the ruling group in Turkey,” he said.

“It’s not about Erdogan as a person, but about the ideals of democracy.”

Hatem Ali, a doctor and a political activist, said the first thing that came to his mind as he followed the Twitter feeds of Turkish activists were ”the drawbacks that this coup will bring to the Syrian refugees and to Syria”.

It also, he said, brought memories back of the 2013 coup in Egypt, leaving him wondering if a scenario similar to that of Rabaa Square might follow.

“I kept thinking: How many innocent people will die for this? How many of Erdogan’s supporters will have to die?” he said.

“But in the end, there can't be a comparison between Egypt and Turkey,” Ali said. “Turkey did not have a [Mohamed al-]Baradei or politicians who said we should get rid of the elected government first, then see how we can deal with the army, as was done in Egypt.”

“The difference,” he said, “is that mainstream people in Turkey, whether they support Erdogan or not, are more conscious and oriented with political life than all the Egyptian ‘politicians’ who now express regret for their participation in overthrowing the Muslim Brotherhood.”

Egyptians who fled to Turkey after the crackdown in their homeland also said they had a heartfelt scare last Friday.

Salma Ashraf, an Egyptian human rights worker now based in Turkey, said she initially did not understand what was going on. But when she realised a military coup was underway, she was in “utter shock”.

“It reminded me of when the military in Egypt kept Morsi in secret detention. When Erdogan appeared on FaceTime, I was sure that it was a coup because the exact same things happened with Morsi,” she said.

“[Erdogan’s] calls to the people to take to the streets reminded me of Egypt and, in my mind, I kept saying ‘not again’. I imagined another sit-in, and another Rabaa. My mind just could not take it.”

Ashraf, who was at Rabaa Square in August 2013, said the Turkish coup attempt was scarier for her than Rabaa because it was only later, after the events in the square, that she realised what she had been through. When the events in Turkey began, though, she “quickly felt fear”.

“I kept imagining and remembering everything what I [had] experienced before,” she said.

“People in the streets, helicopters killing them, blood on the streets, protesters shot dead next to us and the whole massacre then: another Egypt, now.”

Ashraf said her brothers, also living in exile in Turkey, admired how quickly the Turkish people reacted to the coup, and that they had had joined anti-coup protesters in the streets.

Ashraf said she was relieved when the coup failed, and her fears that she might be deported began to abate.

But she is watching events closely.

This article was written by an Egyptian journalist who writes anonymously for security. 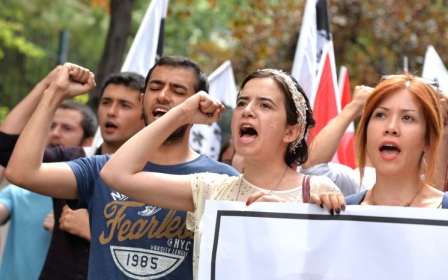