'I'll kill myself before going back': Migrants in Greece vow to fight on 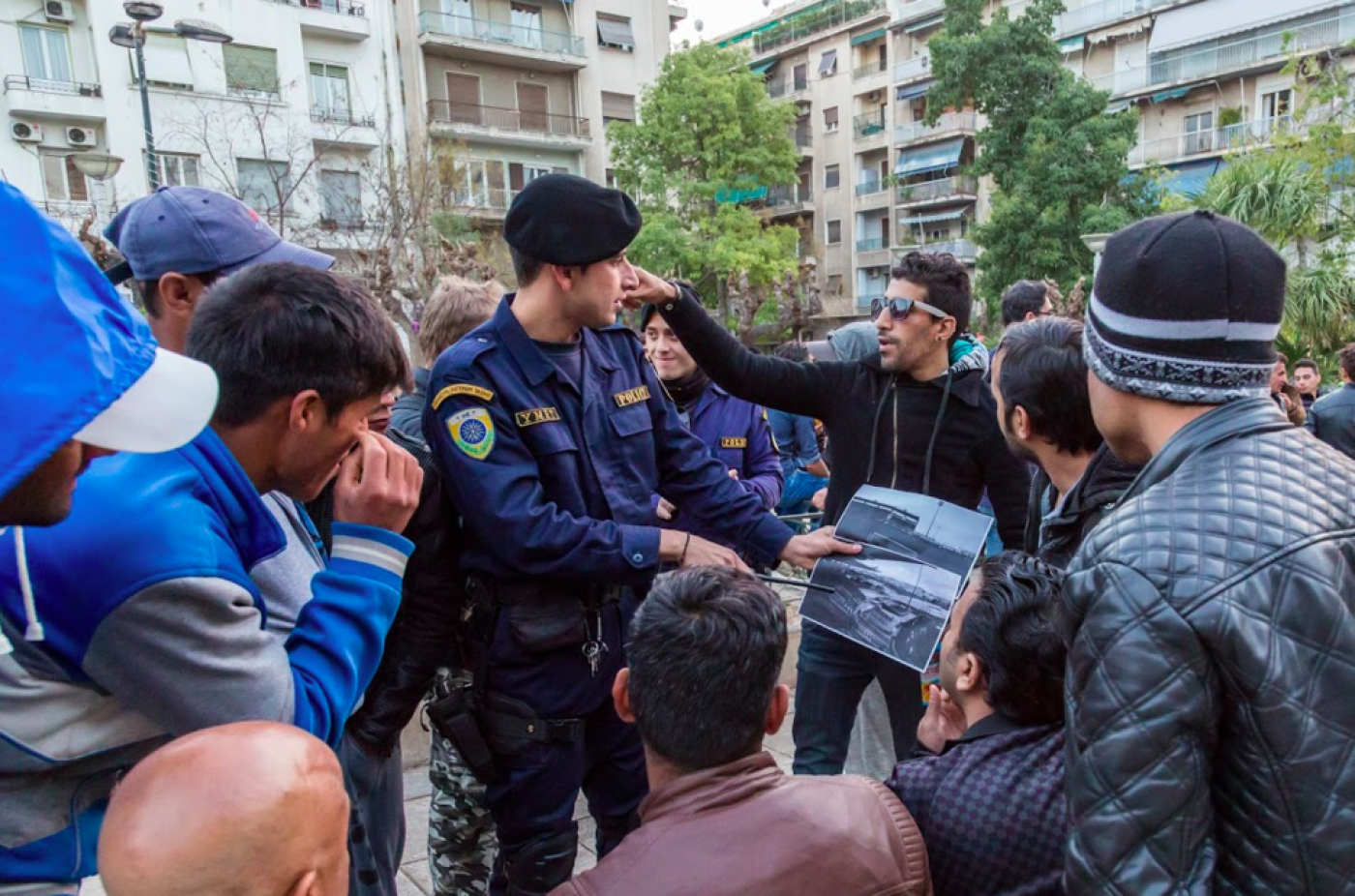 Migrants and refugees in Athens' Victoria Square speak with police, who have started making them move on (MEE/Will Horner)
By
Will Horner

ATHENS, Greece - In Victoria Square, the central Athens park that has become a de facto refugee camp, Mourad Hassin, a 25-year-old migrant from Tunisia, says he has a plan to make it to England despite the string of border closures that have largely sealed shut the Western Balkan migrant route.

While in Turkey, he got his hands on a fake ID that he hopes will be his ticket to a brighter future abroad.

The fake ID card bears, along with his image, all the necessary information and markings one would expect an ID card to have: date of birth, expiration date, ID number and signature - all listed in French and English.

But the flimsy plastic and cheap looking micro-chip give it away immediately. Mourad explained that throughout the five months he has been languishing in Victoria Square, he has tried six times to leave through Greece’s northern border with Macedonia - and each time he has failed.

Despite this, Mourad has complete confidence that the card will work, and that he will be able to leave Greece and start afresh in Europe. Like so many others who have found themselves trapped, he said he will keep trying no matter what and that going back is simply not an option.

Even an expected deal between the EU and Turkey intended to send back migrants and refugees - thereby undermining smuggling routes - set to be signed this week, will not lead him to return, he said.

No papers and no money

Victoria Square was once home to a mixture of refugees and migrants who came from as far afield as Pakistan and Iran in the east to Morocco in the west to sub-Saharan Africa in the south. Some, like those from Morocco and Tunisia, largely came for economic reasons, frustrated by poor job prospects and corruption at home, and hoping to find a better life abroad.

Others, however, were pushed to Europe because of war and violence that has ravaged Syria, Iraq and Afghanistan.

At first, the refugees and economic migrants found themselves literally in the same boat, forced to pay smugglers thousands of dollars to get to Europe. Both migrants and refugees largely tried to avoid getting registered by authorities in Greece out of fear it would damn their chances of seeking asylum or finding work in places like Germany.

But as the refugee and migrant influx intensified last summer, the registration system collapsed and hundreds of thousands of people flooded north.

The situation didn’t last long though, and soon border restrictions, especially for those deemed economic migrants and not refugees, were put up. In recent weeks, the stringent border regulations in the Balkans have become even tighter, trapping tens of thousands of people in Greece.

For a while a trickle of Syrians and Iraqis were being allowed in each day, but last week the Macedonian border was fully closed. The only option for these refugees and migrants is now to cross illegally into Macedonia through the mountains that lie along its border with Greece.

On Monday, hundreds of people were stopped by Macedonian troops after they tried to cross a surging river to avoid the border. AFP reported that they were found perilously clinging to a rope strung between the banks to cross north into Macedonia. Two people drowned and the rest were quickly returned to Greece.

Authorities are by no means the only risk. According to the majority who have attempted this route, armed criminal gangs prey on migrants and rob them at gunpoint.

“They put a gun to my head and took all my money,” said Ibrahim Mahmoud, also from Tunisia. “They are a mafia, they rob refugees.”

Having already spent the bulk of their savings on smugglers and exhausting the rest while waiting for the chance to sneak into Europe, these kinds of attacks come as a devastating blow to people who have already lost so much.

Twenty-five-year-old Mohamed Hlibi from Morocco tried several times to cross the border into Macedonia. On his latest attempt, he decided to try a route through the mountains but he too was robbed by an armed gang who threatened to kill him.

Things have gotten so bad that Mourad and his friends have been discussing the possibility of giving up on the Macedonian border altogether, and instead travelling to Patras, the Greek port town on the western coast, and taking a ferry to Bari, Italy.

Few of those trapped in Athens have yet exploited this route, but with time now running out for Mourad and others it seems inevitable that soon many of them will.

With a stark line being drawn between those deemed migrants and refugees, and certain nationalities being given priority, many vulnerable people feel they are being left to fall through the cracks.

“In Libya there are big problems, no money, no jobs and now Daesh (the Islamic State group),” says Tufail Shugair, who fled Libya’s second city of Benghazi that fell to militants two years ago and has seen fierce fighting since.

“[On Lesbos] they did not give me papers because I don’t have anything, no passport. When we went to the border they wouldn’t let us in, only Syrians. So we went through the mountains. In Macedonia the police took my money and took us back to Greece.”

Once back in Greece and without money, the majority of refugees and migrants return to the only place they can consider home: Victoria Square.

“Now I sleep in a side-street,” said Tufail. “The police don’t let us sleep in [Victoria] Square anymore.”

‘What else do I have to lose?’

In response to the crisis, the UNHCR has called for the EU to step up its promise to resettle those trapped in Greece, saying that resettlement will “reduce demand for people smuggling, onward movements, and dangerous boat journeys”.

“Safe access to asylum, shelter and basic assistance, and treating people with dignity and respect must remain essential elements of the response.”

The EU however has said it will begin deporting migrants back to Turkey and in return begin resettling Syrian refugees currently in Turkish camps in Europe.

Speaking after his meeting with Turkish Prime Minister Ahment Davutoglu, President of the European Council Donald Tusk said: “The most promising method seems to be a fast and large-scale mechanism to ship back irregular migrants arriving in Greece. It would effectively break the business model of the smugglers.”

But for the determined refugees and migrants in Victoria Square, who have already spent so much effort and money, it is difficult to see how shipping them back to Turkey will “break the business model of the smugglers”.

Many said that no matter what the authorities do, they will keep trying, and that repeatedly risking their lives for a better future in Europe is preferable to going back home or being left behind.

At the end of February, two refugees attempted to commit suicide by hanging themselves from the trees that line the edge of Victoria Square. Worryingly, Mourad said he too would sooner consider suicide than return to Tunisia.

“I will kill myself in front of a car or from a tree – it doesn’t matter, but I can never go back,” he said. Blink News
BLiNK: Banned from France and held under terror law for delivering aid to refugees