Thousands of refugee woman and children in Greece are waiting to be reunited with their families across Europe, says the UN 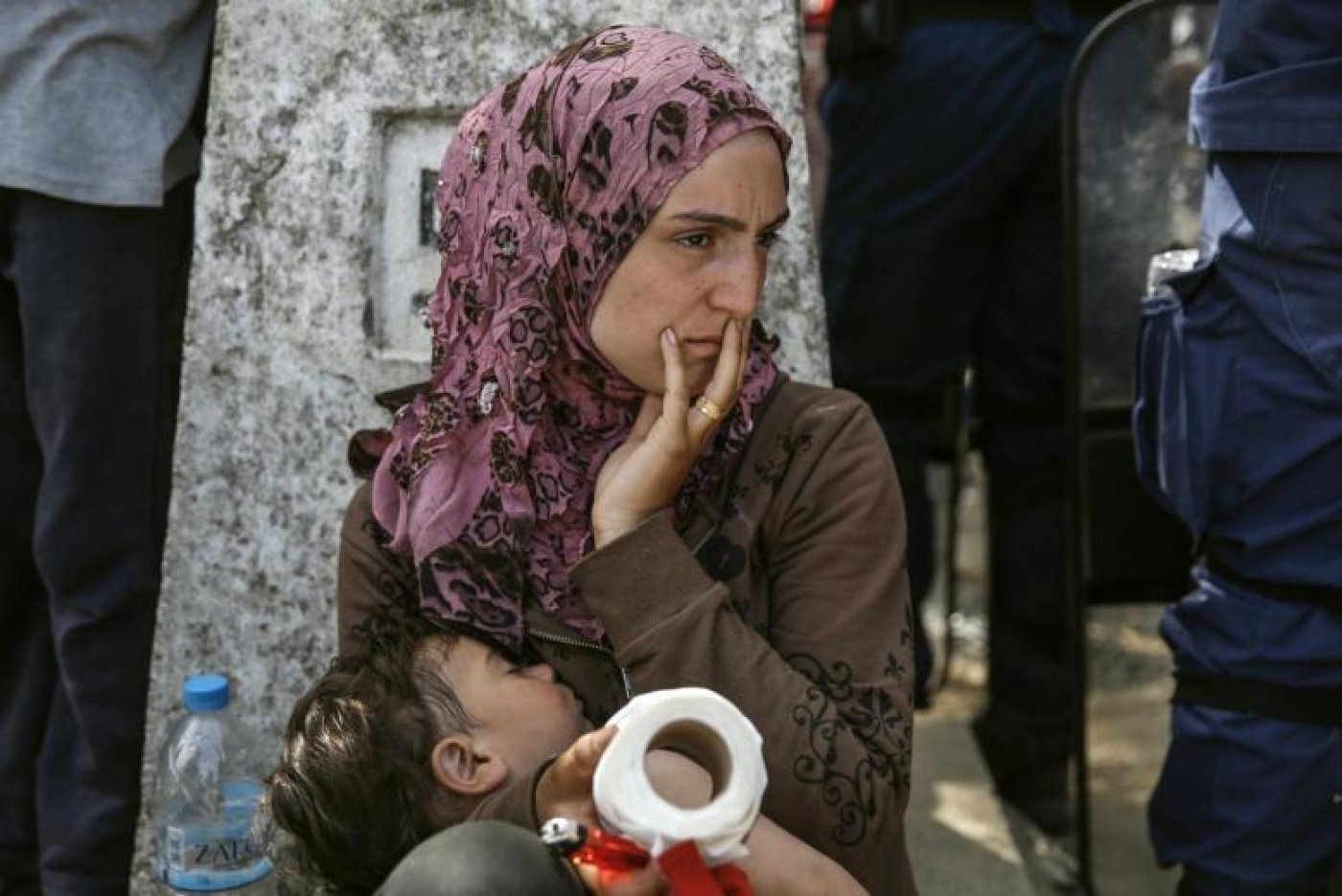 A mother sits with her child near a makeshift camp near the village of Idomeni, Greece (Reuters)
By
Arwa Ibrahim

THESSALONIKI, Greece - They left war zones in hope of finding a better future for their children, but life for young refugee mothers in Greece is far from what they had expected.

"I thought I'd find peace and security here but I'm counting the days until I leave," 23-year-old Syrian refugee Ayah told MEE.

Ayah left Aleppo for Turkey with her husband, months-old son Yusuf and now five-year-old daughter Hayam in 2014. She lived in Turkey for two years before making her way across the Mediterranean into Greece.

"My life in Syria was beautiful but after my uncle was killed in front of our eyes and my sister-in-law was shot dead by a sniper, I knew, that for the sake of my kids, we had to leave."

According to Ayah staying any longer in Aleppo would have possibly led to her husband being imprisoned or killed as well.

"My husband is wanted by the regime to fight along the Assad forces and because he's Kurd, he's also wanted by the PKK [Kurdistan Workers' Party fighting the Islamic State]. If they came for him and he resisted, it would have been the end."

To make it to Greece, Ayah and her family were smuggled through the Turkish borders and across the Mediterranean where they nearly all drowned in a flimsy boat carrying 60 other people.

"I tried to resist getting on that boat, but one of the smugglers punched me in the face and forced me to get in," Ayah recounted. "I wonder how we made it alive."

'Living in a prison'

About 60,000 refugees, mostly Syrians, Afghans and Iraqis, have been stuck in Greece for over a year after border closures in the Balkans halted the onward journey many planned to take to central and western Europe.

More than a quarter are children and over half of the new arrivals have been women and children, according to UN data.

Ayah now lives with her family at a warehouse converted into a refugee camp where tens of migrant families live on the outskirt of the Greek city of Thessaloniki.

'We are living in a prison and our companions are scorpions, mosquitoes, and snakes'

With the help of several international NGOs, the Greek authorities built rooms using partitions to shelter some of the millions of refugees coming to Greece at the peak of the migrant crisis in 2015.

But conditions inside the camp have been increasingly difficult for Ayah and her children.

"We are living in a prison and our companions are scorpions, mosquitoes, and snakes," said Ayah.

"We have to tolerate unbearable heat and whenever we complain [to the NGOs running the camp] we are just brushed aside."

For Ayah, the worst thing is not knowing how long she and her children will have to wait until they know when and where they are going next.

According to the UN, thousands of refugee woman and children are living in limbo in Greece, waiting for the day they will be reunited with their families in other European countries.

"Every day I ask about our papers but they [the NGOs] just tell me to wait," said Ayah who hopes to join her brother in the Netherlands and one day become a professional chef cooking traditional Syrian dishes.

"In the meantime, the children wander about the camp with nowhere safe to play and no school to attend."

Ayah points towards a bucket she had filled with water for her children to splash around in with their friends at the camp.

Like Ayah, Zainab, a 20-year-old mother of two from Baghdad, hoped to resume a normal life in Greece with her children.

But she lives in fear of being denied entry into Germany, where she hopes to be reunited with her parents and siblings, who left Iraq a couple of years ago.

"I don't know when I'll leave and if I'll be able to able to join my family," she told MEE.

"It just scares me to think that after enduring so much I might be left alone with my two kids."

Family reunification can take between 10 months and two years, says the UN children's fund UNICEF, making life particularly hard for those left behind.

The uncertainty caused "significant psychological distress and anxiety for children and their families, setting them back for years to come," said UNICEF's regional director, Afshan Khan.

For Zainab, who fled both a war zone and an abusive relationship, leaving Iraq was her only hope for a better future for her children.

"I left Iraq for the sake of my children - my daughter specifically," she said.

Her experience of leaving school in fifth grade and marrying at only 14 has made her adamant to give her daughter the opportunities she did not have.

"I hope to some day see her in college on her way to becoming an independent and educated young woman," she said of her five-year-old daughter, Hayam.

UNICEF says refugees and migrants stranded in Greece, Bulgaria, Hungary and the western Balkans are at risk of "psychological distress" caused by existing in a prolonged state of transit.

For 21-year-old Marwa, a Syrian refugee who left Idlib four months ago with her three-year-old daughter Rima and 18-month-old son Ibrahim, coming to Greece has not helped her overcome the horrors she experienced back home.

"I've not had any psychological treatment since I arrived," said Marwa, who now lives with her husband and children at a Greek refugee camp until they are relocated to independent housing in Greece or elsewhere.

She says that when a helicopter or plane flies above the camp, her daughter Rima runs in fear as she is reminded of the war zone they fled.

"When I put my head on the pillow to sleep, I still see dead people," Marwa told MEE as she recounted walking "over limbs of dead people" to try and get out from under the rubble of a bombed-out market where she and her children were trapped following an air strike.

"I don't want my children to relive these moments or see what they saw again."

As well as the experience of the civil war in Syria, Marwa's psychological distress was heightened by her trip across the Mediterranean from Turkey to Greece.

According to Marwa, after seven failed attempts, smugglers helped her climb over a three-metre-high separation wall on the Turkish-Syrian borders with her two children before they managed to eventually get them to the Greek island of Chios where her husband was waiting.

Marwa recalled that the most difficult part of the trip was getting past the Turkish patrol as they tried to stop their boat of around 50 migrants from crossing into Greek waters.

Under the EU migrant deal agreed with Turkey on 18 March 2016, migrants arriving in Greece are expected to be sent back to Turkey if they do not apply for asylum.

She said it was not until the smugglers agreed to return seven young men to the Turkish side that their boat was allowed to continue into Greek waters.

"It was so scary. I knew we might drown but I had to try to reunite my children with their father."

Despite the difficulties she has faced, Marwa hopes that one day she will live a normal life with her young family.

"I dream of having a home where my children can grow surrounded by peace."