Iran has arrested a British-Iranian on suspicion of links to the UK intelligence service, the Tehran prosecutor told Iranian media on Tuesday.

"The accused, who was arrested in Tehran last week, was active in the field of the Iranian economy, and was linked to the British espionage service," the Mizan news agency quoted Abbas Jafari Dolatabadi as saying.

He did not give the name or gender of the accused.

The British foreign office said it was seeking information about the reported arrest.

Dolatabadi recalled warnings by Supreme Leader Ayatollah Ali Khamenei that Western governments would seek to "infiltrate" the country in the wake of last year's nuclear deal.

Iran does not recognise dual nationality and treats those arrested as Iranian citizens only.

Three other dual-nationals arrested over the past year - American, British and Canadian - are currently awaiting trial.

All three of them are believed to have been arrested by the Iranian Revolutionary Guard, with their families and legal representatives saying they did nothing wrong, Al Jazeera reported.

Hoodfar, a retired professor who taught at Concordia University in Montreal, was arrested on 6 June and is being held incommunicado in Tehran’s notorious Evin prison. The Canadian government has said that it has made her case a "top priority".

Zaghari-Ratcliffe, 37, was about to return home to the UK on 3 April before she was detained by the Iranian Revolutionary Guard and separated from her 22-month-old daughter. She works for the charitable arm of the Thompson Reuters media organisation.

Her husband told British media in May that she was being held in solitary confinement over supposed "national security" issues.

An Iranian justice department official said in June that Zaghari-Ratcliffe had been involved in protests against the re-election of Mahmoud Ahmadinejad in the country in 2009.

Namazi, whose father is also currently being held in the country, was arrested in October and held incommunicado in Erin Prison. His mother said that he had gone on hunger strike in February. 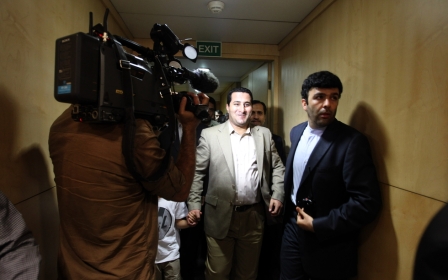