'Rapid-response' drills, the fifth to take place this month, come just hours after US flew a B-52 bomber to region Iran will stage military exercises near the Gulf of Oman early this week, in the latest show of force against the US as Joe Biden prepares to enter the White House.

"The main purpose of the war game is to evaluate the mobility and offence power of the rapid reaction brigades and corps and the mobile offence units of the army ground forces," Heidari said. The military show of force comes in the final hours of Donald Trump's presidency, and just a day before Biden assumes office.

The Democrat, who analysts say will pursue a drastically different foreign policy from his predecessor, has pledged to return to the Iran nuclear deal if the Islamic Republic commits to "strict compliance".

The multilateral pact, formally known as the Joint Comprehensive Plan of Action (JCPOA), saw Iran scale back its nuclear programme in exchange for lifting sanctions against its economy.

In May 2018, Trump withdrew Washington from the agreement, and since then, has been piling sanctions on Iranian industries and individuals as part of his administration's maximum pressure campaign.

In September, Biden wrote an opinion piece for CNN where he called the Trump administration's Iran policy a "dangerous failure", adding he would reach out to Tehran and offer "a credible path back to diplomacy".

Tensions have risen sharply between the US and Iran in recent months following the assassination of Iranian nuclear scientist Mohsen Fakhrizadeh.

Iranian President Hassan Rouhani accused Israel, a US ally in the region, of killing the scientist and vowed "strong retaliation".

Since the start of this month, the Islamic Republic has conducted at least four military drills in its waters. Meanwhile, the US has redeployed an aircraft carrier to the region and flown B-52 bombers over the Arabian Gulf - the latest of which came on Sunday. When asked about the flight exercises, the chief of staff of Iran's armed forces, Mohammad Hossein Baqeri, dismissed the mission as having "no operational value".

Iranian Foreign Minister Mohammad Javad Zarif also condemned the B-52 mission, saying if the move was an attempt to intimidate Tehran, then the US would be better off spending its military billions on "taxpayers' health."

"While we have not started a war in over 200 years, we don’t shy from crushing aggressors," Zarif said on Twitter.

In an attempt to make it difficult for Biden to return to the nuclear deal, the Trump administration has also begun targeting Iran and its allies with counterterrorism designations which are harder to reverse.

Last week, Secretary of State Mike Pompeo notified Congress that he intended to designate the Iran-aligned Houthi movement in Yemen as a foreign terrorist organisation (FTO), and made the bold claim that al-Qaeda established a "new home base" in Iran without providing any evidence. 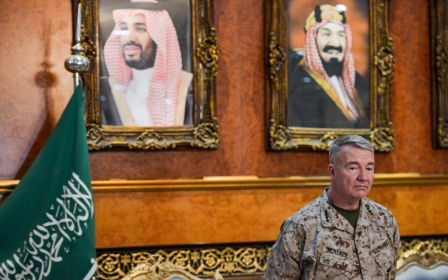