Meanwhile, Raisi's attendance at UN causes anger, and he is accused of hijab double standards, and electricity exports resume to Turkey 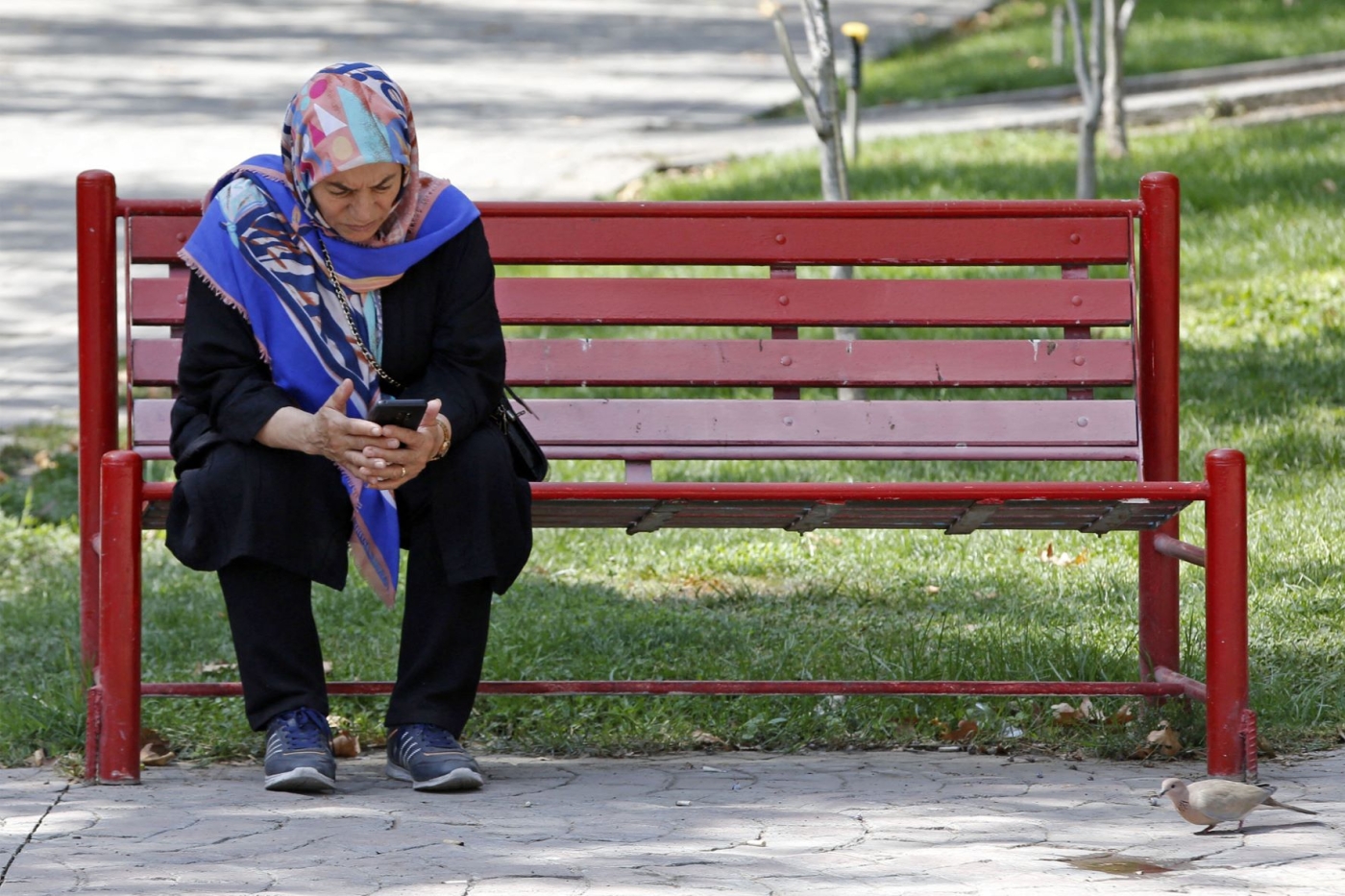 A woman checks her phone in a park in Iran's capital, Tehran, 27 September 2022 (AFP)
By
MEE correspondent

Iran's minister of communications and information technology has responded to reporters who asked about the United States government activating the satellite internet service Starlink.

"Don't take it seriously," Issa Zarepour said. "They should obey the country's laws if they want to provide their service to Iran. However, it's doubtful that Starlink satellite would be activated in Iran any time soon," he was quoted as saying by local media.

Last week, the US Treasury Department issued a self-executing licence permitting Starlink to provide free internet to Iranians, who have faced a nationwide internet shutdown since the beginning of recent demonstrations.

In response to a tweet by the US secretary of state about the new licence, SpaceX CEO Elon Musk tweeted: "Activating Starlink …".

However, experts have said that Iranians would not be able to use Starlink internet because no one in the country has access to the Starlink terminal, which is necessary to receive the company's internet signal.

Despite technical difficulties in receiving Starlink signals, Nour News, a website affiliated with Iran's Supreme National Security Council, accused the US of violating Iran's sovereignty by giving the green light to Starlink to provide free internet to Iranians.

"US meddling in Iran's internal affairs would definitely be responded [to]," Nour News reported.

Farsi social media users have accused President Ebrahim Raisi's administration of double standards over hijab, after he cancelled an interview with the CNN journalist Christiane Amanpour in New York because she was not wearing a headscarf.

Following the cancellation of that interview and as anti-hijab protests in Iran continued, Farsi social media users posted a photo of Russian foreign ministry spokeswoman Maria Zakharova during her official visit to Iran in July.

On Twitter, Iranian journalist Sara Massoumi compared Zakharova's outfit with Amanpour's clothes when Raisi refused to speak with her. "In defining the definition of the Islamic hijab, does the head of the government, Ebrahim Raisi, consider a difference between a Russian spokeswoman in the building of the Foreign Ministry of Iran and Christiane Amanpour in the United States? Which one is more covered?" Massoumi asked.

However, some social media users suggested that Amanpour's lack of a headscarf was just an excuse for Raisi not to speak with her.

"I believe the hijab was just a justification to escape from a challenging interview," wrote a Twitter user in response to Massoumi's post.

Other users shared the same photo of Zakharova inside Iran's foreign ministry building in Tehran, standing below a picture of assassinated military commander Qassem Soleimani, drawing a relationship between that and the death of Mahsa Amini in the custody of "morality police".

Ordinary Iranians took to Farsi social media to express their anger over President Raisi's presence in the US and his address to the 77th session of the United Nations General Assembly, as anti-government protests continued in Iran.

During his speech to the UN General Assembly, Raisi held up a photo of Qassem Soleimani, which caused anger among Iranians back home. Many Iranians have accused western powers of hypocrisy for letting Raisi enter the US and give a speech at the UN. 'No one is safe': As UN debates spyware threats, rights groups say ban it
Read More »

"I've been thinking how Raisi was permitted to hold up a photo of Soleimani as he spoke at the UN…Then I remembered he himself was under [US] sanctions, but he made it to New York. Do you still seek help from the US and Europe?…their governments have no problem going to bed with the Islamic Republic [of Iran]," an Iranian user wrote on Twitter.

Other Iranians criticised Raisi for talking of international justice at the UN while his government suppressed demonstrations at home.

"This was an executioner's support for another executioner when Raisi held up Soleimani's photo in the UN," wrote another Iranian Twitter user.

Meanwhile, a video went viral on Farsi social media showing an enormous banner of Soleimani being torn apart and set on fire during a recent anti-government protest. The users claimed that the incident happened in the city of Kerman, where Soleimani was born.

Iran to export electricity to Turkey

Tehran has tested the required facilities to export electricity to Ankara, despite US sanctions, Mehr News agency reported.

The agency quoted Iran's energy minister, Ali Akbar Mehrabian, as saying that with Turkey's investment the necessary facilities were built in Van, a city in eastern Turkey, to import electricity from Iran.

"The installation and testing of this facility were based on [previous] agreements between the two countries, and very soon Iran will benefit from this market," Mehr News quoted Mehrabian as saying.

However, he did not elaborate on how Turkey would pay for the imported electricity. US sanctions have banned any money transfer to and from Iran through international banking systems.

Tehran and Ankara have faced several disputes over electricity exports in recent years. The latest happened in 2016, when Iran halted the exports after Turkey's failure to pay a $200m debt to Tehran.