Esmail Qaani replaced Qassem Soleimani, the Iranian military commander who was killed by US missile strike at Baghdad airport (AFP/File photo)
By
MEE and agencies

An Iranian news agency on Saturday reported a visit by the chief of the elite Quds Force to eastern Syria, a rare public announcement of a trip to the battlefield by the successor of a commander killed by the United States in January.

Esmail Qaani is the replacement for Qassem Soleimani, Iran's most powerful military commander, who directed its allied militia in conflicts across the Middle East before he was killed by a US missile strike at Baghdad airport. Iran's semi-official Tasnim news agency reported Qaani had visited Abu Kamal, a Syrian town on the border with Iraq, in the past few days. It later deleted the report without explanation, Reuters said. Other Iranian news media made no mention of the visit.

Tasnim quoted Qaani as describing Islamic State (IS) group fighters as agents of Israel and the United States, a common accusation by Iran.

Israel has regularly struck what it says are positions of Iran and its allies inside Syria. On Tuesday, the Syrian army said it responded to Israeli strikes on southern, central and eastern Syria in which two soldiers were killed.

The Quds Force under Soleimani was instrumental in directing militia that fought on behalf of Syrian President Bashar al-Assad throughout the nine-year Syrian war.

Iran's Quds Force is part of the 125,000-strong Revolutionary Guard that has been successful in building loyal proxy forces throughout the Middle East.

Soleimani's killing led to a peak in confrontation between Iran and the United States.

Tehran retaliated with a rocket attack on an Iraqi air base where US forces were stationed. Hours later, Iranian forces on high alert mistakenly shot down a Ukrainian passenger airliner taking off from Tehran.

On Saturday, Iranian media also said the bodies of two Revolutionary Guard members killed in Syria four years ago were repatriated after being recently found and identified. 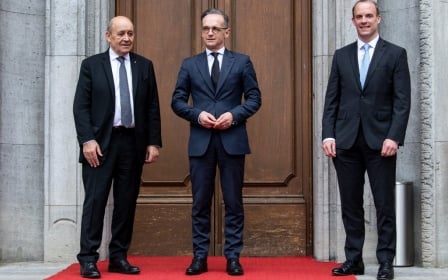