Meanwhile, Iran's conservatives have a 10-year plan for power and air pollution is killing over 30,000 a year 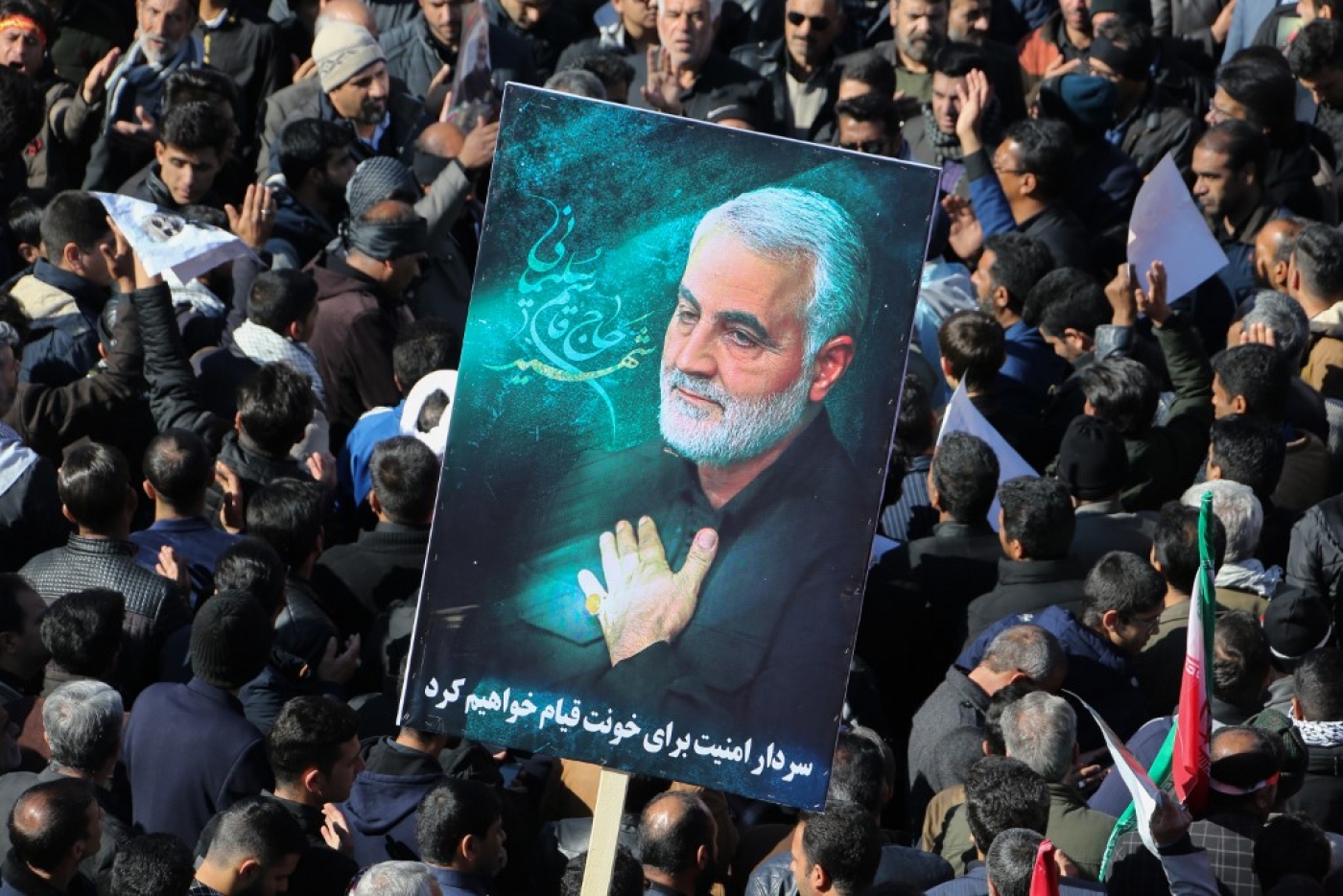 Since the assassination of Soleimani, who Qanni succeeded, in Baghdad on 3 January, 2020, Iran has regularly vowed to avenge his death (AFP)
By
MEE correspondent

Soleimani's killers should 'learn to live like Salman Rushdie'

Brigadier General Esmail Qaani, the commander of the Islamic Revolutionary Guard Corps’ (IRGC) Quds force, has said that those responsible for the killing of Iranian general Qassem Soleimani should learn to live secretly like the British Indian writer Salman Rushdie.

Rushdie has been living under police protection since 1989, after Iran’s first Supreme Leader Ayatollah Ruhollah Khomeini issued a fatwa against him, giving permission to his followers to kill Rushdie because of his book The Satanic Verses. The conservative Kayhan daily reported that in a meeting with Iranian lawmakers, Qanni said that Iran’s revenge for the assassination of Soleimani was yet to come, and that he had suggested that “all those responsible in the terror of Soleimani would be better of learning to live secretly like Salaman Rushdie”.

A Twitter account affiliated to Qaani’s supporters, which publishes his comments and news about his activities, also quoted him as saying: “We warn the US president, the head of the CIA, the defence minister, the secretary of state and all other American officials who played a role in the terror of the martyr Soleimani that they would be better learn the secretive lifestyle that Salman Rushdie has."

Since the assassination of Soleimani, who Qanni succeeded, in Baghdad last January, Iran has regularly vowed to avenge his death.

Officials in Tehran have said such revenge will come true when all US troops are expelled from the region.

“You cut our warrior’s hands, and [in response] we will cut your legs from this region,” Iran’s official news agency IRNA quoted President Hassan Rouhani as saying in a ceremony on Sunday marking the first anniversary of Soleimani’s death.

Conservative plot for next decade revealed

After months of speculation about Iranian conservatives’ plan to support the presidency of an IRGC commander in June's presidential elections, the Aftab daily has said that such a move would be the first part of a power grab aimed at dismissing reformists from Iran’s establishment over the next decade.

Since the 1997 victory in presidential elections of reformist Mohammad Khatami, political power has been shared between reformists and conservatives in Iran. However, following Rouhani’s failure to remove international sanctions against Iran, conservatives and the IRGC have come together in a bid to claim total political power.

Eslami, who is relatively unknown in Iran’s political arena, is also an IRGC commander who leads the the Guard's commercial and financial organisation Katam al-Anbiya Construction Headquarters.

According to Aftab, in this year's city council elections, conservatives will only support candidates who will vote for Eslami to become Tehran’s mayor.

By getting Eslami elected as mayor, conservatives would push out reformists from another important political institution, while at the same time introducing Eslami to Iranians as a pragmatic manager, the same strategy that was used to bring Ahmadinejad to power, Aftab said.

Conservatives are confident that they will have an easy victory in June’s presidential elections, since the reformists have lost much of their support in society as a result of the two years of maximum pressure that Trump’s administration has exerted on Iran.

If the conservatives win the upcoming presidential elections, they will control the three main pillars of political power in Iran, namely the parliament, presidential office and judicial system.

Tens of thousands die of air pollution every year

As air pollution shrouds Iran's largest cities, the health ministry has said the problem accounts for more than 33,000 deaths in the country every year.

However, the Iran daily, the government’s official newspaper, has put the number at 40,000. By comparison, in the UK, between 28,000 and 36,000 deaths a year are attributed to long term exposure to air pollution. In the US, the figure is thought to be around 200,000.

Tehran, Isfahan, Mashhad, Tabriz, Karaj, Urmia and Qom were the cities that faced heavy air pollution since mid-December, according to the most recent figures. In winter, a climate inversion phenomenon worsens the air pollution problem in the cities, as cold weather near the ground traps pollution in the atmosphere.

Last week, all governmental offices in Isfahan were closed for two days due to air pollution and health officials advised people with heart problems and respiratory diseases to stay at home.

Meanwhile, officials in Tehran have banned outdoor sports, shut down cement and sand factories, and urged the elderly, children and pregnant women not to leave their houses, with the average level of PM2.5 particles over 150 for the past two weeks.

The World Health Organisation's advised maximum level of PM2.5 particles is 50, while local media reported that since March only during 15 days has the level been below 50 in the capital.

Health professionals have warned the growing level of air pollution will result in an increase in the numbers of people infected by Covid-19 in Iran.

Iran is the country hardest hit by the pandemic in the region, according to official figures.