Iran talks: Six days of living in a gilded cage

With Iran nuclear talks still ongoing, diplomats begin to complain they are in a 'Wes Anderson movie' As prisons go, the famed Beau-Rivage hotel nestled on the Swiss side of Lake Geneva with breathtaking views over the snow-capped French Alps must count as one of the world's most luxurious.

But after six days and nights of living within the confines of its magnificent 19th century frescos and marbled columns, even top diplomats were beginning to go a bit stir crazy as they seek to hammer out a historic framework deal with Iran.

"Don't you guys have a life?" top US diplomat John Kerry joked with journalists who mobbed him as he left a dinner in one of the hotel's top-class restaurants late Monday with his French and German counterparts.

But he swiftly corrected himself, saying reporters had a "better life" than the negotiators.

Not only have they been debating, arguing, discussing, dining and even breakfasting together, but it has been virtually impossible to leave the hotel without being chased by camera crews from the world's media desperate for a snippet of information.

Despite the cold, rainy weather, Kerry did manage to take at least one of his famous bike rides during a break in negotiations, and slipped in to join a birthday party at a nearby bar.

And a video of Chinese Foreign Minister Wang Yi jogging along the banks of the lake caused a storm on social networks in China, where the private lives of politicians are rarely reported on.

Opened in 1861, the Beau-Rivage, with its 168 guest rooms including 26 junior suites and eight suites, has hosted a few historic events in its day.

And many of the 19th and 20th century's most famous personalities - Victor Hugo, Marilyn Monroe, Coco Chanel and Tina Turner to name just a few - have passed through its halls.

The former dictator of Zaire, Mobutu Sese Seko, spent several months in the hotel in 1996, reportedly running up a bill of $m, before he left, fleeing into exile in Morocco where he died the following year.

Managing the safety of top delegations from seven countries has posed a logistical and security headache for the Swiss authorities.

During these closed-doors negotiations, a system of coloured badges has ensured that reporters have had little access into the heart of the hotel, roped in a gilded cage of a sumptuous ballroom resplendent with chandeliers.

Even journalists staying in the hotel were barred from their rooms at times, and had to negotiate past guards on every floor.

For the delegations who have led the intense talks - and the media who have followed them since 2013 - it has become a familiar scene.

Kerry and Iranian Foreign Minister Mohammad Javad have criss-crossed the globe in their hunt for a deal which would pare back Iran's nuclear programme in exchange of an easing of crippling global sanctions.

But their journeys have always led them back to Europe - and most regularly to Switzerland, which has jealously guarded its neutrality down the centuries.

The cachet of agreeing a landmark nuclear deal on Swiss territory is not lost on the delegations - notably the Iranians who have been left diplomatically isolated by their escalating nuclear programme.

Unconfirmed rumours have circulated for days that if anything is agreed, all the delegations could make the hour-long drive to Geneva to announce it within the solemn halls of the UN's Palais des Nations.

That was the home of the League of Nations, created in 1920 in the wake of World War 1 as the first international body whose mission was to maintain peace through collective security and disarmament.

With the talks nearing the witching hour Tuesday, many in Lausanne were beginning to tire of living in such close proximity and the feverish speculation.

"I feel like I'm in a Wes Anderson movie," one American reporter said, referring to the director behind such films as the Oscar-winning Grand Budapest Hotel. 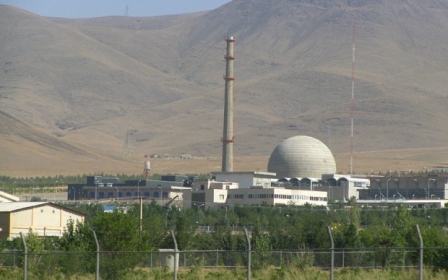