A supporter of Sheikh Isa Qassim protests outside his home in Duraz, west of Manama (AFP)
By
MEE and agencies

A leading Iranian general has warned Bahrain that its decision to strip the Gulf state's Shia spiritual leader of his citizenship will fan armed rebellion in the Shia-majority kingdom.

"Surely they know that the aggression against Ayatollah Sheikh Isa Qassim is a red line... that will leave no option for the people but to resort to armed resistance," Suleimani told state media late on Monday.

Bahrain's rulers "will pay the price and it will have no result but the destruction of this bloodthirsty regime," he added.

It was a rare public pronouncement from Suleimani. As Iran has stepped up its military involvement in neighbouring Iraq and in Syria, he has adopted an increasingly high profile, but still rarely speaks out on policy issues.

But it denies Manama's accusations that it has incited violence in the kingdom.

The Bahraini interior ministry alluded to the accusations in its statement announcing the decision against the Shia spiritual leader on Monday.

Sheikh Qassim abused his position to "serve foreign interests and promote... sectarianism and violence," it said.

Al-Wefaq was the largest faction in parliament before its members quit in protest at the 2011 crackdown.

Iran's foreign ministry criticised the "extrajudicial" measures by Bahrain that "dash hopes of reform through dialogue and peaceful overtures".

It urged Bahrain's rulers to "avoid destroying all the bridges of contact with the people and moderate leaders" by "accepting the realities of the country and holding serious national dialogue".

Washington too strongly criticised the decision by Bahrain, a close ally which hosts the US Fifth Fleet.

"We are alarmed by the government of Bahrain's decision to revoke the citizenship of prominent Shia cleric Sheikh Isa Qassim," State Department spokesman John Kirby said.

"We remain deeply troubled by the government of Bahrain's practice of withdrawing the nationality of its citizens arbitrarily."

On Monday night, there were reports from activists that people had slept in the street outside Qassim's home in the Duraz village after thousands of Bahrainis reportedly took to the streets of the tiny Gulf kingdom.

Protesters on Monday shouted "down with Hamad" - a crime punishable by prison - as they marched outside the home in Duraz of Isa Ahmed Qassim, the spiritual leader of the al-Wefaq political movement.

"Isa Ahmed Qassim has been stripped of his Bahraini citizenship," the Bahrain News Agency reported on Monday, citing the Interior Ministry.

In photos from the scene, numerous activists can be seen wearing white shawls. According to local activists, this signifies a willingness to "shed their blood" for Qassim, who was respected as the highest religious authority in Bahrain.

Last week, Bahraini authorities also detained prominent rights activist Nabeel Rajab on charges related to his criticism of the government. He is due in court on Tuesday afternoon to face two charges.

Campaigners say the recent clampdown on opposition parties and activists has seen the "darkest days" in Bahrain since the government called in Saudi troops to put down the 2011 uprising.

The protests in Bahrain and Shia-majority areas of neighbouring Saudi Arabia have exacerbated tensions between Shia Iran and Sunni-ruled Gulf Arab states, that were already running high over the conflicts in Syria and Yemen.

In January, Saudi authorities executed Shia cleric Sheikh Nimr al-Nimr, who was a prominent figure in 2011 demonstrations in the east of the kingdom that followed the protests in Bahrain. 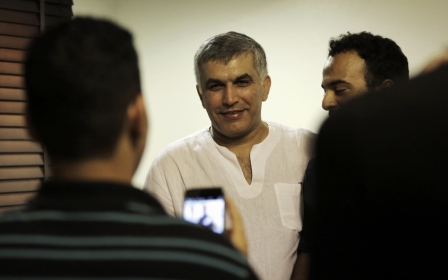