Iranian press review: If the deal's bad, why follow it, asks Rouhani

Iran's president questions US demands to stick to nuclear pact limits, while the EU's Instex gets a mixed reception in the media Rouhani: If nuclear deal so bad why does the US expect Iran to keep it?

Iranian President Hassan Rouhani on Wednesday doubled down on Iran’s decision to reduce its commitment to the 2015 nuclear deal, asking why it should abide when others don’t.

“If the nuclear agreement is a bad deal [as Donald Trump says], then what is this fuss about when Iran wants to reduce its commitment,” ISNA news agency reported Rouhani as saying.

“If the agreement is a good deal, then why can the US and European countries abandon their commitments and only Iran should meet its commitments.”

On Monday, for the first time since a nuclear agreement was inked between Iran and six world powers, Tehran exceeded the limit on the amount of enriched uranium it can possess according to the 2015 international accord.

“It is surprising that the European countries have stayed silent for the past year [since the US imposed new sanctions on Iran] while they see 82 million people of Iran facing many challenges to meet their basic needs,” Rouhani added.

According to the 2015 nuclear deal, Iran agreed to reduce its uranium stockpile by 98 percent to 300kg for 15 years in return for the lifting of international sanctions on its banking system and oil exports.

In 2018, Trump left the agreement saying “it was not a good deal” and re-imposed new sanctions on Iran.

On 30 June, Iranian dailies from across the political spectrum reacted to the launching of a European Union mechanism designed to bypass the US new sanctions that violate the 2015 nuclear deal.

While the reformists and moderates in Iran praised the EU’s new device becoming operational, the conservatives denounced the Instrument in Support of Trade Exchanges (INSTEX) as a late and insufficient move by the European signatories of the nuclear deal.

The pro-reformist Jahane Sanat daily hailed the move by the EU as a “guarantee to keep the nuclear deal” and a sign of European countries’ seriousness in reducing US pressures on Iran.

“However, there is still a large gap between what Iran expects and what the EU has done, with INSTEX a trust has been shaped which will facilitate the next moves. This shows that despite US pressures there will be more interactions between Iran and the EU in future,” the daily predicted.

On the same day, the Kayhan daily, which has close ties with Iran’s supreme leader and the camp of conservatives, on its front page warned President Hassan Rouhani: “Learn your lesson from nuclear deal, don’t be deceived by INSTEX”.

The paper urged the high-ranking politicians in the government and the president to “stay alarmed and not to be tricked by the INSTEX hollow package.”

Kayhan also found the new EU measure “insulting” because it does not provide a mechanism to buy oil from Iran and assist bank transfers between Tehran and European countries, as was outlined in the nuclear deal.

The number of Bitcoin mining sites is on the rise in Iran due to government-subsidised electricity tariffs and vague regulations on the cryptocurrency, the Iran daily reported.

Bitcoin mining is a process in which individuals can support the cryptocurrency’s global network with their own devices in return for financial reward. However, the process is expensive as it uses a significant amount of power.

Iran has not banned Bitcoin trading and the authorities consider cryptocurrencies as a means to circumvent US sanctions on its banking system. Despite that, a sharp spike in electricity consumption in late June forced the police to shut down unauthorised mining sites.

Iran daily reported that over 100 cases of unauthorised mining sites were found in different provinces by the end of June.

To find a solution to the issue and control the mining sites out of the government’s supervision, Iran’s Power Generation and Transmission Company called the Ministry of Communications and Information Technology to help them find the mining sites in the country.

On 28 June, over 1,000 mining machines were seized in the central province of Yazd, according to the Tabnak website. The machines were found in two mining sites established in abandoned factories.

Mine explosion victims wait for justice

Two years after an accident that left 43 miners dead in Zemestanyourt coal mine in northern Iran, the Aftab daily published an investigative piece about the fate of the dead’s relatives and the legal case against the officials who were responsible for the poor safety management.

The paper reported that despite President Rouhani’s promises to hold the officials accountable for the accident, no legal action has been taken against the eight mine managers who were found responsible by a report.

“Since last year, very suspiciously no news about the explosion in that mine has been released,” Aftab noted.

On 3 May 2017, a large explosion struck the coal mine and attracted enormous media attention in Iran. Though it was not the first mine accident in Iran, the large number of casualties prompted Rouhani to travel to the region and talk to the dead miners’ families.

Investigations into the accident revealed that basic safety regulations were not applied in Zemestanyourt mine in an effort to reduce expenses.

The disaster gave miners and the families of the victims a chance to discuss their unpaid healthcare and pension benefits and overdue wages. However, Aftab reported that none of these problems have been solved following the 2017 explosion. 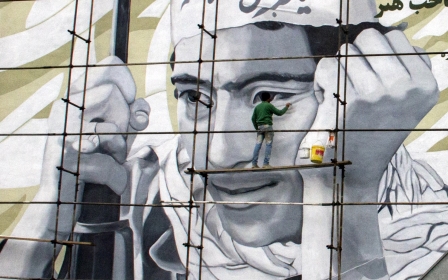 Inside Iran
In pictures: How Iran remembers its war dead