A costumer, wearing a protective mask due to the COVID-19 pandemic, has her temperature checked before entering a supermarket in the Iraqi capital Baghdad (AFP)
By
Alex MacDonald

Things looked like they were going relatively well for Iraq in the initial months of the coronavirus pandemic.

Despite being neighbours with Iran, the worst-hit country in the Middle East, there were relatively few registered infections between February and early May, a relief for those who feared Iraq's fragile healthcare system would not be able to cope with a rush of infections.

But since the end of May, as the government began to loosen restrictions, the number of cases began to skyrocket.

The latest figures released on Wednesday from the Ministry of Health show 36,702 confirmed cases - compared with just 4,000 at the end of May - with 1,330 deaths.

The registration of 2,200 new infections is the highest 24-hour increase since the beginning of the crisis. 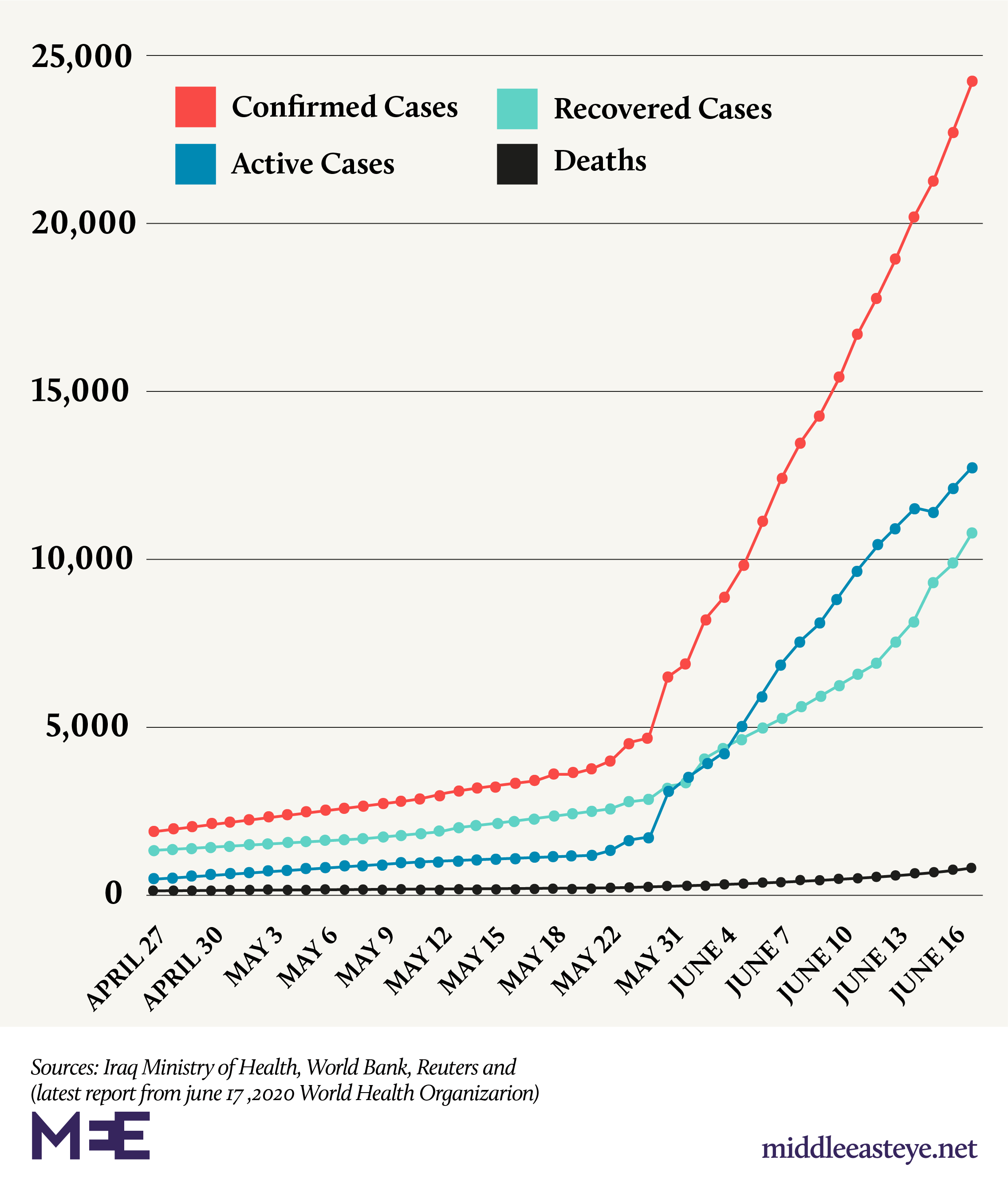 One doctor working at a hospital in Baghdad established by the health ministry to work with Covid-19, said he had seen nearly 1,000 patients suffering from the virus in the hospital.

He spoke on condition of anonymity, as a result of recent measures imposed by the ministry to prevent health workers from speaking to the media.

"The truth is the pressure is very high and the number of patients is increasing - but we are determined to overcome the ordeal," he told Middle East Eye.

'Frankly, there is no safe distance between patients due to the small size of the rooms'

He said the hospital was stretched to capacity in efforts to cope with the number of new patients.

"Frankly, there is no safe distance between patients due to the small size of the rooms," he said.

There has been no clear cause for the massive rise in Covid-19 cases, though many have pointed out that many parts of Iraq never really observed the original lockdown measures.

The number of cases seemed to rise following the end of Ramadan in late May, which also coincided with a return to the streets by anti-government protesters in Baghdad, Basra and Nasiriyah among other places.

A greater capacity for testing for coronavirus was another factor in the increase in confirmed cases.

Hussein Rasho, a doctor primarily working in the northern province of Sinjar, said that a combination of cultural norms, mistrust of the state and an informal economy based on precarious labour all contributed to undermining the restrictions.

“People say ‘we don’t have any income - if we don’t die by infection, we will die by starvation,'" he told MEE.

The lockdown has been rapidly reimposed across the country, with the government closing schools, restaurants, public gatherings and its borders.

Images released by the Alsumaria news site on Tuesday showed security forces, including soldiers, patrolling the streets of Karbala and enforcing the lockdown.

Death of an Iraqi icon

The death of much-loved former politician and Iraqi football star Ahmed Radhi - who scored Iraq's first and only World Cup goal in 1986 - on Sunday brought home the ability of the virus to reach even the upper echelons of the country.

Rasho pointed out that Radhi, who was 56 years old, had been kept in poor facilities, despite his status.

“I think the number of deaths in Iraq will be crazy.”

Iraq has not been a beacon of economic stability in recent years, but the collapse in oil prices has helped to exacerbate the country's troubles.

The economy is already projected to shrink by around 10 percent this year, putting strain on the resources available to handle the outbreak.

According to data released by the Ministry of Health and other government agencies, Iraq currently has 1.2 hospital beds per 1,000 people, 0.8 doctors per 1,000 people and only around 500 ventilators - 13 per million people.

A spokesperson for Doctors Without Borders (MSF) in Iraq also warned that oxygen supplies across the country were becoming depleted.

“Still there is a lack of adequate PPE for health care workers in the country - you have issues now where you have many healthcare workers becoming sick due to exposure to patients, which is putting a major stress and strain on the service," said Alex Dunne, a humanitarian affairs officer for MSF.

He added that MSF was becoming increasingly concerned about the possibility of a major outbreak in the refugee and IDP camps scattered across the country, where conditions and resources were stretched even thinner.

Hospitals have regularly complained of shortages - but the new government of Prime Minister Mustafa al-Kadhimi has so far yet to even approve a budget for 2020.

Associated Press quoted one official as saying the health ministry would need "a budget twice the size of the previous budget" to cope with the scale of the crisis.

'The government's planned austerity drive may be timely for the economy, but is untimely due to the pandemic'

But Kadhimi's current trajectory is one that aims to reduce public expenditure, with his finance minister announcing on Monday a plan to introduce "austerity measures that could last two years" in the country.

"The government's planned austerity drive may be timely for the economy, but is untimely due to the pandemic," said Ruba al-Hassani, a socio-legal academic researcher at Osgoode Hall Law School in Canada.

She pointed out that around the globe governments had largely responded to the coronavirus pandemic through large spending programmes and expansions of welfare, in order to offset the impact of lockdowns.

"Iraq, in the meantime, wants people to live in austerity during this pandemic," she said.

The World Health Organisation (WHO) has warned that the risk of a second spike in coronavirus cases is high following the lifting of lockdowns across the globe.

Many countries that have apparently successfully repressed the virus such as South Korea and Germany - as well as some that haven't such as the UK - have eased their lockdowns. But many analysts have pointed to the trajectory of the 1918-1919 Spanish flu pandemic - responsible for an estimated 50 million deaths - which first appeared in the spring of 1918 but then appeared to mutate as it surged again in the autumn, resulting in a more lethal second wave.

Some countries have already seen new Covid-19 cases develop post-lockdown, but the hope among healthcare workers and politicians is that there will be enough resources, learning and infrastructure at hand to tackle a resurgence - something that cash-strapped, war-torn Iraq is going to have difficulty with.

The Baghdad-based doctor said that there was ultimately only so much the government could do considering the economic factors.

"The truth is that the government, despite the limited capabilities, is making its best efforts to provide support and care to those affected," he said.

"It cannot control the spread of the virus in crowded and populated areas."

He added there was little point in attributing blame for the new spike in numbers, pointing out the crisis was a global one.

"Everyone bears responsibility, and this issue is not only in my country, but also in most countries of the world." 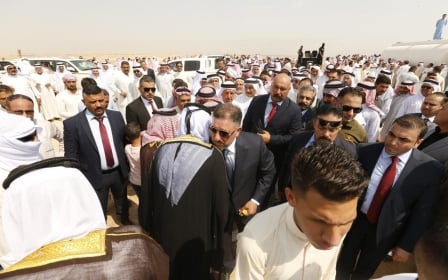 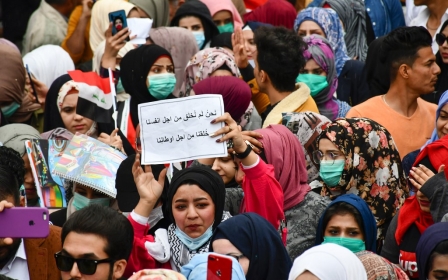