Iraq launches new push to recapture Falluja from IS BAGHDAD - Iraqi security forces, backed by Shia-dominated militias, are laying siege to the western city of Falluja in an attempt to cut off vital supply routes being used by the Islamic State, security sources and militia commanders have told MEE.

Falluja, a relatively small city west of Baghdad near the Euphrates river, is a cradle of insurgent groups and is seen by many Sunnis around the world as a symbol of the armed resistance against US troops and the Shia-dominated government in Baghdad since 2003.

Falluja was seized in late 2013 by IS militants, six months before the dramatic collapse of the Iraqi army which led to vast territories in the west and north of the country falling into the hands of the IS group's fighters, including most of Falluja's sister towns and cities of Anbar province.

For days now the city has been bombarded with artillery missiles and airstrikes. Sources inside Falluja told MEE that IS's commanders have started moving fighters into Falluja and nearby towns.

"We are looking to liberate Falluja this time not just surround it. So far, we have made good progress on the ground and our forces are stationed seven kilometers away from the city and we hope to pray the Eid al-Fitr prayers (at the end of Ramadhan) in Falluja," Mohammed al-Shimari, an artillery regiment commander linked to the Shia Badr militia, talking from southern Falluja, told MEE by phone.

"We are not involved in man-to-man combat at this point but we are facing snipers and suicide bombers," Mohammed said.

Retaking Falluja, analysts say, would be a huge victory for Iraq's government in the war against the Islamic State group.

"The situation in Falluja is unique because of the diversity of the armed factions allied with Daesh (IS), the deep family and tribal links between the militants and the people of the area, in addition to the intensified hatred for the attacking forces," Abdulwahid Tuama, an independent political analyst told MEE.

"These factors have stopped the army from making headway in this area but, if the Iraqi forces seized it, it will be the domino stone that will lead to the collapse of all the surrounding areas," Tuama, said.

Shiite militia commanders and military officers told MEE that the attacking forces are aiming to cut the supply lines between Ramadi, the capital of Anbar, Saqlawiya town and Falluja city.

The attacking troops have so far gained control over towns and villages on the banks of the Tigris River in eastern Falluja. Other troops have been moving to the north to attack al-Sijar town (northern Falluja) which represents one of the main supply lines for the city.

"Our goal is al-Sijar; if we seized it, we will entirely separate Falluja and Karma and this will suffocate Falluja and trap the militants inside it," Abu Ali al-Kaiebi, the deputy commandant of al-Rissali Brigade told MEE.

"All the supply lines of Daesh (IS) are meeting in Falluja and Karma, so if we took these two cities, Daesh would fall in Anbar and it would be easy to liberate the other towns," Kaiebi said.

The participation of local Sunni tribesmen in the battle to liberate towns and cities from IS is vital for the Iraqi government to get more international support in its war against the militants. Hundreds of anti-IS Sunni fighters are among the troops advancing on Falluja.

"The number of the Sunni fighters comparing to the others is very small and they have almost no weapons but Kalashnikovs," a prominent Sunni tribal sheikh, whose men are participating in the fighting around Falluja, told MEE.

"The commanders of the Shia militias do not trust us... tribal fighters are not allowed to spearhead the campaign. They mainly hold the liberated ground," the head of the tribe said.

US President Barack Obama called on Monday for the Iraqi government to speed up its campaign in Ramadi, the capital of Anbar province, which was seized by IS in May.

But Iraq military officers say there is little they can do if the US administration does not step up and offer more effective support in the ongoing liberation battles.

"The coalition is providing airstrikes in coordination with the Iraqi Security Forces in areas where they have requested our support," the spokesperson said. 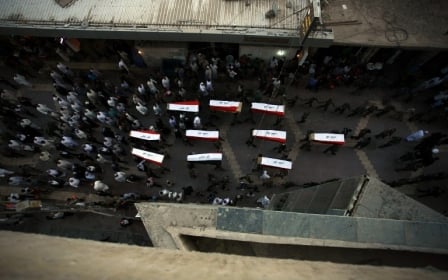