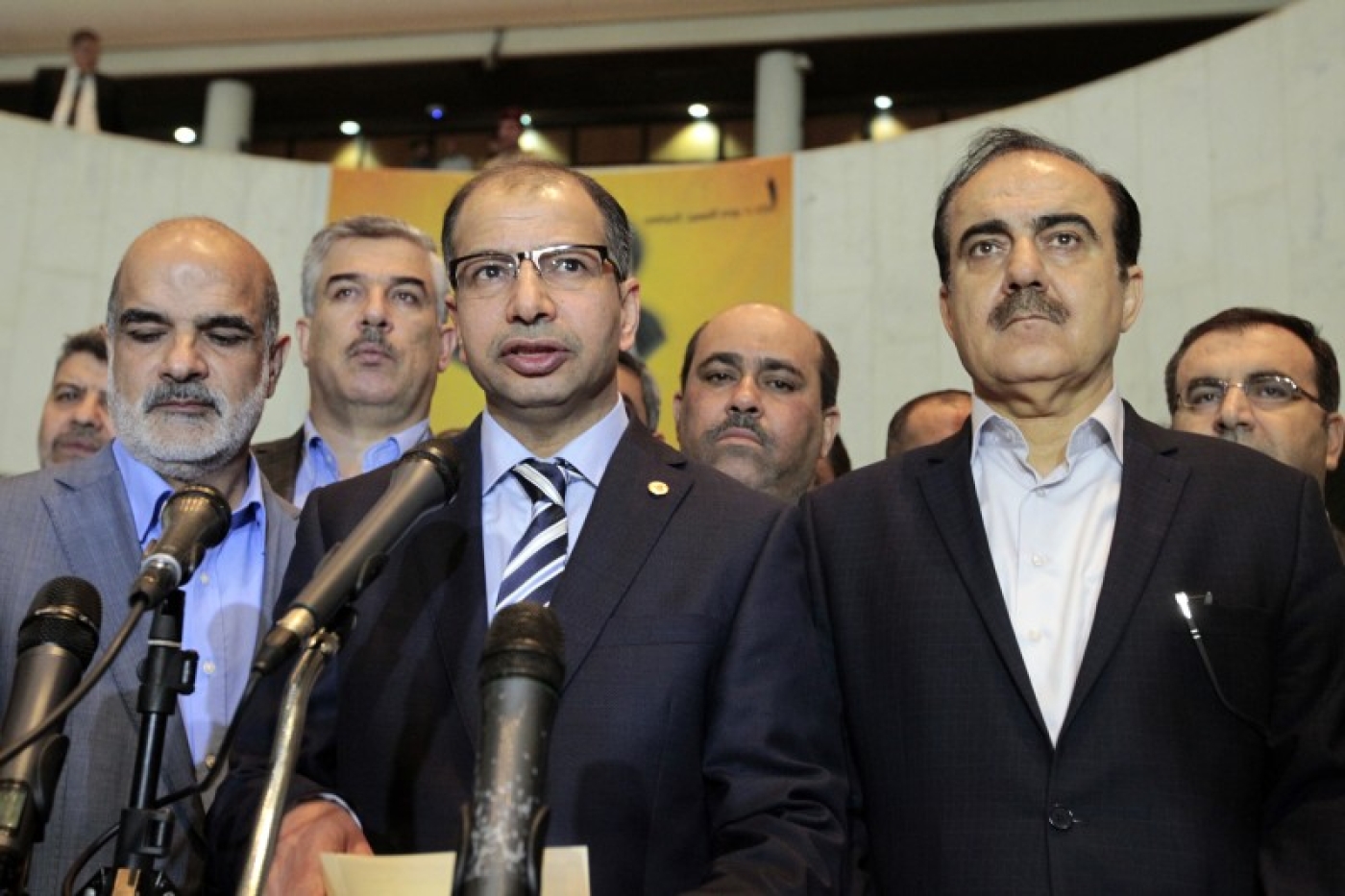 Salim al-Jabouri, the Iraqi parliament's speaker, speaks in the hall outside the parliament in Baghdad on April 13, 2016, as lawmakers launched a parliamentary sit-in to protest against the system of ministries being distributed according to political quotas (AFP)
By
MEE and agencies

A group of Iraqi lawmakers said they would not take part in a Saturday parliament session to select a replacement for the speaker, apparently leaving it without the necessary quorum.

Iraq was on course to have two rival claimants to the speakership, further increasing chaos in parliament, which has already seen a vote to sack speaker Salim al-Jabouri, a fistfight among MPs and a sit-in this week.

The political turmoil had sidelined Prime Minister Haider al-Abadi's efforts to replace the current cabinet, a setback for the premier.

Both the United Nations and Washington have warned that the political wrangling could undermine Iraq's fight against the Islamic State group, which overran large areas in 2014 but has since lost significant ground.

MP Qassem al-Araji announced that 23 lawmakers from the Shia Badr bloc would not participate in the session, saying the parliamentary division could result in two governments and undermine the fight against IS.

"We were living with two parliaments, and that could lead to two governments," Araji told journalists, warning that that might result in "the collapse of the front" against IS.

"We are against dividing the parliament, and we want to maintain the democratic political process in Iraq," Araji said.

Jabouri rejected the Thursday vote to remove him on the grounds that the session lacked a quorum and called parliament to meet on Saturday, but cancelled the session over an unspecified security risk.

He later announced the official delay of parliament sessions and called for dialogue to end the current deadlock.

But Jabouri's opponents insisted that the vote to sack him was legitimate and planned to hold their own session on Saturday to nominate replacements for him and his two deputies.

The Badr withdrawal effectively precluded the session from being held, though it was not immediately clear if it was final or just a strategy to gain concessions.

Badr chief Hadi al-Ameri is a top commander of Shiite paramilitary forces fighting against IS and also aspires to a senior government post.

MP Kadhim al-Shammari, a member of another bloc involved in the anti-Juburi session, called on the Badr lawmakers to return and "participate with their brothers in writing a new history for Iraq".

Abadi has called for the current cabinet of party-affiliated ministers to be replaced by a government of technocrats, but he has faced significant resistance from the powerful parties that rely on control of ministries for patronage and funds.

Those efforts have been put on hold by disputes over the new lineup and by the move to oust the speaker.

Abadi's opponents accuse him of undermining democracy and “leading a coup” against Iraq’s power-sharing political structure that has been in place since 2003, which guarantees a certain number of political positions to the country’s Shia, Sunni and Kurdish blocs.

Abadi told Middle East Eye in a phone interview that rival political blocs had not responded to his request for them to nominate their preferred independent candidates for cabinet posts last month.

He also said that the call for an independent cabinet had come from Moqtada al-Sadr, the influential Shia cleric who had threatened to raid Baghdad’s fortified Green Zone unless his demands for political reform were met.

"I asked to form a government of technocrats,” Abadi told MEE.

"At the beginning of last month I formally asked the (political) blocs to nominate technocrats who they think are appropriate, but the blocs did not do so," he said.

“It was Sadr who demanded a government of independents, except for the prime minister," Abadi added.

Abadi said he was committed to conducting government business in a professional manner, without interference from either his own or other political blocs.