In the final event of his visit, in Iraqi Kurdistan's capital Erbil, Francis tells worshippers that 'Iraq will always remain in my heart' Pope Francis blesses worshippers as he arrives to conduct mass at the Franso Hariri Stadium in Erbil, Iraqi Kurdistan, 7 March 2021 (Handout/AFP)
By
MEE and agencies

Pope Francis vowed on Sunday to keep Iraq in his heart, as he concluded the largest mass and the final public event of a historic trip meant to encourage the country's dwindling Christian community and deepen interfaith dialogue.

The pontiff celebrated among thousands of smiling worshippers in a sports stadium in the Kurdistan region's capital Erbil, after visiting Christian survivors of the Islamic State (IS) group's reign of terror, AFP reported.

The 84-year-old was driven in his white "pope-mobile" into the stadium, where jubilant worshippers sat socially distanced on white chairs spread out on the greens.

Others stood, craning their necks to catch a glimpse of Francis, in the stands ringing the Franso Hariri Stadium, named after an Iraqi Christian politician who was assassinated by militants 20 years ago.

'Now the time draws near for my return to Rome. Yet Iraq will always remain with me, in my heart'

In concluding the mass, the pope vowed to keep Iraq in his heart even when he returns to the Vatican on Monday.

"In my time among you, I have heard voices of sorrow and loss, but also voices of hope and consolation," he said.

"Now the time draws near for my return to Rome. Yet Iraq will always remain with me, in my heart."

The faithful wore hats featuring pictures of Francis, and face-masks to protect them from Covid, as a second wave has driven up cases to around 5,000 new infections per day in Iraq.

The stadium seats around 20,000, but large swathes of the stands were empty after authorities had trimmed down the allowed attendance in recent days.

"It's a special trip, also because of the conditions," said Matteo Bruni, the Vatican's spokesman, who described the visit to Iraq as "a gesture of love for this land its people".

Iraq's Christian population has shrunk to fewer than 400,000, from around 1.5 million before the US-led invasion of 2003.

'The most beautiful day'

Erbil has been a place of refuge for many Christians who have fled violence over the years, including IS's 2014 onslaught and ensuing reign of terror.

The heaviest security deployment of the rip yet protected Francis in northern Iraq on what was perhaps the riskiest day of his historic trip.

The city was targeted just weeks ago by a deadly rocket attack, the latest in a series of strikes blamed on pro-Iranian forces. 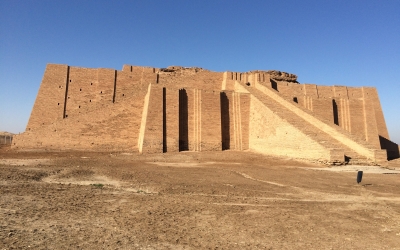 The visit to the north came the day after the leader of the world's 1.3 billion Catholics met Iraq's top Shia Muslim cleric, the reclusive Grand Ayatollah Ali Sistani, who agreed that Iraq's Christians should be able to live in "peace".

It also embodies a cause close to the pope's heart: reaching out to Iraq's traumatised Christian community.

Watching from afar as IS swept across the northern province of Nineveh in 2014, Francis said he was ready to come and meet the displaced and other victims of war in a show of solidarity.

He fulfilled that promise on Sunday, first visiting Mosul, the onetime bastion of the Islamic State group, still largely in ruins.

Standing in front of the partially collapsed walls of the centuries-old Al-Tahera (Immaculate Conception) Church, Francis pleaded for Christians in Iraq and the Middle East to stay in their homelands.

He said the "tragic" exodus of Christians "does incalculable harm not just to the individuals and communities concerned, but also to the society they leave behind".

'Do not lose hope'

The Al-Tahera Church, whose roof collapsed during fighting against IS in 2017, is one of the oldest of at least 14 churches in Nineveh province that were destroyed by the militants.

The pope was driven in a golf cart around the historic Old City, largely razed during the fight to dislodge IS.

"Today was the most beautiful day for us, being visited by the pope!" said Hala Raad, a Christian woman who had fled when IS seized Mosul but returned to see the pope, according to AFP. 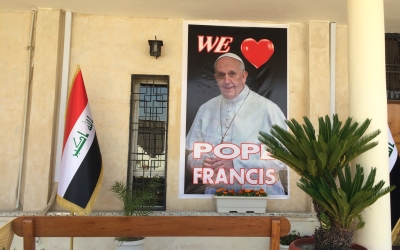 "We hope to come back to Mosul in health and wellbeing. The most important thing is security - we want stability."

Before visiting Erbil on Sunday, the pope held a prayer service in Qaraqosh, whose ancient church - named Al-Tahera, like the one in Mosul - was torched by IS as they destroyed most of the town.

Residents of Qaraqosh have since rebuilt their homes with little government help.

Al-Tahera too has been refurbished, its marble floors and internal colonnades buffed to host its most important guest yet.

Dressed in traditional embroidered robes, hundreds of Christians - who speak a modern dialect of Aramaic, the language spoken by Jesus Christ - welcomed the pontiff with hymns and olive branches.

"Do not stop dreaming! Do not give up! Do not lose hope!" Francis urged those gathered.

"Now is the time to rebuild and to start afresh."

After Sunday's mass had been concluded in Erbil, Francis met the father of Alan Kurdi, the drowned Syrian Kurdish toddler who became a symbol of the plight of migrants.

The photos of Alan's tiny body, washed up on a Turkish beach in 2015, shocked the world and brought renewed attention to the deadly sea route many migrants take to reach the West.

In a photograph published by the Vatican, the pope is seen raising his hand as if offering a blessing while looking intently at Alan's father Abdullah, who has his head bowed.

"The pope spoke for a long time with Abdullah Kurdi, and was able to hear the pain of a father who has lost his family," said a statement by the Vatican.

The Kurdi family originally hailed from Kobane in northern Syria, and were hoping to one day resettle in Canada.

But their dream turned to a nightmare six years ago when three-year-old Alan drowned alongside his older brother Galip and his mother Rehanna.

The only survivor was Abdullah, who resettled in northern Iraq.

The pope has for years called for an end to the conflict in Syria, which erupted in 2011 in protests against the ruling regime before spiralling into violence.

During an interfaith service in southern Iraq on Saturday, Francis had made a plea for "unity" after war.

"Let us ask for this in praying for the whole Middle East. Here I think especially of neighbouring war-torn Syria," he said. Inside Iraq
Pope Francis in Iraq for historic visit 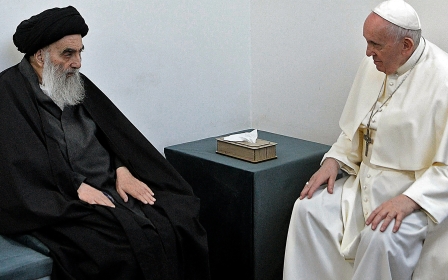 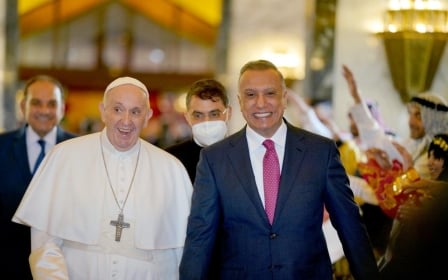