The last Islamic State militants in Mosul are putting up fierce resistance amid reports 100,000 civilians are being held as human shields 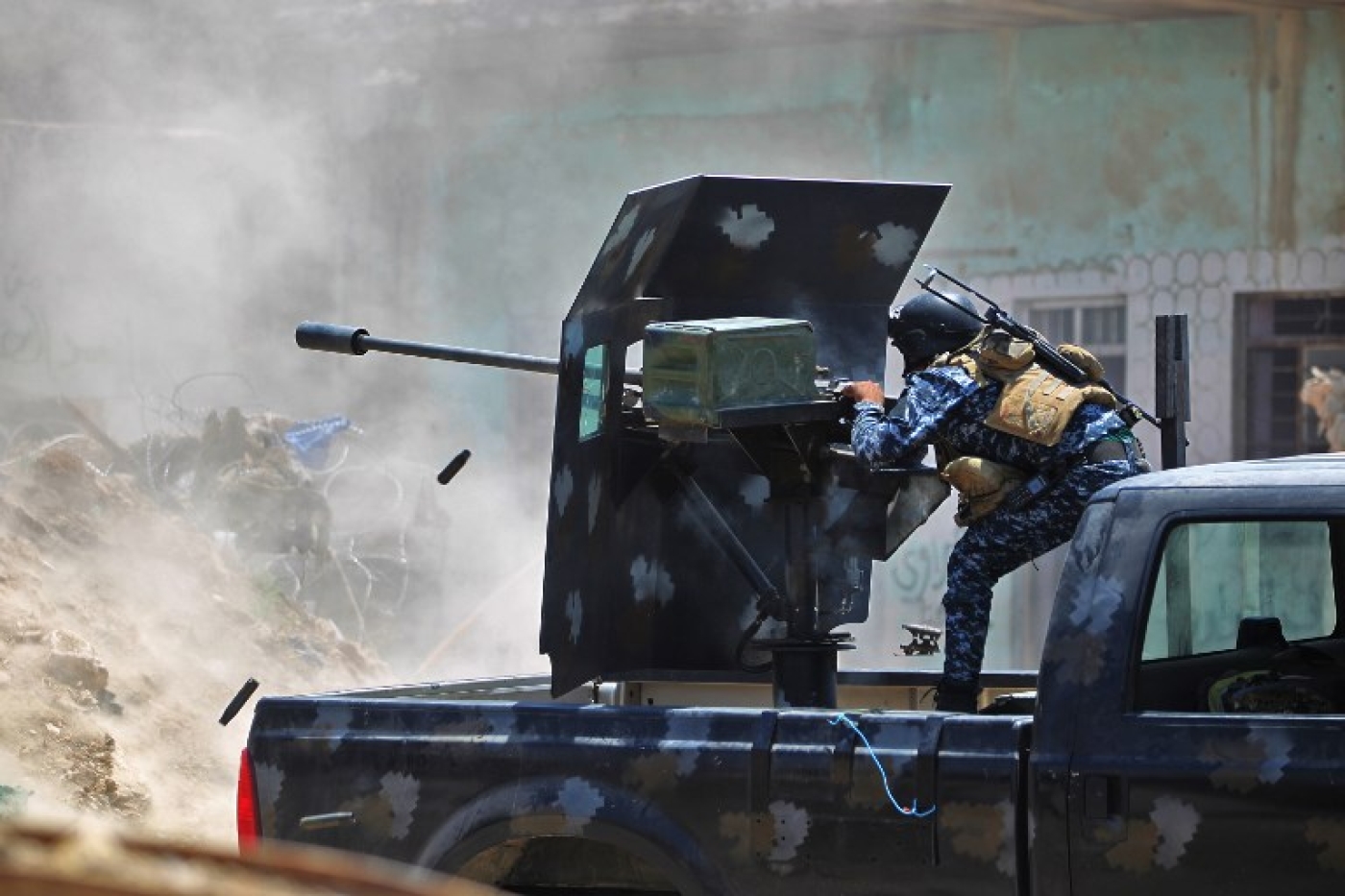 Iraqi forces fire an anti-aircraft gun as they advance towards the Old City of Mosul on 19 June 2017 (AFP).
By
MEE and agencies

The Iraqi army encircled Islamic State’s stronghold in the Old City of Mosul on Tuesday after seizing an area to the north of the city.

The push into Mosul's historic heart on the west bank of the Tigris marks the culmination of a campaign launched in October by Iraqi forces to retake IS's last major urban stronghold in the country.

The fall of the Shifaa neighbourhood after an assault by the Iraqi army’s 9th armoured division on Tuesday means that the Old City in the eastern half of Mosul is now surrounded by US-backed government forces, deployed north, west, south and across the river.

Abdulghani al-Assadi, a lieutenant general in the Counter-Terrorism Service (CTS), said the battle was proceeding as expected but progress was slow.

"Things are good and the battle is going as planned," he told AFP.

Iraqi forces have been battling for control of Mosul for eight months, and in May US officials said the battle had already seen the most intensive urban warfare since the Second World War.

The battle is now entering its final and most challenging phase amid reports of up to 400 civilians fleeing the city on Monday, including children suffering from scabies and other diseases.

Earlier this week, Iraqi forces dropped nearly 500,000 leaflets over the city, urging civilians to stay indoors and escape if they can.

Iraqi forces have also stationed armoured vehicles facing the Old City mounted with loudspeakers telling IS fighters: "You have only this choice: surrender or die."

Commanders say IS fighters are putting up fierce resistance and there are fears for more than 100,000 civilians after the United Nations said IS may be holding them as human shields in the Old City.

Levels of trauma experienced by Iraqis displaced from #Mosul truly alarming. Many children have scabies & are suffering from skin diseases pic.twitter.com/wuvNMTOSTz

On Monday federal police forces said they were moving forward on the southern front of the battle with support from heavy weapons fire and on the northern front had surrounded a hospital.

Iraqi forces launched the operation on Sunday to retake the Old City. Since then they have inched forward in the face of heavy sniper and mortar fire and booby-traps laid by IS fighters

Commanders have said the fighting is expected to be very difficult and could last weeks.

Surrounded by Iraqi forces on three sides and blocked on the other by the Tigris that runs through Mosul, the militants are cornered.

Since the start of the battle to retake Mosul, an estimated 862,000 people have been displaced. Around 195,000 have since returned, mainly to the city's east.

Elsewhere in the city a French and Iraqi journalist were killed by a mine explosion on Monday.

Stephan Villeneuve and Bakhtiyar Haddad were reporting on an advance by Iraqi forces against Islamic State militants.

Two other French journalists were injured, one of them seriously, by the blast in the Ras al-Jadah district west of the Old City.

Iraq is one of the world's deadliest countries for journalists and  27 professional and non-professional journalists have been killed in Iraq since the start of 2014, according to Reporters Without Borders (RSF).

Four have died since the launch of the US-backed offensive to recapture Mosul.