Iraqi forces gained new ground from the Islamic State (IS) group on Saturday in a key area west of the city of Fallujah, security sources said.

Fighters from the army, the police and from the Hashed al-Shaabi - a paramilitary organisation dominated by Iran-backed Shia militias - entered the centre of Saqlawiya.

The town lies around 10 kilometres northwest of Fallujah, and control of the rural area around it is key to cutting off the city, which Iraqi forces are trying to retake.

"The Iraqi army's 14th division and Hashed al-Shaabi stormed the centre of Saqlawiya town from the highway and raised the Iraqi flag," a statement from the Joint Operations Command said.

Federal police moving from a different direction were also involved in the operation to retake Saqlawiya.

As elite forces are trying to push into the centre of Fallujah, other forces have continued to clear areas around the city to ensure it is completely isolated.

The operation in Saqlawiya is aimed at cutting off Fallujah from Jazirat al-Khaldiyah, an area to the west which IS has been passing through to reach its positions elsewhere.

The Joint Operations Command said a US-led coalition air strike had hit a boat of IS fighters attempting to flee Fallujah along the Euphrates river, killing all on board.

Fallujah lies just 50 kilometres west of Baghdad and is one of IS's most emblematic bastions. Iraqi forces launched a major offensive to retake the city on 22-23 May. Inside Iraq
WATCH: Families in Fallujah risk Euphrates crossing to flee IS 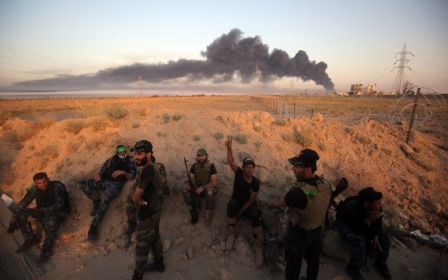