Fearing a wider crackdown by Iraq's security forces, protesters carry shields made out of metal drums (AFP)
By
MEE and agencies
, Azhar Al-Rubaie

Iraqi security forces violently cleared protest areas in Baghdad on Saturday, firing live ammunition and tear gas at anti-corruption protesters who had camped out in the country's capital for months.

"More than 50 vehicles driven by masked men approached the protest tents in Bahria square and encircled it. Security forces torched the tents and arrested many protestors. Anyone who is close to the area has been automatically arrested by the police"

Images posted online showed riot police had set fire to protest tents, with protesters deserting camps they had held for months in Baghdad.

Muhanned Rouabie, 42, is an unemployed engineer from Baghdad who is taking in the part in the protests. He told Middle East Eye that protestors had tried to keep riot police away from protest areas after they had torched his tent in Khilani square.

“The government used all means to subdue the protests but they are failing. We will return to where they burned our tents and keep protesting," Rouabaie said.

“If necessary, we will carry a weapon against anyone trying to attack us again. We will continue until we change this corrupt political class.”

“There is pressure from Iran over the Baghdad government to end the protests as it is in their interests, and Iran has forced the Iraqis to kill their own people and silent us. But we will never boy them."

Fearing the clear-outs as a sign of a wider crackdown, some protesters began carrying black shields made out of metal drums, with the words "Tahrir Shield Squad" painted on them.

Medical sources told AFP that six protesters had been wounded, while a medical source told Reuters that seven people had been injured earlier in the day.

Demonstrators had blocked off Tayaran Square and the Mohammad Qasim highway in east Baghdad since Monday in an attempt to pressure the government to enact long-awaited reforms.

Hours after the Baghdad protest camps were raided, similar raids took place in the southern city of Basra, where anti-government protesters had been violently dispersed.

Security forces had burnt tents belonging to protesters to the ground, with local authorities clearing up the remains in the square to reopen the area, according to AFP.

Mohammed Hashim, 33 years old, witnessed riot police burning tents in the protest areas inside Basra. He said the shock forces had entered the protest area near the square and "destroyed tents and arrested a number of prisoners."

“The protesters were sleeping inside the tents and there was not any protest or blockage to the streets, so why do they arrest them?” Hashim asked. “The forces chased the protesters in between the branched streets”.

An activist in Basra who wished to remain anonymous said that security forces had arrested protestors and beat them with batons before bringing in cleaning cars to clear out the areas.

"More than 50 vehicles driven by masked men approached the protest tents in Bahria square and encircled it. Security forces torched the tents and arrested many protestors. Anyone who is close the area have been automatically arrested by the police," the activist told MEE.

"Some are in hiding with their families until the police leave the area. They used force against the protestors and hit us with rubber stick batons. The riot forces brought the cleaning cars and cleared out the areas from the destroyed tents to curb the protests”

“Every single tent they torched, we will replace it with ten, they [security forces] dream to stop us from protesting, but we will give our blood and have nothing to lose till we achieve our goals.”

This latest escalation came only a day after thousands of people marched through Baghdad after a march was called by influential cleric Muqtada al-Sadr demanding US troops leave Iraq.

Sadr had initially supported the protests, but demonstrators fear that if the cleric stops supporting the movement, they would lose their political cover.

In Basra, protesters urged Sadr to reconsider what they said was a withdrawal of support for popular demonstrations.

In a letter circulated on social media, they called for the support of Sadrists, without whom they feared attacks by security forces. Inside Iraq
'Withdraw or prepare coffins': Thousands protest in Iraq against US troop presence 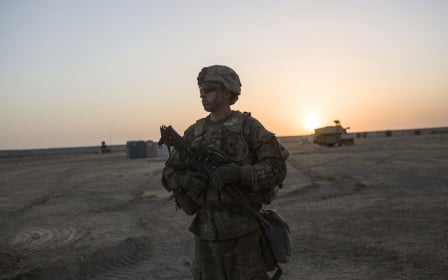