Cleric Muqtada al-Sadr and Iranian-backed militia chief Hadi al-Amiri, who won first and second place respectively in Iraq's May parliamentary election, announced an alliance between their political blocs on Tuesday.

The move announced from the Shia holy city of Najaf is the first serious step towards forming a new government after weeks of negotiations between parties. It comes exactly one month after an election marred by historically low turnout and fraud allegations.

The two Shia figures said they would keep the door open for other winning blocs to join them in forming a new government.

"Our meeting was a very positive one, we met to end the suffering of this nation and of the people. Our new alliance is a nationalist one," Sadr said.

The cleric, who once led violent campaigns against the US occupation of Iraq that ended in 2011, has emerged as an unlikely opponent of powerful Shia parties allied with neighbouring Iran and as a champion of the poor.

In the election, he backed the Sairoun list composed of his followers, the Communist Party, and other secular candidates.

Amiri, a fluent Farsi speaker, is Iran's closest ally in Iraq, having spent two years in exile there during Saddam Hussein’s rule.

The Fatih alliance he led in the election was composed of political groups tied to Iran-backed militias who helped government forces dislodge the Islamic State (IS) group militants from the third of Iraq they seized four years ago.

"Fatih and Saeroon announce forming the nucleus of the largest bloc and call on all winning blocs to participate in this alliance under a government programme agreed upon by all that is suitable to face the challenges, crises, and problems facing Iraq," a Fatih spokesman said in a statement.

The alliance, which together has 101 seats, is 64 short of the majority needed to form a government. It formed hours after Prime Minister Haider al-Abadi, whose own bloc came third, urged politicians to keep negotiating over government formation despite an impending nationwide manual recount of votes.

Parliament mandated the recount after Abadi said a government report showed there were serious violations.

A few days later, a storage site housing half of Baghdad's ballot boxes caught fire, raising tensions and prompting some to call for the election to be repeated.

Abadi said on Tuesday he opposed a repeat, echoing the stances of Sadr and Amiri, and warned that anyone who tried to sabotage the political process would be punished.

He may yet secure a second term as a compromise candidate if he joins Sadr and Amiri and manages to win their backing.

"The matter is exclusively in the hands of the judiciary, not politicians. The government and parliament don't have the power to cancel the election," Abadi said of a ballot repeat.

The government report had recommended a recount of five percent of votes but the outgoing parliament, in which more than half of lawmakers including the speaker lost their seats, instead voted for a nationwide one.

Amiri said on Tuesday he supported only a partial recount.

Sadr has warned that certain parties are trying to drag Iraq into a civil war. In an article published on Monday, he urged Iraqis to unite.

"Is it not time to stand as one for building and reconstruction instead of burning ballet boxes or repeating elections just for one seat or two?" he added.

"Is it not time to disarm and hand over weapons to the state instead of storing it in mosques so that it explodes and kills the innocent?” 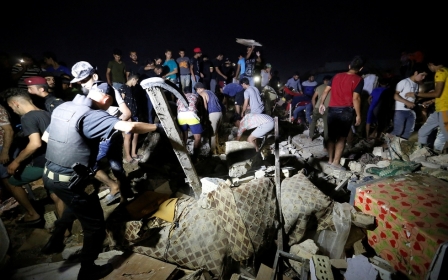 Inside Iraq
Blast kills at least 18 in Baghdad's Sadr City