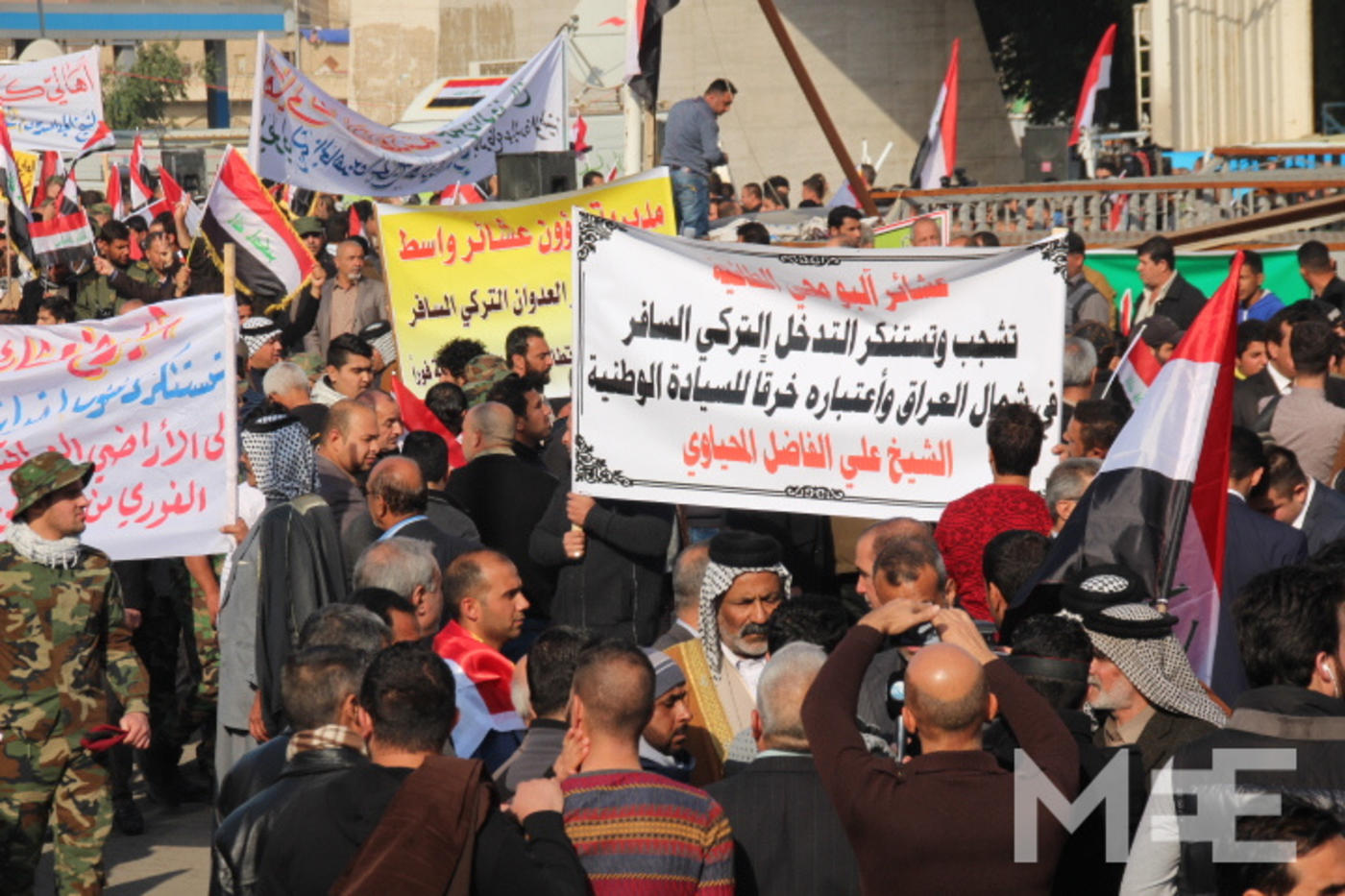 The protesters chanted: "With our soles, with our blood we will protect you Iraq" (MEE/Hadeer al-Sayeid)
By
Suadad al-Salhy

BAGHDAD - Thousands of mostly Shia paramilitary fighters took to the streets in Baghdad on Saturday to protest Turkey’s military deployment in northern Iraq and demanded its immediate withdrawal.

The demonstrators gathered in central Baghdad’s Tahrir Square wearing military uniforms and black suits. Throngs of women wearing the traditional abaya had put yellow scarves around their shoulders and waved yellow flags adorned with green graphics – a reference to the prominent Shiite militia Kataib Huzballa-Iraq. Other groups displayed a white flag that symbolizes another Shia militia - Asaib Ahl al-Haq. Many other demonstrators simply raised Iraqi flags and banners that read, "Erdogan, the thief of the neighbors' wealth" and "our sovereignty is our dignity".

The demonstrators chanted: "With our soles, with our blood we will protect you Iraq."

"This (demonstration) is a message for the government. The Iraqi people are able to protect their lands and maintain their sovereignty," Hussien al-Saadi, a Shiite commander told Middle East Eye while waving a small Iraqi flag.

Turkey deployed around 600 heavily armed troops last Thursday to a camp in Ba'ashiqa, a town near IS-controlled Mosul. The government of Iraq considered this action as a "violation of sovereignty" and has asked the Turkish authorities for an "immediate withdrawal" from the Iraqi soil.

Turkey's President Tayyip Erdogan shot back at a press conference that his troops were sent to northern Iraq to train Kurdish forces and that a withdrawal is "out of the question for the moment".

Iraqi Prime Minister Haider al-Abadi delivered a televised speech on Friday, saying "Iraq…is being subjected to a flagrant violation of its sovereignty by a neighboring state (Turkey), so we have a right and a commitment to practice all the procedures to maintain its sovereignty and the unity of its soil". Abadi stressed in his speech that the Turkish "armed force" were "forcibly" deployed in northern Mosul.

Saturday's demonstrations were primarily organised and participated by Shia armed factions linked to Iran, including Badr, Asaib Ahl al-Haq, Kataib Huzballah and other small groups. Most of the commanders and political leaders of the participated groups are followers of the senior Iraqi Shia hardline cleric, Kadhim al-Haieri, who has been based in Iran since the 1970s.

"Being involved in battling Daiesh (another term for the Islamic State group) does not mean that we are not able to fight on another front. We fought the Americans before and we do not mind fighting the Turks this time," according to a fighter within the state-sponsored Shia-dominated Popular Mobilisation Force.

Shia militias linked to Iran make up the backbone of the Popular Mobilisation Force, a body established by the Iraqi government as an umbrella group for several sects and armed factions to combat against Islamic State (IS) militants.

"This our last peaceful message to Erdogan, if his troops do not leave northern Iraq, our fighters' hands will reach them," Abu Talib al-Saiedi, a commander of Kataib Huzballah-Iraq militia told MEE.

"We as Kataib Huzballah-Iraq say if you (the Turks) do not listen to this demonstration, we will force you to hear the voice of our rifle and IEDs," al-Saiedi added.

The Islamic State group seized more than a third of the Iraqi territories in the northern and western parts of the country last year, but Iraqi security forces and Kurdish Peshmerga backed by the Shia militias and the US-led coalition air strikes have gained back control, including the provinces of Salahudeen in northern Baghdad and Anbar in western Baghdad.

Iraq’s government on Friday forwarded a complaint to the UN Security Council after a Turkish delegation arrived in Baghdad to "discuss the repercussions of the recent crisis" between the two countries, but left without giving any guarantees that Turkey will pull out its troops, Iraqi officials said.

Ayatollah Ali al-Sistani, one of the most prominent Shia cleric in Iraq said on Friday that the government is responsible for protecting the country’s sovereignty. He urged people to show restraint towards foreign residents in Iraq.

"The Iraqi government is responsible for protecting Iraq's sovereignty and must not tolerate and side that infringes upon on it, whatever the justifications and necessities," Sheikh Abdul al-Mehdi al-Karbala'i, one of Sistani's representatives, said during the Friday prayer.

Iraqi Shiite militias including Badr, Kataib and Asaib have threatened to target all Turkish interests and citizens in Iraq.

"You are not stronger than the Americans," Hadi al-Aamiri, the prominent Shia leader and the head of Badr Shia militia, said to Turkish leaders in a televised ceremony last week:

"The Americans were forced to leave and you will be forced, too,” he added. 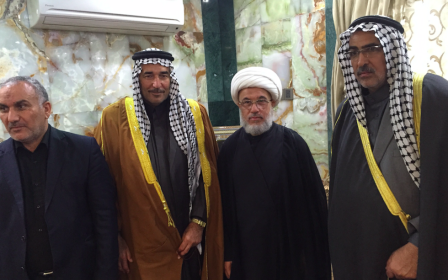