Twenty people who fled Iraq's Fallujah have died in a huge makeshift camp for the displaced, local leaders alleged on Thursday, as fears grow about a humanitarian catastrophe for residents of the city.

The council of Anbar province, of which Fallujah is the second biggest city, said 15,000 people who fled were being detained at a makeshift camp 30km to the south in Amariyat al-Fallujah while authorities carry out checks.

Medical sources in Amariyat al-Fallujah told Al-Jazeera that many who had died were elderly and suffering from chronic health conditions such as diabetes, and deteriorated because of a lack of shelter from the blistering sun.

Tens of thousands of people have fled Fallujah during an assault by Iraqi forces to retake the city from Islamic State (IS) group, which has been in control since 2014.

Most of the internally displaced people (IDPs) have fled towards Amariyat al-Fallujah. 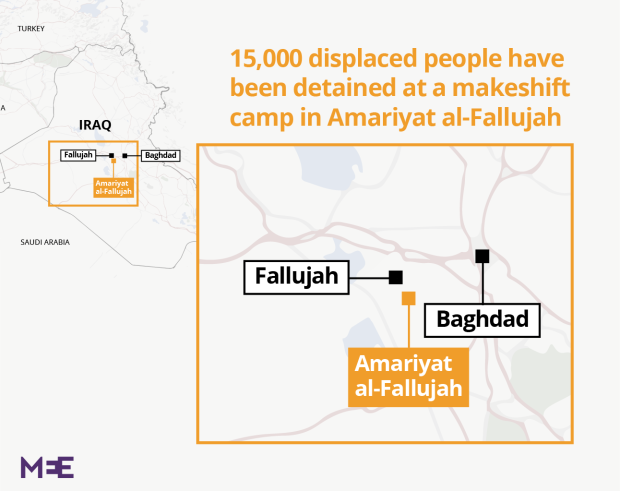 The head of Amariyat's council, Shakir al-Isawi, said on Wednesday that 27,000 people were now living in 10 camps in and around the town.

One in particular has been described as a “detention centre” by members of the Iraqi parliament, who demanded that authorities speed up their investigations to allow people to leave more swiftly.

A member of Anbar provincial council who specialises in security, Bakarat Isawi, told local news site al-Mada on Thursday that men and male youths fleeing Fallujah had been separated from their families “so that their names can be investigated”.

“There is a delay in releasing them because of a lack of employees to carry out the investigations,” he said.

The Norweigian Refugee Council said that the people of Fallujah had fled one nightmare only to step into another.

NRC member Karl Schembri said there was little aid available at the camp, where it was a "question of life of death" for those inside.

"The conditions are dire, hundreds of family are out in the open. I have seen people collapsing. People are exposed to the elements - it gets to 50C," he told the BBC. "There is a huge shortage of water and medicine."

Authorities fear that some of those fleeing Fallujah are themselves members of IS. Last week they announced that they had arrested more than 500 suspected militants who had mixed in with civilians who were fleeing.

Iraqi officials have also warned that some of the city's residents could have been “brainwashed” by IS after living under its rule for years.

The army's military campaign in Fallujah began nearly a month ago, and aid organisations have warned of an impending disaster if provisions are not made for the IDPs.

The Norwegian Refugee Council, which runs camps around Fallujah, warned this week that it could no longer provide the required assistance, with water supplies being used up too quickly. Iraq at War
Only a third of Fallujah 'cleared' of IS, US says days after victory declared