In Iraq's Anbar Desert, liberated from the Islamic State a year ago, an active and controversial presence of international forces remains 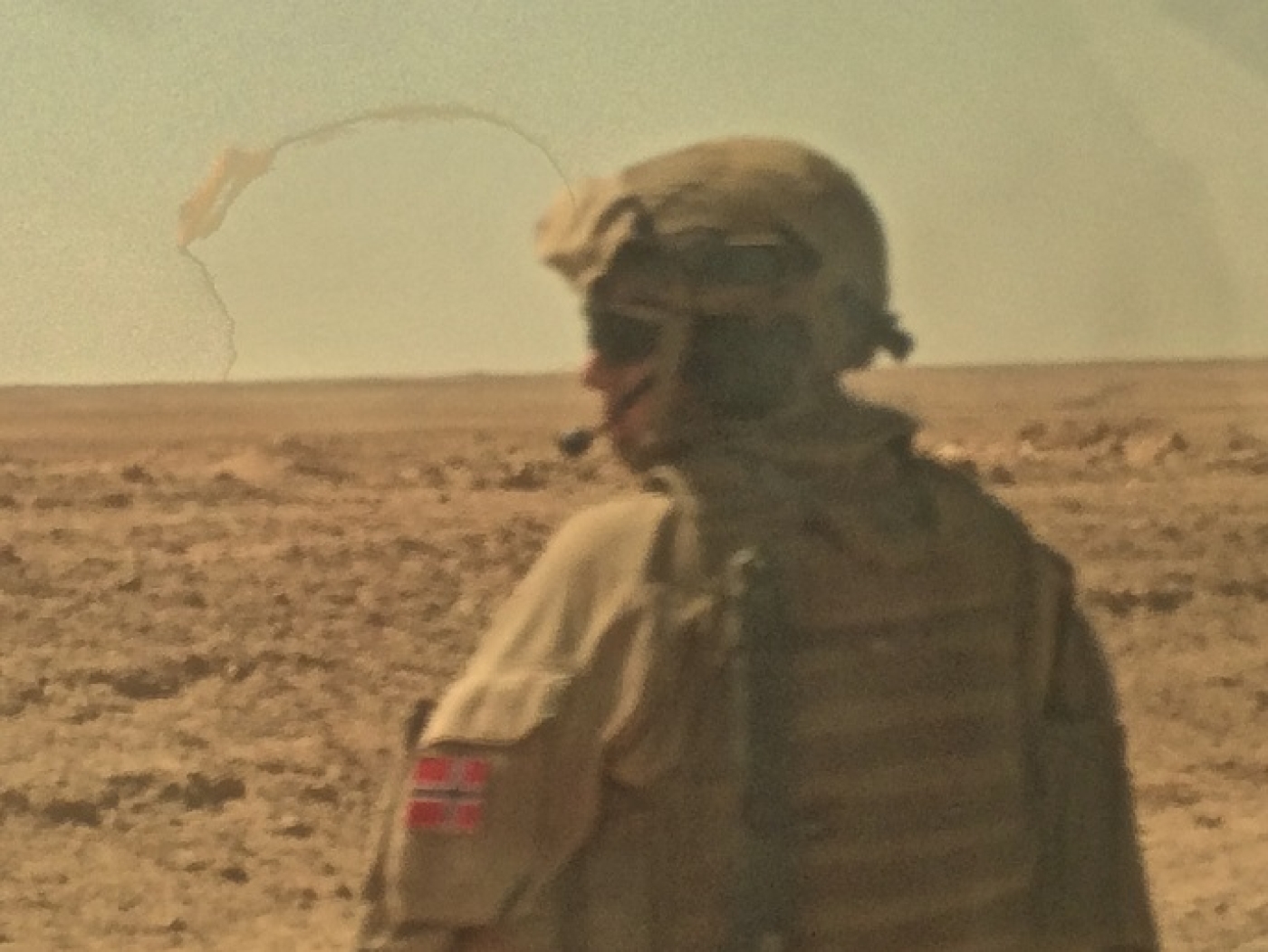 AL-QAIM, Iraq - Reverberations from US-led coalition missiles fired into Syria from a nearby military base echo out across Iraq's border town of al-Qaim every few nights.

"They're French," says one soldier flatly in the silence following a series of heavy outgoing missiles. "The French missiles are always fired in rounds of three."

The Americans see everything, including IS activities in this area, but they do nothing, and instead they attack us and make problems for us

Al-Qaim, lying 400 kilometres from Baghdad and strategically located near the Syria border, was liberated from the Islamic State (IS) group in November 2017 but remains on the fringes of the regional battle against IS insurgency.

Iraq's outgoing prime minister, Haider al-Abadi, said in mid-October that "small numbers" of coalition forces remained stationed in Anbar under an agreement with the Iraqi government, to enable them to carry out operations against IS targets in Syria and boost border security.

"We agreed with the international forces to cooperate on Syria operations and they have taken some action against IS inside Syria, especially where IS are utilising their positions there to attack Iraq," he said, adding that military bases in Anbar also made it easier for international forces to evacuate wounded from Syria via Iraq. 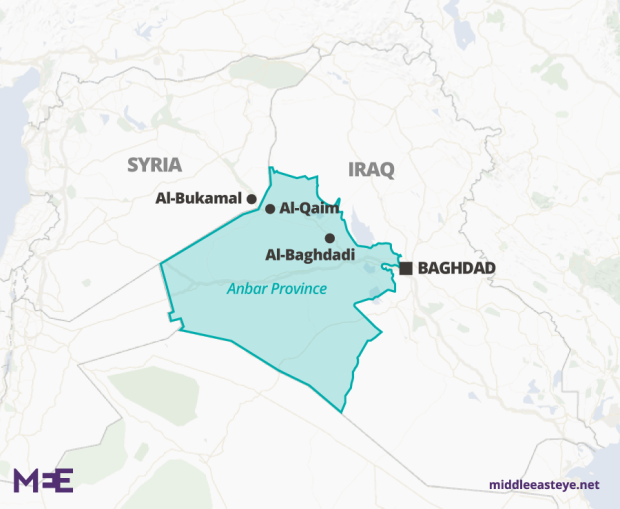 On the ground, however, a senior source in Iraq's Hashd al-Shaabi (Popular Mobilisation) forces told Middle East Eye that coalition forces - mainly American, French and Canadian - were based in three adjacent military bases occupying an approximately four-square-kilometre area near the Anbar town of al-Baghdadi, 150km from the border, along with other operational bases closer to al-Qaim.

"Al-Baghdadi is now one of the biggest US military bases in Iraq," he said, speaking on condition of anonymity. "It is three bases in one area heavily guarded by the Iraqi Army, and no other Iraqi forces can get near there."

CJTF-OIR spokesman Colonel Sean Ryan, who echoed Abadi's claim that the numbers of coalition troops in Anbar province were small, told MEE that locations used by international forces were Iraqi-operated and that the coalition did not have its own military bases in Anbar.

"We have a few temporary bases but only for operational purposes, and not necessarily in Iraq," he said. "Any small operating base we operate in is temporary, we have nothing that is permanent, and [we] usually fall in on Iraqi-built and occupied bases."

Ryan said coalition forces were "mainly just trainers" who "advise and assist troops if they travel with the Iraqi Security Forces on a mission". He admitted that the coalition used the al-Qaim area for ground-launched operation, but said these were only conducted "in support of the Iraqi security forces".

Convoys of tan-coloured coalition vehicles trundle along the main desert highway running through Anbar province most days. The American convoys are usually a distinct line of Mine-Resistant Ambush Protected (MRAP) vehicles, designed in 2007 to protect US forces against a campaign of IEDs deployed by Iraq resistance fighters.

Anbar, Iraq's largest province, has a 15-year history with American forces. Following the 2003 US-led invasion of Iraq, much of the predominantly Sunni province resisted the presence of international forces, and more US servicemen were killed in Anbar than anywhere else in Iraq. Insurgency flourished as US forces struggled to maintain control over the area, where they were accused of using excessive force and firepower.

'They see everything, but do nothing'

Leading a patrol along border positions held by his forces, the deputy commander of the Hashd al-Shaabi forces in Western Anbar, Ahmed Nasrallah, confirmed the presence of coalition bases in the desert area around al-Qaim.

"The Americans see everything, including IS activities in this area, but they do nothing, and instead they attack us [the Hashd] and make problems for us," he said. "The US don't want Iraqi security forces in this desert area."

He cited an attack in Anbar a few weeks earlier, which had targeted Hashd al-Shaabi forces rather than IS militants. The attack, which did not result in any casualties, was apparently a botched exercise by Canadian forces, who are understood to have apologised to the Iraq government afterwards.

Nasrallah also accused the American military of continuing to support IS, saying: "The Americans are helping IS, and the IS fighters we now capture only have American weapons."

Another soldier based in al-Qaim said one of three IS fighters captured recently in the Anbar Desert had carried an ID card dating back to 2008 granting access to US military bases. This, he claimed, was another clear indication that IS fighters were in cahoots with the Americans.

"Everyone knows that the US brought IS to Iraq," said the commander of Hashd al-Shaabi Brigade 17, Hamad Mohsein, from a border position where his forces continue to flush out small groups of IS insurgents.

"We don't have any direct problems from coalition forces in this area at the moment, but we don't want any international forces in Iraq. We just want Iraq to be left alone, in peace."

MEE could not independently verify any of the claims by Hashd al-Shaabi members.

Fighting IS or obstructing the 'Shia Crescent'?

"We are seeing the fleeing ISIS fighters coming back into the Anbar region and using it as a safe haven," Ryan said, although he later admitted that coalition forces "do not do a lot of military operations in Anbar".

"The mission here is still the same, the enduring defeat of ISIS," he said.

However, a senior commander with the powerful Hashd al-Shaabi brigade Asaib Ahl al-Haq, which a US senator has been trying to designate a terrorist organisation, told MEE that "fighting ISIS in Syria" was merely a pretext for international forces remaining in Anbar.

"The ongoing presence of American forces in Anbar is not to fight ISIS in Syria but to try and break the Shia crescent stretching from Bahrain to Lebanon, and the Americans do not want to give up this area," he said, speaking on condition of anonymity.

Al-Qaim, although a Sunni Muslim town, plays a strategic role in the so-called Shia Crescent, housing a base for Iraqi fighters who, operating independently from the Iraqi government, continue to cross the border to fight against IS and other opposition fighters alongside Syrian government forces. Shia fighters from Iraq, Afghanistan and Pakistan have long played a significant role in the Syrian civil war.

Sporadic missiles fired from Iran towards targets in Syria, including around Deir Ezzor, also fly directly over al-Qaim, according to soldiers stationed there.

We don't have any direct problems from coalition forces in this area at the moment but we don't want any international forces in Iraq. We just want Iraq to be left alone, in peace

Although they are technically engaged on the same mission - to destroy IS remnants and secure the border area - tensions remain between the coalition and the predominantly Shia Hashd al-Shaabi, formed in 2014 to fight IS and now an official military force under control of the Iraqi government.

Commanders continue to claim that a US air strike killed 22 Hashd al-Shaabi fighters and injured a further 12 on a border position in June this year, although Ryan told MEE that the coalition did not carry out this attack.

Ongoing Western attempts to pressurise the Iraqi government into disbanding the Hashd forces have so far failed.

Abadi estimated the coalition forces would remain in Anbar for a further six months before they eliminate IS cells in Syria, but the Asaib Ahl al-Haq commander told MEE that coalition forces had no intention of giving up their military positions in Anbar and would try to maintain their hold on this territory for as long as possible.

"Although they don't want to leave, their presence there will not be permanent, especially now, after we won so many seats in the elections," he said, referring to the results of this year's Iraqi elections. "This US military presence in Anbar will be temporary."

IS continues to pose a threat in Anbar Province, especially in the border regions. A new unexploded IS car-bomb recently discovered by the Iraqi military near the Anbar desert town of Akashat, fitted with 11 mortars, multiple ant-tank mines, the explosive C4 and canisters of black oil, shows IS remnants are still active and working on more deadly weapons.

"I've seen many IS car-bombs, but I've never seen one designed to cause such a massive explosion," admitted a Hashd al-Shaabi military engineer. "This is a new idea and style, especially the use of anti-tank mines strapped inside all the doors."

This week, Iraqi border forces were put on a state of high alert after IS seized control over several areas in Syria near Albu Kamal secured by the US-supported Syrian Democratic Forces.