Iraq's Popular Mobilisation Forces have caused much controversy, but Bayati insists they have helped restore order to much of Iraq 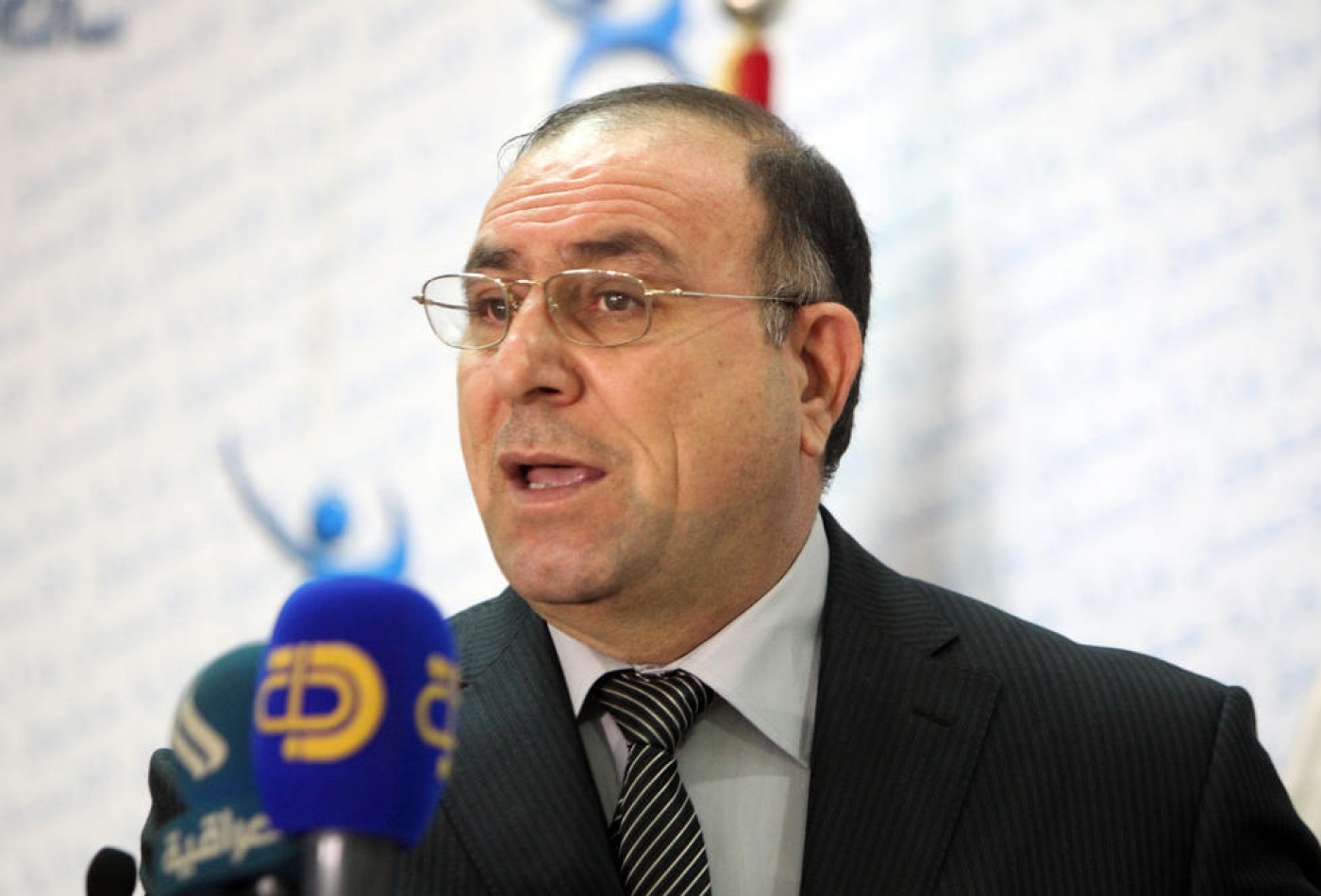 Mohammed Mahdi Ameen al-Bayati, the Iraqi minister of human rights, speaks during a press conference in the capital Baghdad, on 10 June (AFP)
By
Simona Sikimic and Mary Atkinson

Dr Mohammed Mahdi al-Bayati‏ probably has one of the most challenging jobs in the world right now.

As Iraq’s human rights minister, he has been left grappling with the rise of the Islamic State group, renowned for committing some of the worst human rights abuses of the 21st century, and tasked with defending Iraq’s already fragile human rights legacy in a time of war, rising sectarianism and fragmentation.

Last year, millions of people fled their homes in a matter of months and more than four million Iraqis are now internally displaced and increasingly vulnerable to abuses. The rights of women, children and minorities have all been put under heavy strain. Shia militias brought in to help combat IS have in some cases become a law unto themselves, with human rights groups accusing them of looting and burning the homes of Sunni Muslims. Human rights funding from the central government has also dried up, with resources funnelled into the war effort.

Yet Bayati‏ - who replaced Mohammed Shia al-Sudani last year after a shake-up that saw the departure of Prime Minister Nouri al-Maliki - insists that his ministry and government remain committed to fostering human rights in the country, saying that valuable work carries on in spite of it all.

“IS is a huge challenge for us in Iraq, and there is a big risk for Iraq: they now control three areas,” Bayati told Middle East Eye during a recent visit to London organised by the Amar Foundation, an international aid charity that focuses on helping refugees in Iraq and Iran.

“There has been a big human rights challenge in the last year since IS began their advance. We have not been able to do our duty because of the security risks.”

“IS and the former regime [of President Saddam Hussein] have attacked minorities, and huge numbers of minorities have left their areas and sought refuge in Baghdad and other cities. We are working with international organisations to protect them, and we are passing our reports on to these organisations.”

IS swept through vast swathes of Iraq last June when it captured the country’s second city of Mosul in days and seized the central city of Tikrit and its adjoining oil fields. Since then, getting information out of the IS-held territory has been difficult, with IS brutally punishing anyone deemed to not be conforming to its rigid way of life.

Bayati, however,‏ says that his Baghdad-based government still has support in Mosul, and is determined to one day bring all human rights violators to account.

“There are ongoing attempts to document the human rights violations committed by IS against the Iraqi people [even in the IS-held areas]. It is our duty to document them through reports and photographs and by meeting witnesses,” he said.

“We have sources. IS is in Mosul but not everyone in Mosul is with them.”

Despite the ongoing occupation of large areas of Iraq, authorities have already begun attempting to bring perpetrators to justice. On Wednesday, Iraq sentenced 24 men to death for their involvement in the Camp Speicher massacre, in which IS militants killed up to 1,700 mainly Shia soldiers. Hundreds of others wanted in connection with the killings, most of them carried out execution style, remain at large.

While human rights groups condemn the death penalty, the punishment is legal in Iraq. Bayati defended the measure, saying that judgement is only passed down after a thorough investigation.

“More than 15 of them [the defendants] admitted it and said they worked as instruments in the killing. Others are still being investigated,” he said.

“The families have big problems because they lost their loved ones in this mass killing - the crime has to be understood as a mass murder.”

The blistering advance of IS caught almost everyone by surprise, but the group’s ability to gain and then hold large parts of the country has since, in part, been attributed to sectarian policies set by mainly Shia leaders in Baghdad that many say worked to alienate Iraq’s Sunni minority.

While Maliki's removal and the appointment of new premier Haider al-Abadi last September was designed to reverse that trend, many of the country’s Sunnis have remained suspicious of Baghdad’s intentions.

The rise of the anti-IS government-backed Shia militias, formed after a famous 13 June 2014 fatwa by Iraq’s leading Shia authority Ali Husayni Sistani, has not helped matters, with the militias accused of fanning tensions and committing a range of human rights abuses.

Bayati‏, though, is quick to defend the volunteer militias known as the Popular Mobilisation Forces or al-Hashd al-Shaabi in Arabic.

“These forces are protecting Iraq and work in co-ordination with the army. They succeeded in liberating areas in Tikrit and Salah al-din [north of Baghdad]. They are now encircling Baiji [some 130km north of Baghdad and home to a major oil refinery] and they are fighting in the cities,” Bayati said.

“Yes, there can be mistakes in urban warfare, and the ministry has documented these mistakes. But these mistakes do not reach the level of violations, because they do not target the Iraqi people,” he added.

According to Bayati more than 2,000 of the volunteers have been killed “in the fight to protect Iraq” since last year. He also asserts that with their help, anti-IS forces – which have been backed by US-led airstrikes since August 2014 – have now managed to win back 50 percent of the territory seized by IS.

This figure may be inflated, with the US in April saying that 25 to 30 percent of the country had been won back, and largely thanks to Kurdish advances in the north, but Bayati remains adamant that the militias are helping to make Iraq a safer place.

“There is not a big [security] risk in Baghdad - the risk is in Mosul and other similar places,” Bayati said. “Since the hashd [militias] were formed, and began working in co-operation with the army, the risk is smaller. The militias and armed forces have managed to retake more than 50 percent of the areas that IS took control of.”

But reclaiming territory is just one part of the struggle. People still have to be encouraged to return and to start rebuilding their lives. This process can be long and arduous, and as is so often the case the most vulnerable like women, children and the elderly are likely to be hit the hardest and left most open to abuses.

Bayati says that as soon as the conflict with IS subsides, his ministry has a plan in place to help “all the victims of crimes committed in this period”. He says, too, that he wants to work with partners in the region who have also been hard-hit by the rise of IS, but the international community will also have to play a leading role if Iraq and its neighbours are to have any chance of building a better, safer and more stable future.

“After peace is restored in Iraq and IS is kicked out [with the help of international powers] we plan to strengthen the status of human rights in all provinces of Iraq,” said Bayati.

“To do this though we need help because of the current austerity policies in Iraq. We will need to work with international organisations and courts.”