One source says it's all about paying back, that Maliki wants to hit Prime Minister Abadi, no matter what may result 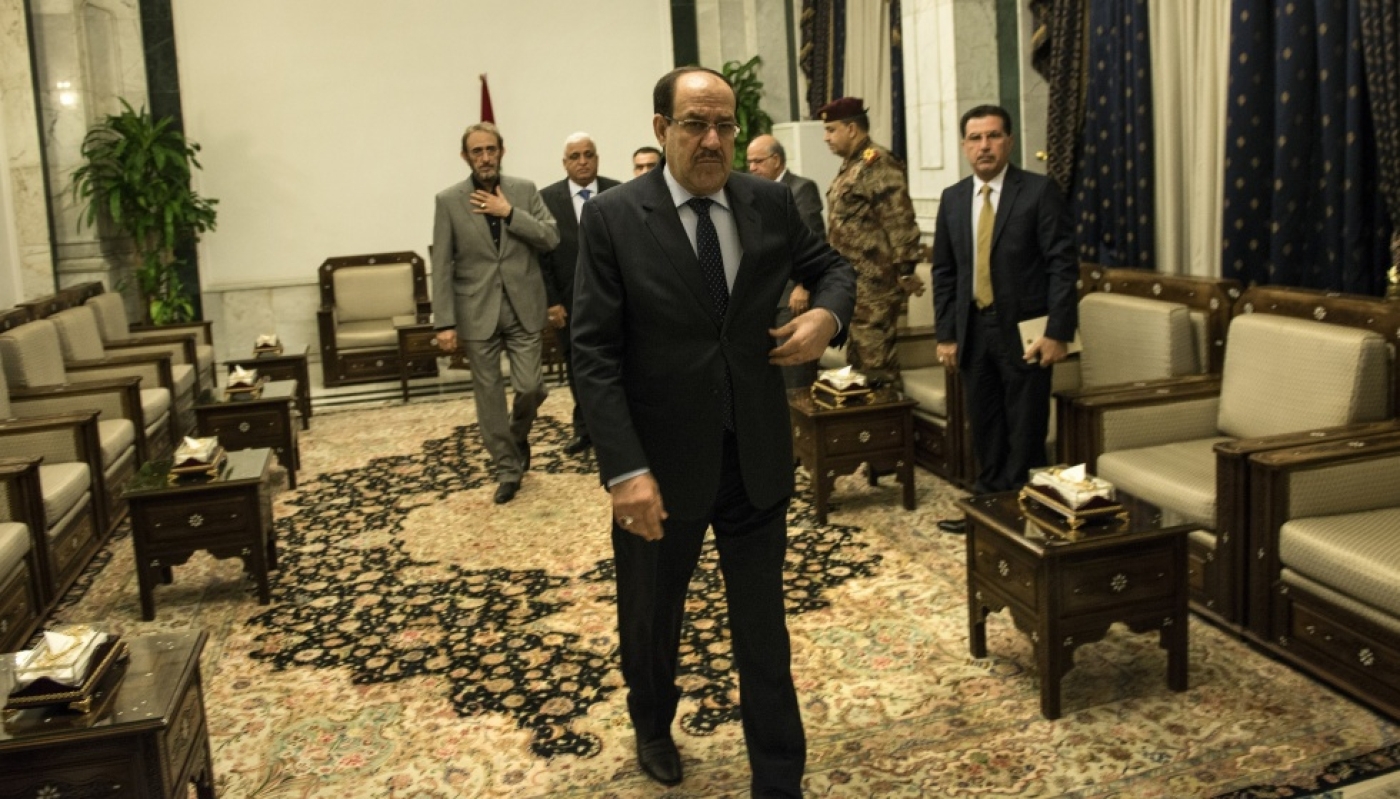 On Wednesday, more than 170 Iraqi MPs protested against the heads of parliamentary blocs who have stymied the reform efforts of Prime Minister Haider al-Abadi's in putting together a government of technocrats, and staged a sit-in inside parliament. A day later, the protesting MPs voted to dismiss Salim al-Jabouri, parliament's speaker.

The MPs say they followed parliamentary rules, but the Supreme Federal Court is likely to disagree on procedural grounds. In the meantime, the rebel MPs may choose a new speaker as a precursor to interrogating the prime minister and the president, with the publicly stated intention of bringing them down.

To stop the train – or at least to reroute it – figures involved in talks told MEE that the heads of political blocs must negotiate with Maliki, who controls more than two-thirds of the rebellious MPs.

"Those who led the coup were Maliki's MPs and were under his supervision," said a senior Shia leader familiar with the current political bloc negotiations, who spoke to MEE on condition of anonymity. "I have all the text messages and instructions he sent to his people," the leader said. "He is the one holding all the strings of the game. He can keep it up or end it."

Maliki governed Iraq between 2006 and 2014. Despite winning the highest share of the vote in 2014, he was blocked from a third term by political rivals and Shia clergymen after many Iraqis blamed him for the spectacular loss of almost a third of Iraqi territory to the Islamic State (IS) group. Abadi, Maliki's political party mate, in cooperation with Maliki's Shia, Sunni and Kurd rivals, succeeded him to the top office.

Maliki was appointed vice president, but Abadi, in response to massive demonstrations, abolished Maliki's post last August as part of his first package of reforms. Since then, the tension between Maliki and his rivals has been high.

"The Iraqi people want reform and we [the protesting MPs] are authorised by the Iraqi people to find a mechanism to achieve that reform, and the start … has to be replacing the three top officials," Ali Subhai, a lead State of Law MP and Maliki's nephew, said on Thursday in a televised interview.

"These positions are not confined to these people. They are not representing Iraq. We represent the Iraqi people, not the speaker of parliament or the prime minister or the president," Subhai said.

Iraq has seen weekly demonstrations since August protesting against the lack of basic services and financial and administrative corruption rampant in government ministries. The protests were energised when powerful Shia cleric Moqtada al-Sadr backed them and asked his followers to begin a sit-in on 18 March at the gates of the green zone, the home of government buildings, parliaments and embassies.

More than a week later, Sadr escalated the pressure by beginning his own sit-in inside the green zone, just a few metres from the internal entrances to the cabinet and the parliament. He demanded Abadi form a "government of independent technocrats," free of influences from the political blocs within parliament.

The blocs responded to Sadr's pressure and voted on 31 March to give up their power-sharing system and agreed to pass Abadi's new cabinet of technocrats in 10 days.

After Sadr ended his sit-in and called on his followers to go home, the political blocs changed direction.

"Establish a consultative political council alongside the prime minister, president and speaker of parliament, whose members include the leaders of the essential political forces in the country … to be held monthly to discuss strategies of the country," one of the items reads.

"The political blocs will present their nominees for the cabinet to the prime minister, and he can choose them in a way asserting national [power] sharing," another item reads.

The document has sparked a wave of anger and cynicism among Iraqis on social media.

Hours later, Sadr, who boycotted the meeting of heads of political blocs, left for Beirut.

On Wednesday, Sadr's parliamentary bloc, most MPs of Maliki's State of Law and many Sunni MPs dissenting from their blocs rebelled against Jabouri's orders to end the session before voting on Abadi's new cabinet list.

The rebellious MPs chanted against the power-sharing agreement and the heads of political blocs, and began their sit-in inside parliament.

Sadr on Saturday accused Maliki and his followers of trying to take advantage of the parliamentary sit-in "for personal and partisan mean purposes".

"It's all about paying back. Maliki wants to hit Abadi, no matter what may be the results. Jabouri was not the target. The target is Abadi," Abdulwahid Tuama, an Iraqi political analyst told MEE. "He [Maliki] will continue until he brings Abadi down," Tuama, said. "Maliki will not stop until he gets what he wants."

To smooth the situation, Abadi offered to delay his cabinet reshuffle as "the contentiousness of this may contribute to obstructing the government's work and affect the military operations" against IS. Masoum, the president, offered to "end the political power-sharing in all the state's departments, the independent bodies, diplomatic corps and military and security institutions".

"We want to restore the prestige of the state and rebuild the executive institutions, and this can be achieved only by bringing in a wise, bold and strong prime minister," one of Maliki's aides, speaking on condition of anonymity, told MEE

"This government has weakened the Iraqi situation, so it has to be changed," Maliki's aide said. "They have been talking to us and initially we agreed on many things, but what happened will not stop at Jabouri."