Islamic State lashes out at signs of Erbil-Baghdad accord ERBIL - A huge assault the Islamic State launched on Kurdish positions in the province of Mosul on 2 August was a response to reports of newfound military and political cooperation between Baghdad and the Kurds, says the militant group. The reports follow hints at a political reconciliation between Erbil and Baghdad seen in the Iraq's parliament successful election of a Kurdish president on 24 July.

“The [Kurdish] coalition with the Safavid Shia [Shiites] and the cross worshippers [Christians] to attack the Sunni Muslims to stop them from their ‘project' to create an Islamic state resulted in all the Mujahideen standing up and fighting back,” read an IS statement posted online on 6 August after they attacked Peshmerga positions in the religiously diverse town of Gwer and Makhmour. The IS attacks, which were just 50kms from the Kurdish capital of Erbil have raised concerns among the residents of Erbil with some fleeing in the directions of the mountainous areas in the tourist resort of Shaqlawa and Maseef.

When the Islamist militants launched lightning attacks on Mosul and across army in the beginning of June, the Kurds promised help to secure Mosul. However, Baghdad refused, according to a testimony of US deputy secretary Brett McGurk. After Iraqi soldiers abandoned their posts in the face of the IS advance, Kurdish forces secured several areas – including the oil-rich, disputed province of Kirkuk – that lie outside of the official autonomous region. Kurdish president Masoud Barzani announced for plans a referendum, and further angering Baghdad, said the Kurds would independently export oil from Kirkuk that used to be under the control of Baghdad.

However, both Iran and the US have since strongly warned Erbil against seeking any form of independence, while pressuring the Kurds to work with Baghdad against the IS. Former US intelligence officer Jessica D Lewis has suggested in a report for the Institute for the Study of War that the Islamic State would exploit any Kurdish moves towards independence and minimize “opportunities for a joint military effort involving the Peshmerga, the Iraqi Security Forces, and external allies to defeat the Islamic Caliphate. Therefore, the IS did not launch any major attacks on the Kurds after 10 June”.

Baghdad's initial response to what it saw as Kurdish intransigence was to accuse Erbil of becoming a shelter for terrorists, with Shiite militias also harassing the Kurds. Halgurd Hikmet, a spokesperson of the Peshmerga Ministry, had said on 15 June said the Kurds would only defend areas they had secured after the Iraqi army fled. “The Peshmerga forces are ready to be killed for their land, but not for Arab land,” he said.

When asked if the Iraqi army could take back these areas, he suggested it would be impossible without the Kurds. “No, if we don’t help them, they can’t. Off course we are not going to help them for free,” he told Middle East Eye.

The Islamist militants assumed the Kurds would not move towards cooperation with Baghdad without recognition of their demands - such as the recognition of disputed areas as Kurdish and allowing independent oil exports. Erbil is also seeking delayed payments of the Kurdish budget and Kurdish armed forces which it says Baghdad has been withholding for months.

But since the Iraqi president was elected in July, there are increasing news reports that the Kurds will attack the IS - and the language of the Kurdish officials has started to change. On 1 August, the Kurdish NRT TV-channel reported a decisive war could be waged against the IS by Sunni insurgents inside Mosul by the Iraqi army and the Kurdish Peshmerga forces.

Senior Kurdish commanders have also said they had received weapons from Western countries, among them the United States, to attack IS militants in Mosul.

“We have re-organized ourselves and are ready. We have received the heavy weaponry we need to fight IS and will attack Mosul shortly and won’t stop until we control it,” said Major General Abdulrahman Kawreni to Bas News in August.

Meanwhile, the Iranians have ended a media campaign against Kurdish president Masoud Barzani. In the past they accused him of dividing Iraq and attempting to create a Kurdish state with the support of Israel.

On 3 August, Hoseyn Amir-Abdollahian, deputy foreign minister for Arab and African Affairs, in an interview with IRNA, suggested Barzani had ended his hostilities towards the Baghdad government.

“Barzani who is one of Iraq's old and experienced leaders, believe that all issues and initiatives progress according to the framework of the constitution and with coordination with the central government,” Amir-Abdollahian said.

When the IS launched attacks on 2 August against Kurdish positions in the Zummar and Kesik military bases, the Peshmerga withdrew to make room for Iraqi air force bombardments. And last Monday, the Iraqi PM ordered the Iraqi air force to help the Kurds.

Kurdish media reported that the Peshmerga already carried out operations in the Mosul city on 5 August in the neighbourhoods of Bu'eweza, Qahira, Gokjalil and Mosul Radio.

Kurdish officials denied that there is any deal with Baghdad and only on the ground cooperation despite of increasing reports of cooperation between Baghdad and Erbil against the growing threat.

Middle East Eye spoke to Sarbast Bapiri, the head of the Kurdistan Democratic Party (KDP) from the frontlines by telephone. “The Iraqi air force is cooperating with the Peshmerga, and there is an agreement to cooperate with us. I’m not aware if there is an agreement between the leadership with Baghdad.”

The former US ambassador to Iraq, Zalmay Khalilzad had suggested in the Washington post that the US has authorized the direct supply of munitions and weapons to the Kurds in agreement with Baghdad, and coordinated “Iraqi air attacks against Islamic State targets relevant to the defense of the Kurdish region”.

However, Kurdish Foreign Minister Falah Mustafa Bakir complained in an interview with Middle East Eye that they have not received any weapons yet.

“What we want is urgent needs to defend the people of Kurdistan and the region - that is our call for the international community. We don’t want bureaucracy, we don’t want delays. It is time that promises to be turned into fulfilled steps,” he told Middle East Eye.

But he confirmed the Kurds will now fight the radical group. “Da?esh [the Arabic acronym for IS] is a serious threat, a dangerous threat, a terrorist organization, and we need to be helped in order to defend our people. And we said it yesterday at the time we were on the defensive the day before yesterday, after the call of president Barzani we have to go on the offensive.” Iraq at War
Bomb blasts kill 10 in Iraq with death toll at 1,600 in July alone 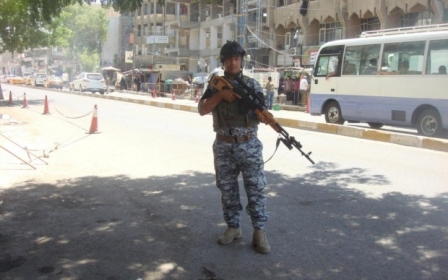